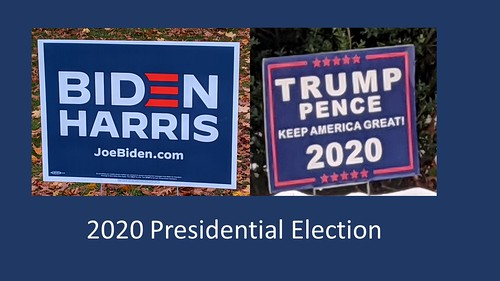 The only issue on which people across the country might fully agree is that there is much at stake in today’s election. Otherwise the country is as divided as it has been since 1968, or perhaps even since the Civil War. The outcome of this election won’t mend that split, but it is a fork in the road: will the country stay on the same path or will it choose a different direction?

That said, here are some things to look for as results are reported tonight and, I suspect (fear?) over the next few days.

Since two of the last three Presidents have been elected even though they lost the popular vote (Bush in 2000 and Trump in 2016), we all know that electoral votes decide who becomes President: 270 are need to win. Rather than list all 50 states and their corresponding electoral votes, I have instead listed a dozen or so in which the electoral outcome does not seem preordained. They are listed in alphabetical order. Separate Congressional Districts in Maine and Nebraska are included since their one-each electoral vote goes to whomever wins that District:

One thing I’ve learned (or concluded) over the past decade it that the country is ungovernable unless the same party holds both the Presidency and the United State Senate. Right now, there are 53 Republican Senators to 47 Democratic Senators or Independents who side with the Democrats. Here are some of the closer Senate races on the ballot this year with “R” for Republican, “D” for Democrat, “O” for other and “Inc” for incumbent:

Georgia – Kelly Loeffler (R/Inc) vs. Doug Collins (R) vs. Raphael Warnock (D). Run off between top two needed if no one exceeds 50%.

One Response to What to Look for Tonight