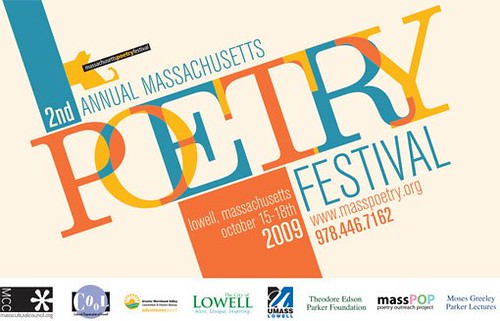 The Massachusetts Poetry Festival came to Lowell in 2008 and again in 2009. It was a great success but a venture of that scale requires prodigious money and effort, so after two years a break was needed and the Festival moved on to Salem where it has found a long run that continued through 2018. The Festival skipped 2019 to do a one-year reset and this year’s Festival was upended by the pandemic. However, planning for the 2021 Mass Poetry Festival is already underway. A Salem-based virtual-hybrid festival will be held on May 14-16, 2021, so mark your calendars. (Visit the Mass Poetry website to learn more about the outfit that organizes these festivals and that promotes poetry throughout the Commonwealth).

Back in 2009, festival organizer and fellow blogger Paul Marion wrote the following review of the Lowell event (which hopefully will return to this city someday). 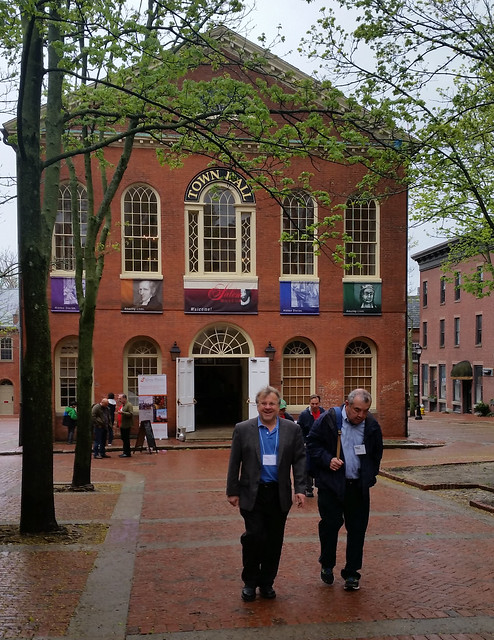 Here’s one poet’s reaction to the events yesterday at the Massachusetts Poetry Festival: “I spent six hours at the festival and enjoyed every minute. Many thanks for such a great event . . . I’ll read anywhere, a barn or a shoe factory, but that crowd at Cobblestones was as good as it gets. Wow! Onward.” Lowell had a wild weekend with today’s Bay State Marathon and yesterday’s Poetry Festival and American Studies Association Conference. There was a statewide cheerleading competition at Lowell High School in the afternoon as well.

Thanks to all the volunteers, donors, participants, writers, and everyone who helped make the Poetry Festival a success. Festival organizers report that the attendance topped 2,000 from Thursday through Saturday (not including today’s events at the Boston Children’s Museum and Harvard University).The highlight for me was the opening program of Favorite Poems in simple, but stately St. Anne’s Church, including Mayor Caulfield reading a somber Lucy Larcom poem about President Lincoln’s death, standing only yards away from Lucy Larcom Park; MassINC’s public-policy-guy John Schneider of Lowell reading W.H. Auden’s “The Unknown Citizen”; Sayon Soeun of the Light of Cambodia’s Children organization giving us Frost’s “The Road Not Taken” and breaking everyone’s heart with his dignified explanation of what the poem means to him as a survivor of the Khmer Rouge genocide; arts leader and humanitarian Nancy Donahue sharing a poem by Jake, an 11-year-old writer from Lowell; attorney and public speaker extraordinaire Michael Gallagher reciting from memory a funny fable-poem and a few lines from Lewis Carroll; Mike’s father (Charles, I think), reading Henley’s “Invictus” and another classic, “In Flanders Field,” by WWI Lt. Col. John McCrae; web guru Nicco Mele reciting, again by heart/mind, an Eamon Grennan poem; UMass Lowell Professor and Lowell resident Tony Szczesiul reading a John Ashbery poem awash in language and insightful observations; Amy Gorin of Wellesley reading a touching poem by her son in remembrance of his grandfather; host Maggie Dietz of the Favorite Poem Project at B.U. reading a virtuoso sound poem by Gerard Manley Hopkins; and Melissa Ballard of Lowell and Middlesex Academy Charter High School with a surprise, reading “The Cut”—a poem of mine about nature’s relentless self-repair. I hope I didn’t forget anyone. The audience in St. Anne’s Church experienced something very special in that opening program.

The Thursday night kick-off event in Lowell, at the National Park Visitor Center, was another memorable edition of The Cultural Lines of Poetry, which is becoming a literary tradition in the city. The Hellenic Culture and Heritage Association hosted a stunning array of writers who shared their work on the theme of “Poetry in Hard Times,” presented through the filter of their heritages. More than 70 people listened to readings by a former political prisoner in Iran, a refugee of the Liberian civil war, a young Greek immigrant writing about Greece in World War II, a nineteen-year-old Cambodian woman who is part of a youth poetry slam team that performed in Chicago, [both of the young writers are first-year students at UMass Lowell], a nephew of legendary Lowell newspaperman Charles Sampas reading his uncle’s poem of Lowell vignettes, and a handful of other writers from the area.

Another highlight for me was the program “Poems du Monde Francophone; Poems from the Francophone World” at Pollard Memorial Library with poets of Haitian heritage, including Danielle Legros-Georges of Lesley University and Cambridge “Poet Populist” Jean-Dany Joachim. Their beautifully rendered readings in two languages made the seminar-size gathering seem even more intimate.

The Small Press Fair organized by Derek and Ryan of Bootstrap Press of Lowell in the former Bombay Mahal restaurant space was a huge success. We need a space like that open 52 weeks a year. The literary products were amazing—and people spent money because you just don’t see those beautifully designed and printed books and journals full of fresh writing in one place anywhere. It was a creative-economy- encampment of publishers for the day.

One Response to Mass Poetry Festival in Lowell: 2009