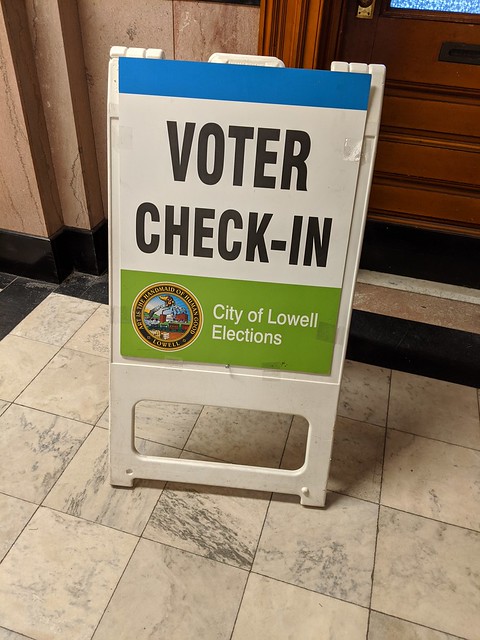 Election Day is November 3, 2020, but because of early voting and no-excuse-needed vote by mail, the process is spread out over several weeks. Whenever you do vote, here is a preview of what you will see on your ballot:

ELECTORS OF PRESIDENT AND VICE PRESIDENT

NOTE: If you are in the Sixteenth Middlesex District, your ballot will say:

If you’re in the Seventeenth Middlesex District, your ballot will say:

There are also two questions on the ballot:

This proposed law would require that motor vehicle owners and independent repair facilities be provided with expanded access to mechanical data related to vehicle maintenance and repair. Starting with model year 2022, the proposed law would require manufacturers of motor vehicles sold in Massachusetts to equip any such vehicles that use telematics systems–systems that collect and wirelessly transmit mechanical data to a remote server–with a standardized open access data platform. Owners of motor vehicles with telematics systems would get access to mechanical data through a mobile device application. With vehicle owner authorization, independent repair facilities (those not affiliated with a manufacturer) and independent dealerships would be able to retrieve mechanical data from, and send commands to, the vehicle for repair, maintenance, and diagnostic testing. Under the proposed law, manufacturers would not be allowed to require authorization before owners or repair facilities could access mechanical data stored in a motor vehicle’s on-board diagnostic system, except through an authorization process standardized across all makes and models and administered by an entity unaffiliated with the manufacturer. The proposed law would require the Attorney General to prepare a notice for prospective motor vehicle owners and lessees explaining telematics systems and the proposed law’s requirements concerning access to the vehicle’s mechanical data. Under the proposed law, dealers would have to provide prospective owners with, and prospective owners would have to acknowledge receipt of, the notice before buying or leasing a vehicle. Failure to comply with these notice requirements would subject motor vehicle dealers to sanctions by the applicable licensing authority. Motor vehicle owners and independent repair facilities could enforce this law through state consumer protection laws and recover civil penalties of the greater of treble damages or $10,000 per violation.

A NO VOTE would make no change in the law governing access to vehicles’ wirelessly transmitted mechanical data.

This proposed law would implement a voting system known as ‘ranked-choice voting,’ in which voters rank one or more candidates by order of preference. Ranked-choice voting would be used in primary and general elections for all Massachusetts statewide offices, state legislative offices, federal congressional offices, and certain other offices beginning in 2022. Ranked-choice voting would not be used in elections for president, county commissioner, or regional district school committee member. Under the proposed law, votes would be counted in a series of rounds. In the first round, if one candidate received more than 50 percent of the first-place votes, that candidate would be declared the winner and no other rounds would be necessary. If no candidate received more than 50 percent of the first-place votes, then the candidate or candidates who received the fewest first-place votes would be eliminated and, in the next round, each vote for an eliminated candidate would instead be counted toward the next highest-ranked candidate on that voter’s ballot. Depending on the number of candidates, additional rounds of counting could occur, with the last-place candidate or candidates in each round being eliminated and the votes for an eliminated candidate going to the voter’s next choice out of the remaining candidates. A tie for last place in any round would be broken by comparing the tied candidates’ support in earlier rounds. Ultimately, the candidate who was, out of the remaining candidates, the preference of a majority of voters would be declared the winner. Ranked-choice voting would be used only in races where a single candidate is to be declared the winner and not in races where more than one person is to be elected. Under the proposed law, if no candidate received more than 50 percent of first-place votes in the first round, the rounds of ballot-counting necessary for ranked-choice voting would be conducted at a central tabulation facility. At the facility, voters’ rankings would be entered into a computer, which would then be used to calculate the results of each round of the counting process. The proposed law provides that candidates in a statewide or district election would have at least three days to request a recount. The Secretary of State would be required to issue regulations to implement the proposed law and conduct a voter education campaign about the ranked-choice voting process. The proposed law would take effect on January 1, 2022.

A YES VOTE would create a system of ranked-choice voting in which voters would have the option to rank candidates in order of preference and votes would be counted in rounds, eliminating candidates with the lowest votes until one candidate has received a majority.

A NO VOTE would make no change in the laws governing voting and how votes are counted.

Here’s my attempt to illustrate how Ranked Choice Voting would work:

Let’s say the election is to choose the top flavor of ice cream. There are four candidates:

The ballot will list all four candidates and after each candidate name there will be four ovals, numbered 1, 2, 3 and 4. Instead of voting for just one flavor, you vote for all but you rank-order them. Here is how I would vote:

There are 100 ballots cast. The winner will be the first candidate to get 50% plus 1 ballots (51 ballots in our example). In the first round of counting, here is the vote tally:

No candidate reached 51 ballots in the first round, so the last candidate – Coffee – is eliminated and the ballots who had listed Coffee as #1 are redistributed based on which flavor was designated #2.

Those who picked Coffee for #1, picked the following for #2:

Those new ballots are added to the tally from the first round which gives the following result:

Still no candidate with 51 ballots. The last candidate left – Strawberry – is eliminated and the 16 original Strawberry ballots are redistributed in accordance with their second choice (and for the 1 ballot from Coffee, per their third choice).

This new distribution redistributes the 17 Strawberry ballots as follows:

So the new tally is:

Chocolate now has more than the 51 ballots needed to win the election and so is the winner.

If this seems complicated, it’s because it is complicated. However, with computers doing the counting, the calculations can be done much quicker. While computers are not infallible and pose security risks, the math behind the calculations is straightforward and there is a paper record to examine if any discrepancies are identified.

Setting aside the mechanics of how the votes are counted, the bigger issue is whether this is a better system than our current “whoever gets the most votes wins” system. The problem with the current system arises most often in primary elections with crowded fields. If you have ten candidates, the winner might “win” with less than 30% of the vote. Advocates for ranked choice say it requires the winner to get more than 50% of the vote, even if those votes are the second or subsequent choice of the individual voter.

I feel that in a race for a single seat (as opposed to a vote-for-nine city council election, for example), the ranked choice result would better reflect the wishes of the majority of the electorate, so I’m planning to vote YES on Question 2.

As for Question 1, I’m still not sure. Generally, I assume someone already has access to my data so I guess I’m a realist when it comes to what information we’re able to protect. If this data is so sensitive, the fact that car-makers and their associates already have access to it does not ease my concerns. But I really think this is more of a prospective measure meaning those of us with older cars don’t even have the technology this question addresses. Nearly ten years ago, voters passed a Right to Repair law which mandated that independent repair shops would be given access to the manufacturer’s onboard computer systems so anyone would repair your car, so that’s already covered.

This question deals with information transmitted wirelessly from your vehicle. For example, if the air pressure in my tire drops below a certain level, a warning light flashes on my dashboard. With this newer technology, the car might send a signal to the dealership saying your car’s tire was going flat. The dealer might then send you an email, a text or a phone call telling you about the great deal they have on new tires. You want your problem fixed ASAP, so you head for the dealership. The independent repair shop is left out.

As I understand it, this law requires car manufacturers to create a network to carry this data but that the network not be proprietary to the car manufacturer and its dealers; that any repair shop can access this network and the data being carried by it.

Right now, this network doesn’t exist and the law is not very clear about who would create, maintain and secure this network. The law also requires this all to be done by 2022.

This is probably an issue best dealt with by the state legislature which could hold hearings and take evidence and make a law and regulations governing this very complex issue. But because it’s so complex, the legislature hasn’t done anything about it. That’s why we have a ballot question: someone is trying to force the legislature to act which it will do if the question passes.

I’m not all that concerned about someone monitoring my driving habits. I assume that’s already being done between my GPS system and my satellite radio. What I am concerned about is the security of a network that has access to my car’s full operating system. I don’t want to be cruising down Route 3 some day and have a hacker turn off my engine and cause me to lose control of the car. Or be unable to lock it. Or be unable to start it.

It’s said that if someone doesn’t understand a ballot question, or is unsure of what it will do, they are likely to vote No on it. I haven’t made a final decision on how I’m going to vote on this question.