Charles Bukowski (1920-1994) was a German-American poet and writer who was a contemporary of Jack Kerouac but never a part of the Beat Generation writer scene. Still, Bukowski, who was known as the “Poet of Skid Row” and was called by Time magazine “the laureate of American lowlife” had a large following. In this, the 100th anniversary of Bukowski’s birth, there is a new biography, reviewed here by David Daniel. 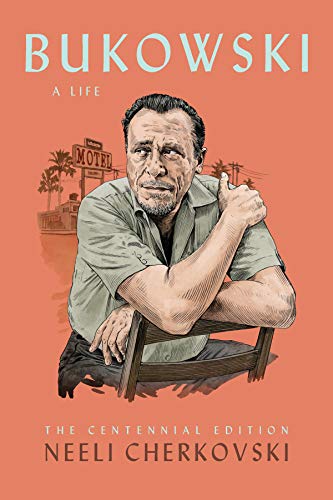 When Ernest Hemingway was once asked to describe the best preparation for being a writer, he cracked, “an unhappy childhood.” Charles Bukowski stands as a testament to that truism. “Fear made me a writer,” he said,  “fear and a lack of confidence.” This year marks the centennial of Bukowski’s birth and, along with a new documentary film and reissues of some of his numerous books, comes this illuminating biography.

Henry Charles Bukowski was born in 1920 in Andernach, Germany to a German mother and American G.I. father who’d met in WW I. When he was three, the family returned to live in Los Angeles. A sullen and lonely child, Bukowski was teased in grammar school for the slight German accent he hadn’t lost yet. His father, a strict perfectionist, beat him for minor childhood failings. As an adolescent he was afflicted with severe acne, which ravaged his face and upper torso with boils; these scars, both inner and outer, never left him. He had few friends and, as with many a sensitive kid, rebellion ensued. He became defiant, a scrapper, very much the rebel. Decades later he chronicled these pained, cruel years in his novel Ham on Rye.

His discovery of the local library is probably what saved him. “The library was another world,” Bukowski said, “another people. It roared and leaped.” There he discovered writers like John Fante, Dostoevsky, and Hemingway, who showed how one could use words to make order of life’s pain, prompting him to undertake his own nascent efforts at writing.

It was a long quest, full of deprivation; but once embarked upon, although he often feared Skid Row would be his final destination, he went at it with determination. He left his unhappy homelife, traveling around the U.S., living on the cheap in New Orleans, St. Louis, and Philadelphia, working at odd jobs to pay rent, and all the while writing, collecting piles of rejection slips. Ultimately, he returned to Los Angeles, and it was there that he staked the literary turf that would be his for the next forty-plus years.

Bukowski’s L.A. is not palmy La La Land. He and his characters inhabit the dilapidated, seedy districts that Raymond Chandler’s Phillip Marlowe knew: old stucco rooming houses, dive bars, and the broken-down denizens they attract. Failure continued; but, believing in himself, so did he.

Because they came more easily, he turned from stories to poetry. His poems had a direct, street quality, hyperbolic narratives of drunkenness and harlotry told in a language that often transcended its subject. His verse began to find a home in the little magazines that proliferated around the county during the ’50s, many were simple mimeographed and stapled affairs, often sloppily edited.

By the late ’60s Bukowski had garnered a growing renown in underground circles. This was how I first came to read him, when a fellow student at the University of Oregon told me about his newspaper column, Notes of a Dirty Old Man, in an L.A. weekly newspaper. “You’d like him,” he said, “he’s no b.s.” Over the ensuing years I read a lot by the man dubbed the poet of Skid Row, admiring his tough, deadpan style, but seeing, too, that his spirited celebration of the ordinary was in the lineage of Whitman and Sandburg.

Bukowski, A Life paints a rich portrait of its flavorful subject, who chose to be an outsider, living in furnished rooms, driving worn-out cars, working at dead-end jobs that he’d invariably quit or be fired from. He eventually settled into the tedious routines of the Post Office. But, as he proclaimed early on, “When I decided on this writing game, it meant blood on the line.” He persevered.

He believed that writers are made, not born, and so, with beer and smokes and classical music on the radio, he would sit down at his “typer” and work, taking all his hard luck days as the building blocks for his art and producing prodigious amounts of work. Eventually, he attracted enough readers; in the early ’70s he could finally quit the Post Office. As with the death of his father years before, he experienced a sense of freedom, of a two-ton weight taken off his shoulders.

Bukowski’s most inspired creation is himself — often in the form of his alter ego, Henry Chinaski,  protagonist of most of his stories and novels. Cynic, lover, fighter, loser, survivor, Chinaski has heart.

The themes of Bukowski’s writing break along natural fault lines and clashing power differentials: landlord/renter, boss/worker, man/woman. He saw it as his cultural role to be on the margins, an underdog, a voice for the dispossessed. His ethos, if he can be said to have one, is a rejection of the grinding forces of conformity and middle-class values that he’d witnessed as a youth.

Biographer Neeli Cherkovski does justice to this commitment to rebellion. A well-regarded California poet and critic, he brings an insider’s familiarity, having been Bukowski’s friend for many years. With that access, including hours of their taped drinking sessions, he does a skillful job with the background details, the years of struggle, growth, and success. Some of the most insightful and moving parts of the narrative are Cherkovski’s personal recounting of his on-again off-again relationship with the writer, which has the poignancy of personal memoir. To his credit, Cherkovski he doesn’t spare us the writer’s dark parts, noting Bukowski’s sometimes loutish behavior: exposing himself outside a theater in LA’s tony Westwood Village, abusing friends, being possessive and jealous with lovers, and the hangovers and the puking. One important element the book is missing is a photo section with views of the key characters in Bukowski’s life.

Bukowski’s last novel, Pulp, was published in 1994, the year of his death. By that point Bukowski had enjoyed ever-growing acclaim and readership. He had begun to mellow. He never won any major literary awards, and wasn’t formally canonized, but the very fact of his being subject of a half dozen biographies suggests how his work still has the power to engage readers across generations. There is something very American in the arc of his story. Still, it begs the longer-term question: will he endure? I think so. In his novel Factotum, Bukowski observes that (I’m paraphrasing): when you’re in a bar, drinking, the world doesn’t go away. It’s still out there, but for the moment at least, it doesn’t have you by the throat. His books will offer future readers this hardscrabble vision, with its bittersweet solace, its sympathetic understanding of just how much survival takes out of you. “When people read me,” he said, “I want to think of them as not reading literature but actually participating in life.”

Almost forty years after my classmate recommended Bukowski to me, telling me he was “no b.s.” I used almost the exact same line when I gave my copy of Post Office to a Viet Nam vet postal worker I know. A few days later, he told me he’d loved the novel and had already ordered more of Bukowski’s titles. It’s the kind of working-class homage Bukowski would have loved.

2 Responses to Charles Bukowski: On the Beat Margins