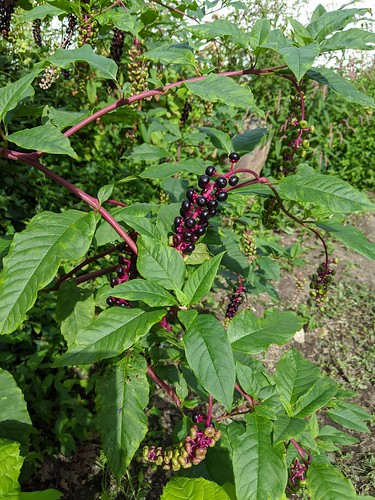 For weeks I had noted the increasing height of the plants shooting up from the untended compost pile in the corner of our backyard. With 20-plus years of accumulated organic matter, there was no telling what was growing. One recent morning when I let our 12-year old Yellow Lab Ivy out to stretch her legs before I headed to work, I wandered over for a closer look.

A half dozen tall pink stalks were growing from a single root in the center of the pile. Each was the width of the handle of a 32-ounce baseball bat. This sturdiness was needed because the plants were weighted down by big clusters of purplish-black berries that glistened in the morning sunshine.

Had it been earlier in the morning, I might have snapped off a bunch and brought them inside to add to my morning cereal. Whatever these were, they looked much tastier than the antiseptic blueberries that came to us in a clear plastic container from someplace far away. But I had already eaten breakfast and it was time to go to work. Maybe later.

Before heading into the house, I remembered a great new app I had just installed on my phone. Google Lens is image recognition software. You take a picture of something and Google’s vast network of servers identifies what is depicted in that image and returns confirmatory images and an encyclopedia’s worth of information about the thing you photographed. I opened the app, pointed my phone at the big plant, and pressed the shutter-button. The app worked its magic in seconds.

Pokeweed. That didn’t sound very appetizing. “Phytolacca americana, also known as American pokeweed, is a poisonous, herbaceous perennial plant growing up to 8 feet in height with red or purplish stems and purple to almost black berries.” Poisonous? How poisonous? “Symptoms of poisoning include a burning sensation in the mouth, salivation, gastrointestinal cramps, and vomiting and bloody diarrhea, and depending upon the amount consumed, anemia, altered heart rate and respiration, convulsions and death from respiratory failure.”

First thing Saturday  morning I suited up in “working-with-poison-ivy” levels of protective clothing, grabbed a shovel, and proceeded to hack and dig the pokeweed plant until it was disconnected from the earth. I’ll let the cut stems erode over the winter and follow through on my plans to replace the compost pile with a patch of grass come spring.

My close  encounter with pokeweed brought to mind “Into the Wild,” the 2007 film based on a Jon Krakauer book about a young man who ventures into the Alaskan wilderness to live off the land. Wracked by hunger, he resorts to eating roots and berries until he misidentifies a poisonous plant for an edible one with tragic results.

Instead of me going into the wild, the wild was coming into my backyard, not just the flora, but also fauna. Except for living away at college and during my U.S. Army years, I’ve lived in the same corner of the same neighborhood since 1970. In all that time I never remember encountering so much wildlife in close proximity. 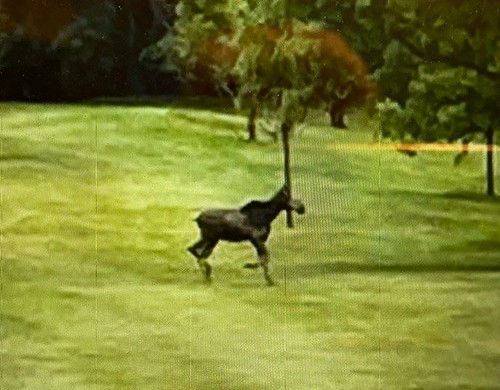 Perhaps the most startling episode occurred last spring. It was early on a work-from-home day when Roxane, in the midst of a Zoom call, blurted out, “A horse just ran down my street” and scrambled to the living room picture window for a better look. The horse turned out to be a young moose but it was indeed trotting down the middle of our residential road. (The moose made a wide loop through the Highlands and Middlesex Village and was eventually and safely subdued and relocated when it went for a cooling dip in the Merrimack River). 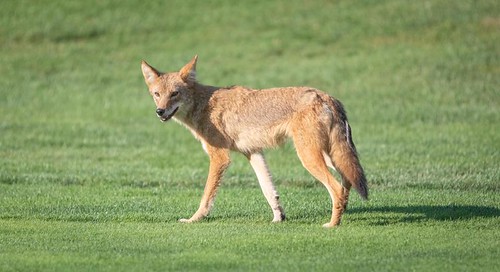 Just two weeks ago as Ivy and I were returning from our pre-dawn walk, the silhouette of an animal emerged from some bushes 30 yards in front of us. The sleek profile and pointy ears suggested a fox, but it was bigger than that, and I immediately thought of the coyote said to be lurking in the neighborhood all summer. I coughed to alert him to our presence. As Ivy pulled at the leash, anxious to investigate this new thing, the animal traversed its head in our direction, noted our presence, then turned down the street and trotted ahead as if it was leading us back to our house. Eventually he turned into a yard and disappeared, much to my relief. 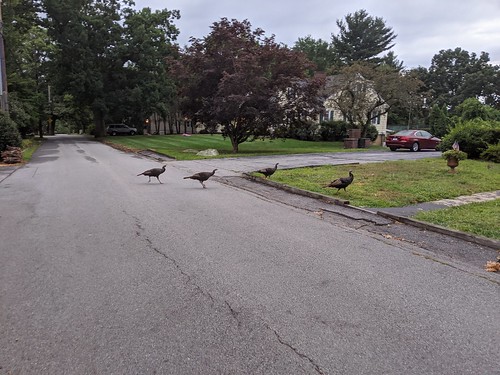 Then there are the ever-present turkeys. The only turkeys I ever encountered growing up came on a platter at Thanksgiving and Christmas. But now there’s a flock that’s taken up residence in our neighborhood. Usually they’re grazing in the front yard, but they can turn up in strange places, like standing atop our six-foot high backyard fence. And they do fly, not gracefully, but enough to get up into a tree and away from danger.

The moose, the coyote, and the turkeys have made the most lasting impressions but for sheer numbers, more familiar creatures are the dominant species. Daytime is dominated by gray squirrels who expend great effort digging small holes in our backyard. I once read that to preserve their winter food supply, squirrels will bury acorns in one place, then go back and retrieve the acorns but leave the cache looking like the food is still there, a kind of disinformation campaign to deceive their food-competitors. 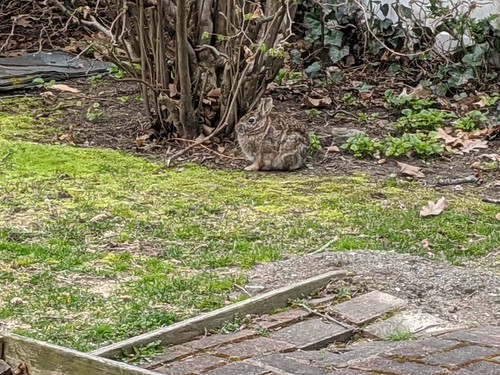 The rabbit’s dilemma: stay in the tan foliage and by invisible or venture out into the tasty green grass and be seen.

At dawn and dusk, Team Rabbit takes over. My aspiration for a lawn is something that is green so the backyard provides an exotic buffet not found amidst the homogeneous fescue and rye tended by neighbors. For rabbits, there’s good eating in this yard, but not without some risk. Our rabbits haven’t yet made the connection between the spotlight coming on and the dog coming out. While Ivy would love to chase them, her arthritic knees wouldn’t tolerate such broken field running, so she gets led out on a leash whenever a rabbit is present. By freezing in place, I suppose the rabbits hope their natural camouflage protects them, but that doesn’t work with a tan coat on a green grass background. As the frantic but still-leashed dog draws closer, the rabbits suddenly sprint for the fence and one of their escape tunnels underneath it.

Maybe it’s because of memories of Chip ‘n Dale, the 77-year old Disney cartoon characters, but I find chipmunks to be the most amusing of creatures in my world. One moment they’re posing on a rock, nibbling on something held in their small hands, the next moment they’re zipping across the ground like a rocket car on the Bonneville Salt Flats. My affection for chipmunks is tempered by a slightly twisted ankle suffered when some brick patio pavers I stepped on out back caved into the quarters our tenants had constructed underneath.

Finally, there are the skunks. They’re early risers too so there is always the risk of a nasty encounter on pre-dawn walks. There seem to be fewer this year, or perhaps our schedules don’t yet match. I venture out when my alarm goes off; they venture out just before the sky lightens. Like the broken clock that’s right twice a day, our schedules overlap once in the spring and again in the fall. But perhaps the naturalistic gentrification of the neighborhood has forced the skunks to move elsewhere.

Is there more wildlife this year than ever before in my lifetime? Or am I just home more often, sometimes working from home, rarely leaving the yard on weekends and evenings? Maybe I’m just being more observant. But I would have remembered a moose, or a coyote, or wild turkeys, so something is going on. 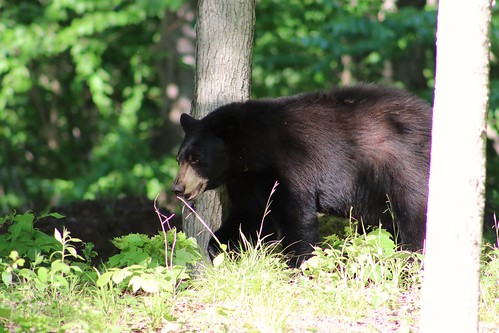 A backyard bear in the Berkshires

I’ll close with a reminder that everything is relative. On the day I encountered the coyote, I had a work-related telephone conversation with a western Massachusetts colleague. Excitement over the coyote caused me to mention that encounter but my enthusiasm was deflated by her matter-of-fact mention of dodging bears when walking near her home.

Bears. I haven’t yet seen one of them in my neighborhood but as we always say in another context, “Wait ‘till next year.”

2 Responses to Nature Comes to Lowell