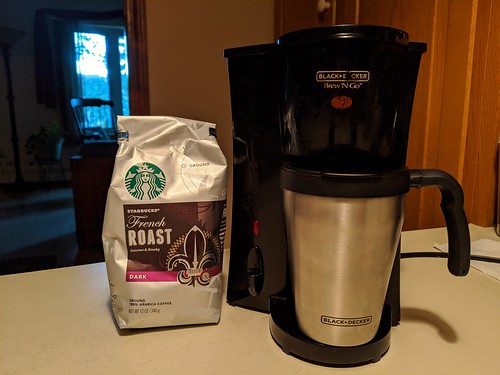 Did Someone Say ‘Coffee’?

Early in my married life I made coffee in a Proctor Silex which, if I’m not mistaken, consisted of an arrangement whereby the coffee flowed from one glass section to another, up or down, I don’t remember. I probably used Maxwell House coffee that came in a can. The resulting cup of coffee was unfailingly excellent. Then the PS broke. I believe I tried unsuccessfully to replace it (“Sorry, we don’t make those any more”) or I possibly found some non-glass replacement that wasn’t as good.

Fast forward an indeterminate amount of time, and I remember complaining to someone that French Roast coffee was too strong. However, I corrected that character flaw and have enjoyed Starbuck’s French Roast for many years now. Dinner guests are consistent in their opinion that my coffee is too strong. The fault clearly lies in my selection of guests.

Millions of people obviously like Dunkin Donuts coffee. I very much dislike it and will drink a cup only if there’s no other coffee available anywhere in the world.

I have had some success using French press coffee makers. Done right, they produce a cup that shouts COFFEE. However, the process has to be carried out with perfectly ground fresh beans, the exact amount of water and the precise steeping time before pouring. Otherwise, you can end up with another cup of piping hot coffee-flavored water.

When all is said and done, here’s what actually happens in my kitchen circa 7 a.m. daily. I grind three scoops of Starbuck’s French Roast beans and put the ground coffee and two cups of water into my Black and Decker coffee maker and press the button. Voila! I enjoy the wonderful aroma of Juan Valdez’s mule and a steaming nectar that catapults me into the day. You probably wouldn’t like it.

4 Responses to Did Someone Say ‘Coffee’?