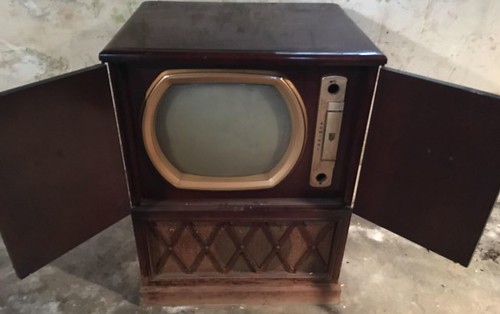 A Different Kind of Dying

Once a year, in late September, the town holds a drop-off at the DPW garage for used electronics. In advance of the event, notices appear in the community weekly newspaper, and on flyers affixed to telephone poles:

The television sets arrive with a last gasp, all those Sonys, Mitsubishis, and Trinitrons—even the occasional Zenith and Admiral—that once occupied places of pride in parlors and dens and basement rumpus rooms, washing viewers in a flittery bath of cathode light. Replaced now by wafer-thin models with screens the size of Rhode Island, they are hauled away, to some final destination.

Imagine such a place, miles and miles from nowhere, where TVs go to die.

There, in the early-coming Autumn dark, when the moon is on the rise and a mist hovers over the meadows, something strange occurs. Drawn like pallid moths, television stars of bygone days, appear.

Orphaned by time, they gather, come together as family to relax and feel appreciated after lifetimes of work. Lucille Ball to Dinah Shore, David Carradine to David Cassidy, Robert Guillaume to Rod Serling—they sit on old sofas, sprung wing chairs, punched-out hassocks, and watch themselves in re-runs on the abandoned screens of the still-living.

Buddy Ebsen remembers his Beverly Hillbillies days as Jed Clampett and his later incarnation as Barnaby Jones, chasing crooks on arthritic legs. Harriet Nelson, June Cleaver, Carol Brady, and Claire Huxtable sit around a Formica kitchen table and dish good-naturedly about the kids. William Conrad is Cannon, swinging the car’s tilt-wheel away from his big belly to climb out wheezing and solve the case. Lovely Donna Reed kisses her TV children and husband and sends them off to school and work.

John Mahoney and Dennis Weaver, as Martin Crane and Chester, are comparing limps. Telly Savalas is sucking on a lollipop. The crew of the S. S. Minnow, free at last to leave Gilligan’s Island, can’t quite loose the mooring lines and get on with it, so Mary Ann flashes an elfin smile and they settle into nautical chairs. Edd “Kookie” Byrnes still parks cars at Dino’s. Matlock spanks the Mayberry dust off his seersucker sport coat. Raymond Burr wins a final case and trades in the counsel table for a wheelchair.

In the old melancholy of September, when new series are piloted, these viewers only have eyes for the past. Without the makeup and lights, pallid as paste, they watch their flickering images on MeTV. As barrel fires give warmth to homeless folk, our cast-off television sets welcome the stars of yesteryear and, home to roost, they find solace in Willoughby, in Petticoat Junction, and in the Naked City. The bar stools are full at Cheers.

But these are ghosts. They won’t wake to see crystal dawn or hear the honk of geese flying south. This is their time, here in the flickering of fairy-light in the great surrounding dark, under the sad-faced moon.

They have no concept of “on demand”, no sense of “streaming”. “Binge watching”  means nothing to them. There are no new seasons. No more residuals; that clock has stopped. Theirs is the world of the laugh track and theme songs, of the sitcoms and soaps and melodramas—the 1001 tales of the Scheherazade nights. They are the glass people. Growing small, ever smaller, as the television screens grew large and larger, they finally winked out on their own.

Nick Adams, Joan Davis, Gardner McKay, Hugh O’Brien, James Arness, Eve Arden, Tony Randall, Florence Henderson, Redd Foxx, Richard Boone, Andy Kaufman, Diahanne Carroll, Carl Reiner, and all the many more, all the haunt-eyed faces in the sullen dying autumn. These are the twilight folk, who’ve lived their lives in 22-minute and 54-minute segments, who’ve loved and fought, lost and failed, as I have, too. As shall we all.

I think of lines from Shakespeare:

Fear no more the heat o’ the sun,
Nor the furious winter’s rages;
Thou thy worldly task hast done,
Home art gone, and ta’en thy wages:
Golden lads and girls all must,
As chimney-sweepers, come to dust

10 Responses to A Different Kind of Dying