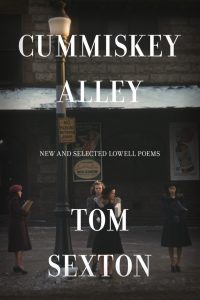 The author of many collections of poetry, Tom is a former Poet Laureate of Alaska who grew up along the Concord River in Lowell. This book brings together the best of his writing about his hometown, which he left in the 1960s but never left behind. He’s returned many times, including to be honored as a Distinguished Alumnus of Lowell High School. The Lowell poems not only recover the lost city of his youth but also track the changes in Lowell as the city weathered an economic collapse in the mid-20th century before gathering itself again as a hopeful community.

Cummiskey is Hugh Cummiskey, a 19th-century labor leader whose Irish immigrant workers dug Lowell’s power canals and built textile mills. Tom’s poems are more of the moment than historical, but he is cognizant that time past exists in time present. Like his much-praised poems of the natural world in the Northwest, Tom’s urban compositions rise on keen observations and telling insights about people and place—and the power of lasting stories.

For most of his life Tom has been in Alaska with his wife, Sharyn, writing, teaching, editing a respected literary journal, and always observing the large and small wonders in the world. He’s filled many books with poems that tell us what he’s seen and heard and felt.

In the Northwest and around the Pacific Rim, Tom is known as a premier poet of the natural world, from birds to mountains. But there’s another side to this writer, a deep investigator and lyrical beat reporter whose subject is his working-class, ethnic-American hometown where he’s returned regularly, sometimes anonymously to better absorb the facts and fill the blotter at the night desk in the hall of records. The poems he’s drawn from memory and recent inspection stand for the experience of a thousand small industrial cities that were made by immigrants and often got knocked down by merciless economic winds, only to get their legs back under them and move forward. As universal as they may be, places like Lowell need a literature to call their own.

The cover image is a detail of a photograph by Jack Delano of the Farm Security Administration, a federal agency that employed him as a roving photographer. The photograph is titled “Commuters, Lowell, Mass., 1941,” and the scene is the Lowell train depot on Middlesex Street. Delano at the time was documenting farm towns and factory cities whose residents were coping with the Great Depression. Tom chose this image because it represents the city when he was growing up. There’s a poem about the photograph in this new collection of poems.

The New York Times described Tom Sexton as “an atavistic avatar of how to look hard yet write simply.”

Merrimack Valley Magazine wrote: “Each poem unveils something new, and at times breathtaking, about one of the Merrimack Valley’s most diverse and interesting places . . . Sexton’s characters, relationships, and places spring from the page, brought to life by a tiny gesture or minute detail.”