Chath pierSath is a contributor to this blog who lives and works on a family farm in Bolton, Mass. His new book On Earth Beneath Sky, a collection of poems and prose sketches, will be published by Loom Press. The book is available now for pre-ordering at www.loompress.com — The publication date is expected to be Sept. 21. Chath will have the book to sell at farmers’ markets in the area this fall. It will also be listed on amazon.com

A survivor of the Khmer Rouge genocide in Cambodia, Chath came to America as a boy and made a life for himself. A graduate of the master’s program in community social psychology at UMass Lowell, Chath lived in Lowell for several years while working on youth education programs. He is the author of three books and is represented in many anthologies of writing including Children of Cambodia’s Killing Fields: Memoirs by Survivors. He is known internationally as a painter who has shown his artwork in Europe, Asia, and the U.S. 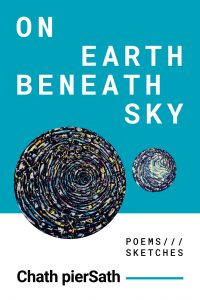 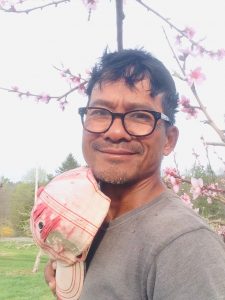 My Mother Wanted My Brother to Take Me Back to Her

No. I can’t risk your life and mine a third time.

The jungle is thick with mines and Thai pirates.

What is she thinking?

Does America have rivers I can swim in?

Will there be rice fields to roam and trees to climb?

Will there be fish to catch?

America has everything and more—school, your future, he said.

I’ll go with you then.

After I’ve learned something to make her proud of me.

Once we get on that bus, you won’t be able to see her for a while.

I can still send you back with a friend.

No, I want to go to America with you, I said.

She won’t know I got on the bus.

She won’t think of me in a place she hasn’t seen.

She won’t miss me at the border she refused to cross.

The farther away I am, the closer she’ll be to me.

Once I got on the bus,

Time sped past my goodbyes.

The bus was that time without my mother

Unlike my time on a train with her.

She took care of me,

So now I had to take care of myself.

From a bus and into a plane.

The route back to her was air thick with puffy clouds.

I thought—I won’t see her again.