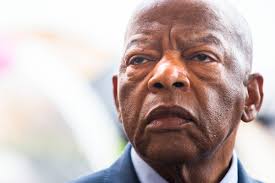 7 Responses to ‘When I Heard John Lewis Speak’: Lianna Kushi