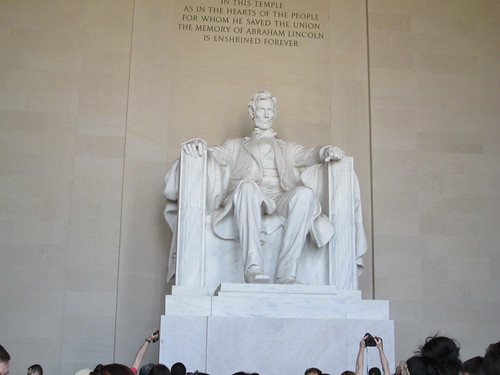 Best known for creating the Abraham Lincoln sculpture at the Lincoln Memorial in Washington, Daniel Chester French (1850-1931) had a number of Lowell connections. 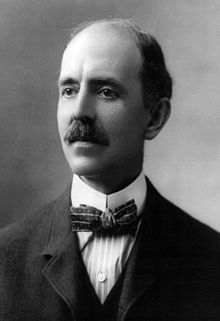 One link was familial: his grandfather, William M. Richardson, was born in Pelham, New Hampshire, in 1774. At age 23, Richardson graduated from Harvard and began practicing law in Groton, Massachusetts. In 1811, he was elected to Congress, succeeding Joseph Bradley Varnum in representing the district that included this part of Massachusetts. Although William eventually moved his family to Portsmouth, New Hampshire (he eventually became the Chief Justice of the New Hampshire Supreme Court), he left a number of cousins in this area.

In 1838, William M. Richardson’s daughter, Anne, married Henry Flagg French who was from Exeter, New Hampshire. French was a lawyer who was appointed Assistant Secretary of the Treasury by President Ulysses S. Grant, a position he held for many years. Before moving to Washington, Henry and Anne French had four children, Henriette (1839), William (1843), Sarah (1846), and Daniel (1850).

When Henry French’s stint at Treasury ended, he moved the family to Concord, Massachusetts. Daniel showed little interest in most academic subjects but was enthusiastic about sculpting from a very young age. In Concord, he took art lessons from May Alcott (the sister of Louisa May) and then became friends with a neighbor, Ralph Waldo Emerson. Dan showed clear talent for sculpting and sold some of his early figures to commercial manufacturers who mass marketed them for the emerging American middle class.

As 1875 approached, the citizens of Concord planned a major celebration to observe the centennial of the April 19, 1775, battle that launched the American Revolution. Although enthusiasm was in high supply, funds were not, so when it came time to hire an artist to create a statue to be unveiled at the centennial celebration, the committee turned to young Dan French even though he had never created anything like a public monument. 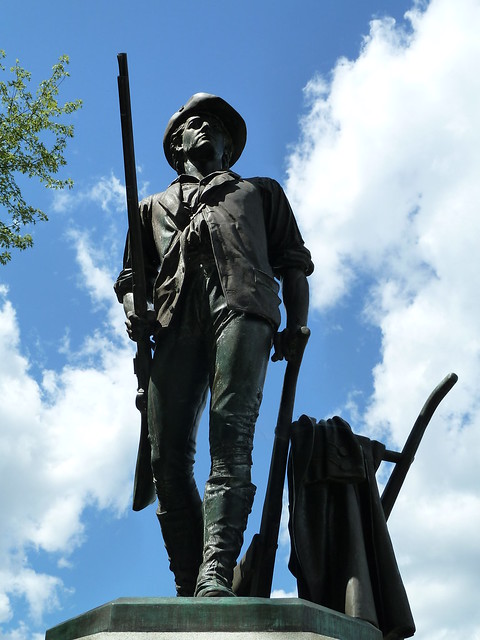 French seized the opportunity and labored mightily over his creation which was unveiled to great acclaim on April 19, 1875. However, Dan chose not to attend the unveiling, having already departed for Italy where he was to apprentice with the American artist Thomas Ball who had a studio there.

Returning to America after two years, French received a steady stream of commissions for public monuments. He soon concluded that while his training in Europe was useful, it was his uniquely American sense of art that yielded his greatest works which culminated with Abraham Lincoln (1920).

As Daniel Chester French became America’s most beloved sculptor, his sense of fairness and generosity never lagged. He was particularly well-known for mentoring and promoting the careers of younger artists which is how we circle back to his connections to Lowell. 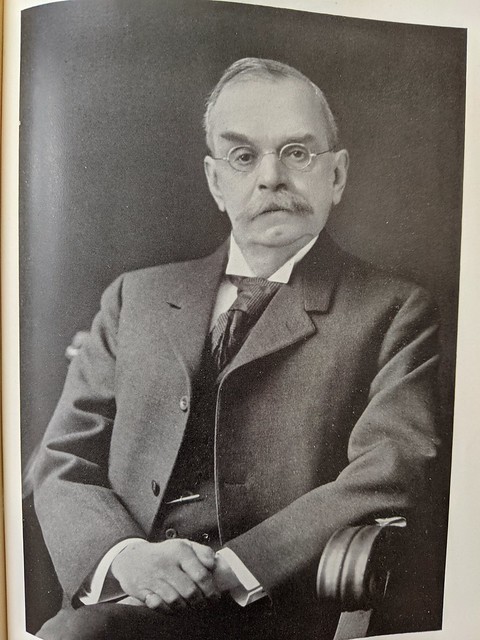 One of Daniel Chester French’s Lowell area relatives was George F. Richardson who was born in Tyngsborough in 1829. George’s father, Daniel, was a lawyer with a thriving practice and all three of his sons, Daniel Jr., William, and George, also became lawyers and partners in one of Lowell’s most prestigious law offices. (Brother William went to Washington, D.C. to serve in the Grant Administration and eventually became Secretary of the Treasury).

In 1886, George Richardson got a new case which at first seemed to be a routine probate matter. A longtime mill worker, Louisa Maria Wells had died of heart disease at age 69. Louisa had never married, had no children, and no siblings. Her father had died long ago and her mother, with whom she had lived through most of her life, had predeceased Louisa.

Louisa was born in Vermont but came to Lowell in 1836 to work at the Lawrence Manufacturing Company. That same year she opened a saving account at the Lowell Institution for Savings with an initial deposit of $27. Louisa kept working and kept saving. When she died in 1886, she had amassed more than $5,000 in savings (about $150,000 in today’s dollars).

In her will, which was to be probated by Attorney George F. Richardson, Wells directed her executor to use her savings to purchase a lot in Lowell Cemetery and to obtain a suitable monument for her and her late mother (whose body would be reinterred in the Lowell Cemetery lot).

Louisa did not have any siblings but she did have cousins and those cousins thought her estate would be better spent on their worldly needs than on a cemetery monument, so they contested the will. The matter dragged on for nearly 20 years, but the Middlesex Probate Court upheld the will and directed Attorney Richardson, as her executor, to carry out her wishes.

Richardson wrote to his cousin Daniel Chester French and offered him the commission to create a monument for the late Ms. Wells. French replied that he was too busy to take on a new project but he recommended that Richardson hire Evelyn Longman, a talented young artist who had worked for French but now had gone out on her own. 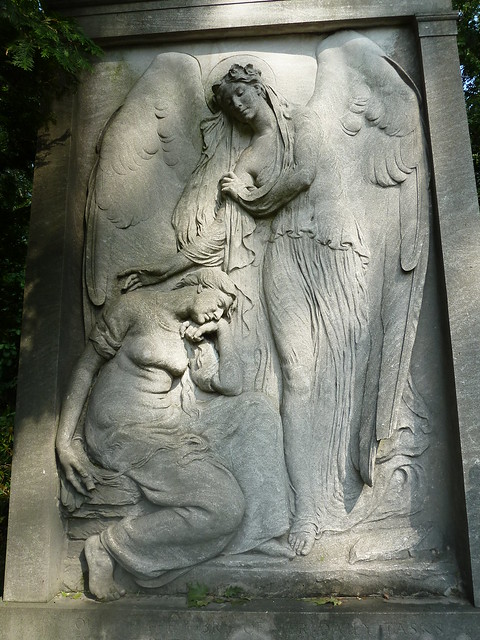 Richardson hired Longman, paying her $5,000 for a bas-relief monument that was erected in 1907. It  has become one of the best known and most admired in Lowell Cemetery. The sculpture depicts the Angel of Death (or Mercy) comforting a tired mill girl who has an unraveling bobbin of yarn in her hand. The epitaph reads “Out of the fibre of her daily tasks, she wove the fabric of a useful life.”

The Louisa Maria Wells monument is one of several in Lowell Cemetery whose beauty and skillful presentation lift them out of the category of “cemetery monument” and into the “work of art” class. 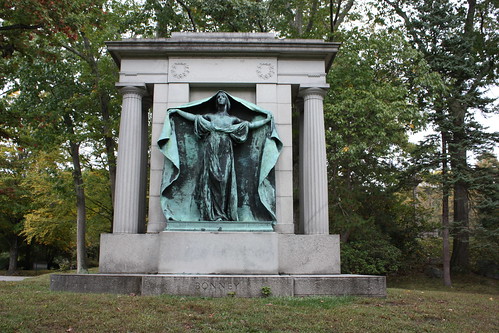 Another such monument memorializes Clara Bonney, a young mother who died of tuberculosis in 1892. Upon her death, her husband and father hired Frank Elwell who was the curator of Sculpture and Egyptian Art at New York’s Metropolitan Museum of Art to sculpt a unique monument for her. Elwell called the resulting statue “New Life.” When Elwell was first starting out as an artist, he worked as an assistant to Daniel Chester French. While there is no documentary evidence that the Bonney family first solicited French to create a monument for Clara, it seems unlikely that the family would have went directly to Elwell who had no known Lowell connections. 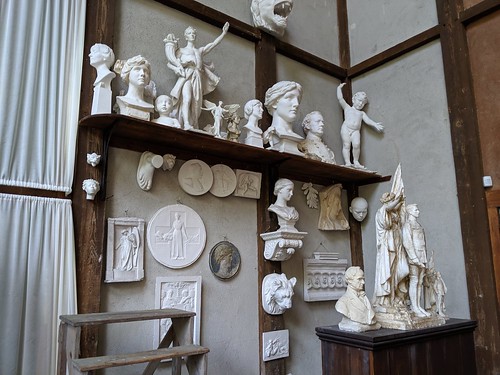 Studio of Daniel Chester French at Chesterwood in Stockbridge, Mass.

Circling back to Daniel Chester French, besides the Concord Minuteman and Washington DC’s Abraham Lincoln, his works are scattered across the United States. Fortunately, a number of his most notable pieces are nearby including John Harvard in Harvard Yard in Cambridge; General Joseph Hooker at the State House in Boston; General Charles Devens at the former Superior Courthouse in Worcester; John Boyle O’Reilly at Boylston Street and the Fenway in Boston; and Wendell Phillips in the Public Garden in Boston. We don’t have one of French’s works here in Lowell, but we do have two notable pieces by his mentees, Evelyn Longman and Frank Elwell, at Lowell Cemetery.