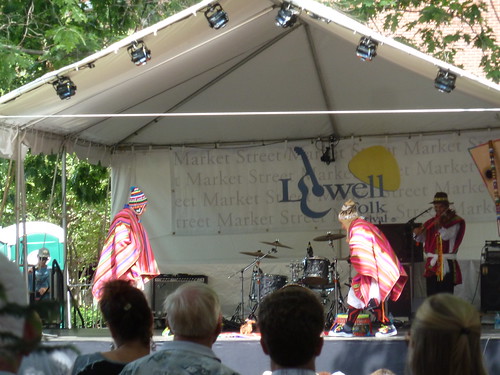 from the 2013 Lowell Folk Festival

The National Folk Festival was founded in 1934 in St. Louis. Since then, it has been run by the National Council for the Traditional Arts. The Festival moves from place to place, typically spending three consecutive years in one location.

That was the case in 1987, when the National Festival came to Lowell. As the three year run came to an end, local organizers, with the assistance of the National Council, agreed to spin off Lowell’s own festival, something that has happened in a number of other communities.

Throughout its existence in Lowell, the Folk Festival has been held on the last weekend in July. It is an iconic and signature event for the city, attracting approximately 150,000 visitors over its three day run. The Festival has evolved somewhat, but someone who attended the first one in 1987 would be quite comfortable with the more recent versions.

From time-to-time in the coming weeks, I plan to produce some blog posts that document the performers who have appeared through the years and how the Festival has evolved over time.  Today is the first installment, covering 1987 to 1989, the three years of the National Folk Festival.

Oppressive heat on Saturday kept the crowd small but beautiful weather and a huge crowd on Sunday left everyone encouraged and anxious for next year’s event. This year, housing for the 250 out-of-town performers was provided by UMass Lowell. Performance stages were at JFK Plaza, Market Mills Park, Market Mills Courtyard, and Lucy Larcom Park. (In case of rain, performances would switch to Lowell Memorial Auditorium, the Smith Baker Center, and the Lowell High Auditorium). The evening performances on Friday and Saturday nights were at the North Common. Craft demonstrations were held at Middle and Shattuck Streets. Parking was free in all city garages. The Lowell Regatta Festival Committee, which had been organizing festivals in Lowell since 1974, Lowell National Historical Park, and the city of Lowell government, all played a major role in the city being selected to host this event.

Here are the performers at the 1987 National Folk Festival in Lowell:

For this, the second year of the National Folk Festival in Lowell, the evening performances were moved to South Common while performance venues for daytime events were Market Mills Courtyard, Lucy Larcom Park, JFK Plaza, Eastern Canal Park (today’s Kerouac Park?), and Market Street Park. Free parking was offered in all city garages. Crafts demonstrations remained on Shattuck and Middle Streets. New this year, the Lowell Hilton offered a special Folk Festival rate of $49 per night, which was 65% off the regular room rate.

A midday rainstorm on Friday did not ease the warm temperatures, so it was steamy when a two block-long procession left JFK Plaza, led by the Panorama Steel Band atop a flatbed truck and headed for the South Common. The steamy weather continued through Saturday but the rain that threatened the area on Sunday held off with the temperature more comfortable.

Here are the performers for the 1988 Folk Festival:

The third and final year of the National Folk Festival in Lowell kicked off with the traditional Friday night parade from JFK Plaza to the South Common, led by Doc Paulin’s Dixieland Jazz Band. Saturday’s weather was “near perfect” while a midafternoon rainstorm on Sunday caused festival goers to seek temporary shelter but when the storm passed 25 minutes later, everyone emerged from cover and the Festival resumed. As in prior years, the performance venues in 1989 were JFK Plaza; Lucy Larcom Park; Market Street Stage; Market Street Courtyard; and South Common with craft displays on Shattuck and Middle Streets.

An editorial in the Tuesday, August 1, 1989, Lowell Sun proclaimed, “The bad news is that the 51st National Folk Festival – and Lowell’s last national festival – did in fact come to a close early Sunday evening. The good news – make that great news – is that the wheels are already in motion to bring a folk festival of the same nature and scope back to Lowell for next year, and for years to come. Although the tentatively named Lowell Folk Festival will not be the ‘official’ National Folk festival, the National Council for the Traditional Arts has already pledged its support to the Lowell Festival. . .”

Those already organizing the 1990 Lowell Folk Festival predicted they would have to raise about $150,000 to make the event happen.

The performers in 1989 included: