For the month of July, Trasna has been highlighting some of the literary and artistic events cancelled because of the COVID-19 pandemic. This week, in the spirit of the Lowell Folk Festival, we present The Wood of O, singer-songwriters Breege Phelan and Will McLellan. Based in South Tipperary, for the last two years, The Wood of O has been playing to sold-out shows in the South East region of Ireland. In January, 2020, they were nominated as a highlight of the Shannonside Winter Music Festival in Co. Clare, their last series of live gigs before the pandemic hit the world. While America’s largest free folk festival won’t fill the streets of downtown Lowell this week, The Wood of O keeps the tradition of new and brilliant music alive this weekend. 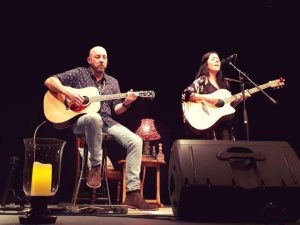 Here, The Wood of O performs three songs, telling us a bit about each, about the process of songwriting, and the origins of their name.

Their first song, The Only Way, was inspired by the challenging times in today’s world. “This song attempts to convey a message of hope, to inspire faith in our inner voice, and to allow the positive influences in our lives to guide us,” they explain.

The second, Gráinne is inspired by a sixteenth century historical Irish figure; Gráinne Ní Mháille or Gráinne Mhaol. She was known as “the Pirate Queen of Connaught,” and as Breege explains, “she broke all the norms of female behavior by fiercely leading battle fleets and being a clever and powerful political negotiator.” Breege was inspired to write this ballad after her search for songs about Gráinne led her to realize that this woman had largely been ignored in the Irish historical canon.

In the last, Meadow Song, the composer, Will, is in love with the idea of a woman who hasn’t yet shown herself to him and exists only in his imagination. He explains: “she wanders through the beauty of the Irish countryside and the lyricist knows that his heart will not be at peace until he can be with her.” The “Meadow Song” is their first single, and has been released on Spotify, iTunes, and Youtube just this past May. It is a stunning piece of music.

For The Wood of O, song writing is something that cannot be forced. “Sometimes, lyrics are born in poetic form, followed by the weaving of a melody around the meter of the verse. Other times–and these are rare and precious–the melody and words come forth together, ready-made.” Both Breege and Will write poetry but have only recently shared these pieces with their artistic community, feeling that their words are naked without the cloak of melody: “while a song can be described as a ‘sonic event,’ depending on repetition and a regular rhythm that creates a predictable pattern of verse, chorus, verse, the challenge, perhaps, is to break free of this predictability and to gain the freedom of a poet.” 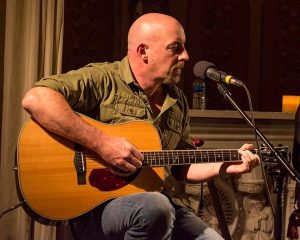 The name, The Wood of O, is inspired by the mystical yew tree and other Gaelic place names in Ireland connected to it. One of these is Youghal in Co. Cork, which in Gaelic is called ‘Eochaill’, from its old Gaelic name ‘Coill an Eo’, meaning The Wood of the Yew; ‘coill’ means wood or forest and ‘eo’ means yew tree. This gnarly looking tree has great importance in Ireland: the Yew, Ireland’s largest native evergreen, can live for millennia. The Reenadinna Yew Wood on the Muckross Peninsula in Co. Kerry, for example, is estimated to be around 3000 years old.

“The significance of the Yew tree to Irish mythology extends beyond mere longevity. The ability of Yew trees to grow their branches downward into the earth to form new trees, which often twist together surrounding the original trunk, makes them seem immortal.  As old branches die, new life can form within them, symbolising death and  rebirth–and the power of the Otherworld. This sense of Immortality appealed both to the Celtic warriors, who chose yew timber for their shields and, more importantly, to the Druids who used the wood of this mystical tree for their sacred wands of divination. The Yew is also one of twenty letters of Ogham, the ancient Irish tree alphabet (300-400AD),  which was inscribed on pillars of stone that served as grave stones or boundary markers.” 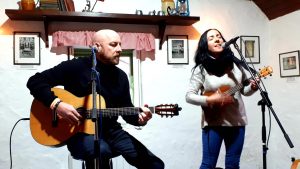 These magical, mythical, and linguistic associations led Breege and Will to choose their musical name.  Many of their compositions have a connection to their ancestral past. For example, Meadow Song, takes inspiration from the Irish Aisling style poems and songs of the late seventeenth century. “Oh my love she is a whisper in the air from sea to glen/ she has stirred leaves that have shaken/ as the thrush calling his love sings out her name.” In these dream poems, Ireland appears to the poet personified as a young, beautiful woman or sometimes as an old crone. Later, into the eighteenth century, these poems took on a strong political ethos, expressing a longing for Irish freedom: “Can you hear her through the valley,/filling meadows with her song?/ ‘Til I feel her arms around me/ My love never to another will belong.”

We are delighted to introduce The Wood of O to Trasna and look forward to seeing them at a future Lowell Folk Festival. 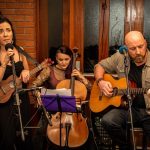 Breege Phelan started singing and playing guitar publicly eight years ago and even though music runs through her veins from both sides of her family, she struggled with severe performance anxiety which, thankfully, she has recently started to overcome. In 2013 Breege sang on Pete MacGowan’s debut EP called ‘Stop the Clocks’ and it was Pete’s belief in her vocal ability that gave her the confidence to battle her nerves and keep singing. Keep singing she did and soon gained a reputation as a vocalist with a passionate and unique sound, her rich tones being compared to Joan Baez. Breege recently directed an all-female showcase, Through Her Eyes, for International Women’s Day 2020 and with Will, has run the hugely popular ‘Caravan of Love Stage’ for The Clancy Festival in Carrick-on-Suir in 2019 and online, in 2020.

Will McLellan is a Limerick-born, Dublin-raised, Tipperary songwriter and composer whose first foray into performance came at seventeen years old when he fronted a band called ‘Shades of Black’ for a charity gig. In the following years, Will spent time perfecting his guitar skills and composing electronic music until in 2014, he met Breege and started down the path to ‘The Wood of O’. Will’s musical influences are wide-ranging and varied, spanning from classical to electronic to Americana and Psychedelic Rock. Lately, he has written some of his best songs and he says that Breege’s voice is the perfect vehicle of expression for the melodies that have been washing around in his head for years.

Breege and Will live together in South Tipperary and are passionate about being involved in the community and encouraging others to find the joy that they have, in music. Before lockdown, they were delighted to perform regularly at festivals and concerts around Ireland and can’t wait to get back to live performances. You can find more of their music on Youtube and Facebook under ‘The Wood of O’. They hope to release their first album ‘Mountain Sky Moon’ in 2021.