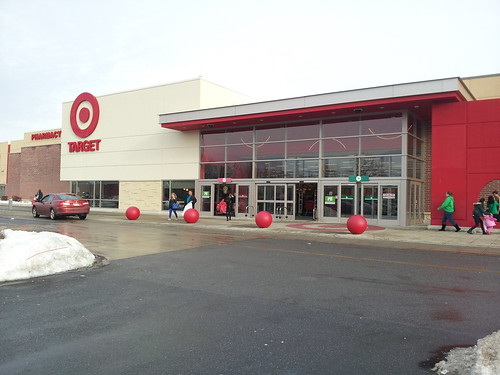 One of the things that has distinguished Lowell from other similar sized cities in post Industrial America is its willingness to keep moving forward. Some efforts work well, others don’t. But the critical thing is to keep trying. Today, we dipped back in the archives and found four such stories, two about businesses that are still thriving (Target and Connector Café) and two that didn’t make it (Café Aiello and Revolving Museum).

This morning’s Lowell Sun reports in a front page story that retail giant Target will open a store in Lowell on Plain Street at the site of the former Hannaford supermarket. The store should open in 2009. Rumor has it that this will be a “Super Target Store” meaning it will include a full line of groceries as well as Target’s regular merchandise. This is fantastic news for the city. Target is a prime “target” for any community’s economy and having one come to Lowell will provide benefits beyond the tangible (jobs, property tax revenue). It will also boost the city’s image amongst the national business community and should make other entities of like stature give Lowell a closer look.

I enjoy finding new places in Lowell, and this morning’s discovery was the Connector Cafe & Grill at 724 Chelmsford Street, a clean, well-lighted restaurant in a small business plaza close to Lowe’s in the Highlands.

I was with two friends, who ordered eggs, home fries, and toast, which were first-rate at the table. Besides the regular menu of breakfast, lunch, and dinner selections, there is a Paleo Menu that emphasizes meats, vegetables, fruits, nuts, seeds, and olive oil and excludes processed foods, grains, dairy, legumes, refined sugars, and processed oils. I hadn’t seen this before, so I ordered the “Fran,” a vegetable omelet plus sweet potato hash and sliced cold tomatoes. Everything was fresh and tasty. I would order this again.

Inside, the atmosphere is bright and comfortable with seating for about 25 people. The chef and wait staff are friendly and eager to help. Breakfast is served all day. The sandwich and dinner offerings are plentiful, from wraps and subs to Caesar salad with grilled wild salmon, spaghetti, Buffalo wings, and pork tenderloin tips. The catering menu includes sandwich platters and a range of Italian and Greek foods—chicken parmesan to pastichio and spinach pie.

The loss of Café Aiello is indeed unfortunate. They made a great cup of coffee and it was a comfortable, convenient place to meet, especially for those of us who work on the south side of downtown (and in proximity to the Hamilton Canal District). Urban theorists, sociologists and others have long identified the importance of the “third place” in society. The first place is your home, the second place is where you work and the third place is somewhere else, an informal meeting place where you can exchange ideas with others. For centuries, perhaps, local coffee shops and pubs served this purpose. Today, it’s Starbucks and places like Brew’d Awakening and Café Aiello that fulfill that role. Third places are especially critical in post-industrial communities like Lowell where promoting the creative economy is critical to future economic well being. But creative types like artists, computer programmers and inventors usually toil in solitude, making places to socialize and interact with others critically important.  While Aiello served a good product and provided a nice space, it undoubtedly faced some steep challenges not the least of which was a Dunkin Donuts right across the street. But the entire Hamilton Canal faces like challenges and the ability for places like Aiello to stay in business during the formative stages of this product will be a big measure of whether this development is a success.

In a few days the Mass. Cultural Council leaders and others will be in Lowell for an announcement about an official cultural district in the city. From the Revolving Museum to Western Avenue Studios, Lowell has leaped forward as a visual arts hotspot since 2002. Recently, someone told me there are about 500 self-identified artists in the city, either living here or working in studios. Hundreds of young people were empowered in their expressiveness by the TRM staff, principally Diana Coluntino, who was the institutional thread during the Lowell years. George Duncan of the Enterprise Bank turned a downtown fence into an evolving easel on Merrimack Street by trusting the creative impulses of TRM. Kudos, too, are in order for the Theodore Edson Parker Foundation directors who invested in the vision with grants that made things go for a while. We had the “big head” for a long time in the garden on Middle Street, a provocative and sometimes daffy counterpart to the silhouetted big head of Francis Cabot Lowell at Boarding House Park. We had the tape monster on Shattuck Street during the Lowell Folk Festival during the mid-2000s. We had Artbotics with scientists and artists from UMass Lowell working with kids to design robots. The National Science Foundation thought this was cool. We had Renovation Journal camped out in the cellar of TRM annex on Market St. In the end, was it the right fit for Lowell? Think of the effort as part of the city’s research-and-development on its way to redefining itself for the 21st century. How many rockets came back to Earth before we landed two men on the moon? Some of these early rockets didn’t make it off the launching pad. The Revolving Museum at least got into orbit here for a while.

One Response to From the Archives: Comings and Goings