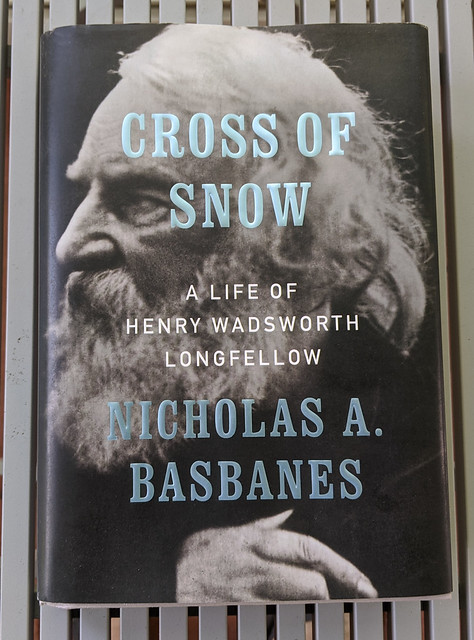 For many years my relationship with poetry might best be described as admiration from a distance so I would not normally pick up the biography of a poet. But the city of Lowell is a constant tug on my attention which is why I recently purchased and read “Cross of Snow: A Life of Henry Wadsworth Longfellow” by Nicholas Basbanes.

This book’s connections to Lowell are many, starting with the author who is a city native and Lowell High graduate (Class of 1961 – someone let the Distinguished Alumni selection committee know that, please). And Longfellow, who was born in Portland, Maine, and educated at Bowdoin College, married in 1843 Frances “Fanny” Appleton, the daughter of Nathan Appleton, one of the founders of Lowell. Since the book is as much a biography of Fanny and her family as it is of Longfellow, there are many references to the city and its mills.

In the book, Basbanes seeks to restore Longfellow to his rightful place in the pantheon of American literary figures, arguing that a cohort of academics in the early 20th century widely disparaged the memory of Longfellow (1807-1882) and his works, deeming them simplistic and naïve. Basbanes argues that a type of group-think captivated the academy and ostracized anyone who sought to present Longfellow in a more positive light (who knew that “cancel culture” was a thing one hundred years ago?)

Although the book recounts the composition and circumstances of Longfellow’s many poems, it does not engage in a deep analysis of them. Rather, it presents a detailed account of Longfellow’s life which Basbanes contends made the poet a model of and maybe the first modern multicultural intellectual. Longfellow’s initial job out of college was as the first-ever “Professor of Modern Language” at his alma mater. To prepare, he went to Europe for several years after graduation to learn the languages he would teach. Until then, Latin and Greek were everything in American higher education. While abroad, Longfellow mastered seven languages (French, Spanish, German, Italian, Flemish, Danish and Swedish). Early on, Longfellow was just as well-known for his translations of European works as he was for his own poetry. As much as anyone in 19th century America, he brought European literature and thought to his countrymen in their own language.

Longfellow eventually moved on to Harvard to serve as professor of Modern Languages but he soon left teaching to concentrate on writing and publishing. Throughout his life, he returned again and again to Europe where he had a wide circle of famous acquaintances, most of whom were just as anxious to meet Longfellow as he was to encounter them.

One reason everyone wanted to meet Longfellow was that he was perhaps the best-known and most widely-read author (not just poet) of his day. A telling anecdote comes late in the book when Basbanes recounts Longfellow’s audience with Queen Victoria at Buckingham Palace. After Longfellow departed, the Queen wrote a letter containing the following passage:

“The American poet Longfellow has been here. I noticed an unusual interest among the attendants and servants. I could scarcely credit that they so generally understood who he was. When he took leave, they concealed themselves in places from which they could get a good look at him as he passed. I have since inquired among them, and am surprised and pleased to find that many of his poems are familiar to them. No other distinguished person has come here that has excited so peculiar an interest. Such poets wear a crown that is imperishable.”

While I don’t normally read the biographies of poets, I enjoy the lives of writers. Maybe that’s because writers write, not just books but also letters, journals and much else. Consequently, they leave behind a rich record of not only their lives but also of the places in which they lived, permitting biographers to vividly create a snapshot of an earlier time.

Last summer in Merrimack Valley Magazine, my colleague Paul Marion argued that “our river valley is extraordinary, if not unique, among national locations with significant clusters of authors.” I concur. That’s one of the reasons we have pivoted the focus of this website to local authors, past and present. Happily Nicholas Basbanes and, if we stretch the “valley” to Cambridge and Concord, Longfellow are among them.

2 Responses to Review of ‘Cross of Snow’