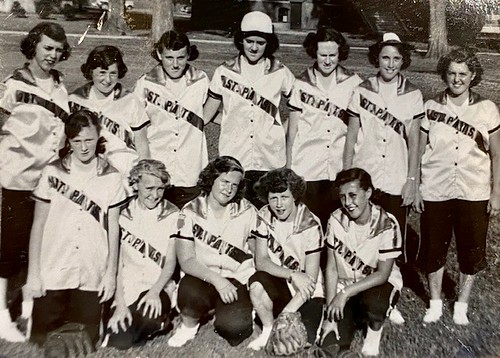 The Art of Getting Home: Bart Giamatti and the 1952 Saint Patrick’s Girls Softball Team

No one has ever written about the game of baseball with more intelligence and beauty than former Baseball Commissioner Bart Giamatti. In one of his many essays on the subject he described the narrative of baseball as “the story of going home after having left home.” My mother, Martha, has always loved baseball. Maybe, part of the reason is that the narrative Giamatti describes – that journey around the bases as ancient as the Odyssey and as new as America – appealed to her. Perhaps it was reflective of the story of her own family, and that of her many neighbors, all of whom left their homes to cross an ocean and find a new home here, in Lowell, Massachusetts.

Her best friend growing up was Athena Letsou, her parents came from Greece. Across the street was a Jewish man, Morris Malenski, and next to him, Stanley Koweski, an immigrant from Poland. This depth of ethnic diversity was reflected in my mother’s home as well. One side of the family were Russian Jewish immigrants, the other side emigrated from Ireland. If Lowell was at one time a melting pot, its ingredients were mainly from this neighborhood, the Acre. It was a densely populated area of three-decker homes, backyard gardens, coffee shops and corner stores. In the Acre, residents walked everywhere, women swept even the sidewalks, and in the streets, kids played baseball; which brings me back to my mother. 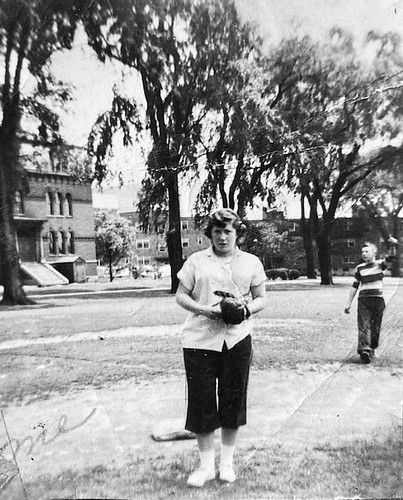 She was called Annie back then, and grew up playing pickup games of baseball. As she recalls, she was the only “girl” who played, but she could hit, run, yell, and chew gum with the best of them. With a hand-me-down glove from Billy Letsou, (Athena’s older brother) Annie caught line-drives, grounders and pop flies. In that space between the granite curbing, she learned the game of baseball and likely something of herself. After all, as Giamatti says: “Home is where self-definition starts.”

At night, with her father Dan, they’d play cards and listen to the Boston Braves over the transistor radio. In 1935, the year she was born, the Braves acquired Babe Ruth. But not even the Bambino could save the Braves, as they recorded the second worst record ever in baseball that season. For a time, their third baseman was from Lowell, Skippy Roberge. The Manager, a Southerner, didn’t care for Skippy: “I don’t like you Yankee-Catholics,” he reportedly said before shipping him out. It wasn’t until 1948, that the Braves turned things around, winning their first National League Championship. But something even bigger happened to the Braves that year. Sam Jethroe joined the team and became the first black player to break the color barrier on the Braves. A reminder that “the tale of leaving and seeking home is told in as many ways as one can imagine.” Yes, Giamatti said that too. 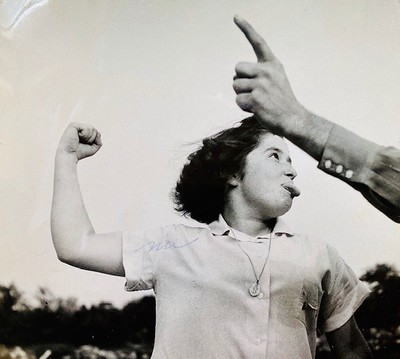 In addition to listening to baseball, she occasionally took in some local games with her father, Dan. Together they would walk down Broadway and Fletcher Streets to the South Common. On the way to the game, they’d stop at the corner store, picking up a couple of Moxies and a brown paper-bag of Pete’s chips.  In 1905 the city had built a baseball field at one end of the Common. Bowl shaped, the park was blessed with natural bleachers. The Twi-League played there and the games were free. The players were all semi-pro. It must have been a joy to watch these games from the green grass of a hillside in the cool of a summer night. On the way home, Dan and Annie would stop again at the corner store, and buy a 5-cent dill pickle for her mother, Sally. The simplicity and magic of such evenings cannot be replicated in today’s world.

By the spring and summer of 1952 things changed for my mother: she went from spectator to player. Baseball wasn’t an option for her, or any other girl. In 1931, after a girl struck-out Babe Ruth and Lou Gehrig, Judge Kenesaw Mountain Landis, a much earlier Baseball Commissioner than Giamatti, banned women from professional baseball. But, the relatively new game of softball opened a variation of the game to female players. 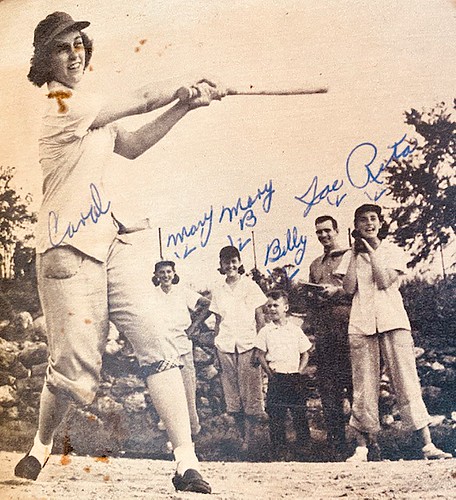 A junior in high school, my mother joined the first-ever, Saint Patrick’s Girls’ Softball team. For Annie and her teammates there were no role models; what they were doing was as new and bright as the red stitching on the ball. The things my mother later taught me – how to catch and throw, and grip a bat – her mother couldn’t have taught her. My mother use to say: “knee down! knee down!” in explaining how to stop a grounder. If only she had met Bill Buckner in his formative years. 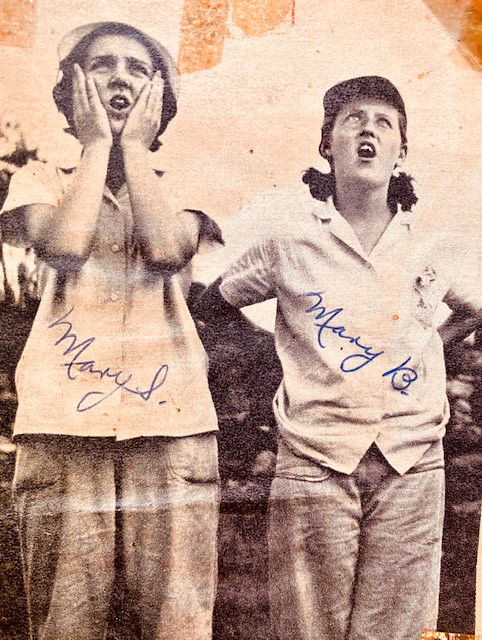 Mary and Mary – Shattuck and Beauregard

Together the Saint Patrick’s Girls’ Softball team ran down pop-flies, threw strikes, hit homers, made double-plays, argued with umps, and genuinely cheered for each other. That summer, they met every morning at the North Common and played and practiced till supper. She remembers all her teammates: “Ann Charity was at shortstop; Mary Purtell was our pitcher. There was Betty Davis in center; Rita Davies in left; Doris Levaseur in right; Mary Shattuck was the catcher; Carol Archibald was on first, Joan Davidson on second, and I was on third base.” According to my mother, Ann was their best player. I remember meeting Ann when I was a kid. She was a Notre Dame nun by then. But back in those days, her specialty was home runs. As Giamatti says, it’s at home plate, that “teammates are . . . all true family.” 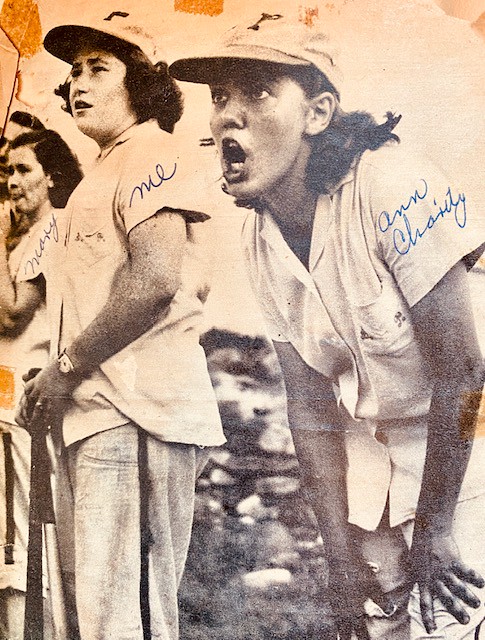 That year they played nearly every Catholic school team between Lowell and Boston; schools in Ayer, Brockton, Medford, Arlington, and Tyngsborough. The success of that season is in the many headlines taped to the yellowed pages of her scrapbook: “Saint Patrick’s swamps ND 22-2,” “St. Patrick’s Tops St. Raphael’s 10-1,” “Betty Davis hits Three-Run Homer,” “St. Patrick’s Girls Win Another;” “St. Patrick’s Girls Still Undefeated.” By the time they reached the playoffs, the Sun described “a large motor caravan” leaving from the rectory to the away game. As it turned out, they were more successful than the Braves of my mother’s childhood. “St Patrick’s Wins Girls’ CYO Crown” reads another headline, this one in big print. 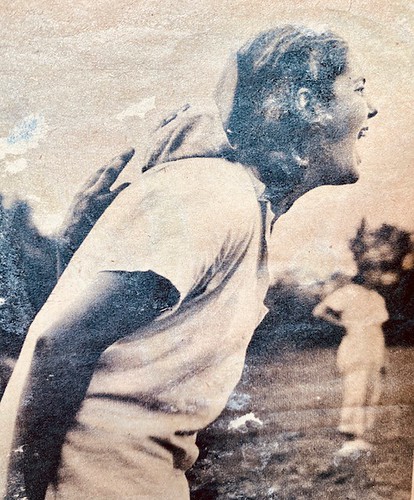 But there was still more ball to play that summer. After defeating nearly everyone, (one game ended in a tie) a special post-season game was organized. Earlier that year, they had played, and won, a non-league game against the WACS (Women Army Corps) of Fort Devens. These players were older, generally bigger and, as required by the Army, were “physically fit.” The game would be at the South Common under lights. As reported in the newspaper, “it was the first softball game played under the lights in [the] city.” It was estimated that some “4,000 to 5,000 people jammed around the playing field” to see the game. One paper claimed it “was one of the largest crowds [they’ve] seen for any event at the South Common.”

Giamatti has described baseball as the “Roman Epic of homecoming America sings to itself.” That night beneath the lights, beneath the open skies of the Common, the memories of past summer nights with her father must have crowded over Annie as she stood at the plate. I thought too of my grandfather as he sat somewhere in the crowd with a cold bottle of Moxie and Sally at his side, watching his Annie reach for the fences. 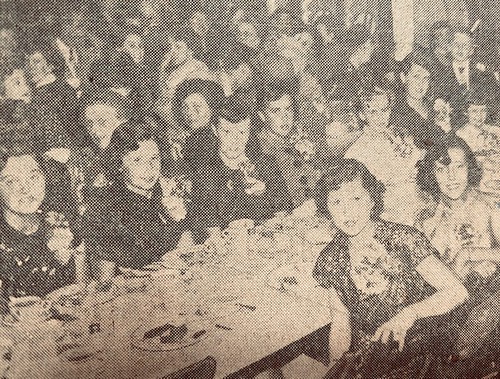 The Banquet, at left, Ann Charity and Annie Regan O’Connor

In honor of their triumphant season the girls were given a banquet. Mayor Geary addressed the gathering and each player received a white team sweater. It was a great night of celebration for the Saint Patrick’s Girls Softball team. My mother says she misses her teammates. The first she said goodbye to was Ann. A non-smoker, Ann was just in her forties when she died of lung cancer. Most, if not all, are gone now.

“Home,” says Giamatti, is “the place where reunion, if it ever were to occur, would happen.” Whether in baseball or in life, home is what we often seek. It’s intended to be a place of safety, and where we can reunite with friends and family. Perhaps on some endless summer night, when moonlight stretches across the field in the Common, faint sounds of a long-ago game will lift into the nighttime sky, and the girls of the Saint Patrick’s Softball team will again gather in celebration at home plate. 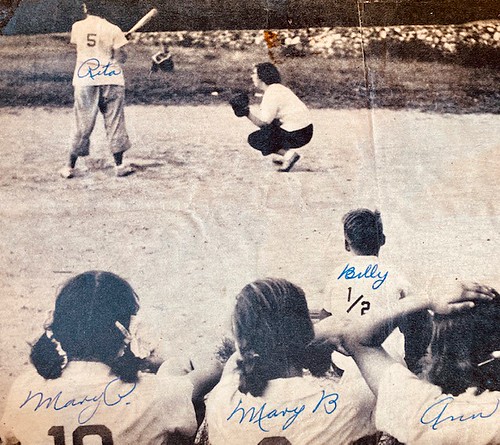 10 Responses to The Art of Getting Home: Bart Giamatti and the 1952 Saint Patrick’s Girls Softball Team