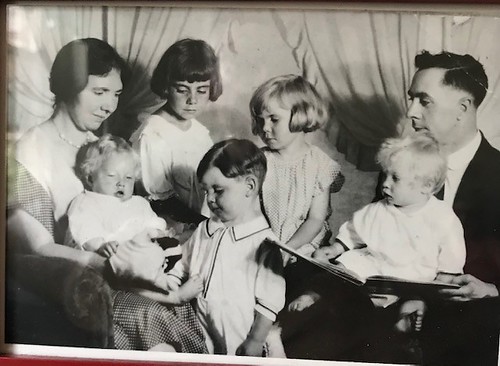 This monologue is dedicated to my parent’s generation.

The set is bare. Actor enters Center stage in blackout. He begins to sing.

“When I think of what we wasted it makes me sad…
we never ‘preciated the things we had…
now I’m standing in the doorway with water in my shoe,
it  really feels like… feels like Summer’s gone… so long….”

Lights come up to reveal the actor, a man in his 40’s.  He stares at the audience, pauses, and begins to speak.

Uncle Jimmy died.  I know it because my Mom called to give me the news.  I feel terrible about it. (pause)  Uncle Jimmy.  It’s really lousy.  And the worst part is, it’s been so long since I’ve even thought about him, and even longer since I’ve seen or talked to him.  Years.   He was Grandma Lee’s son and now she has lost a part of herself…the part of herself that would follow a toddler around a small, immaculately clean house in depression-era Buffalo, NY…home of a real honest –to-God Irish washerwoman named Annie who survived by her wits and faith and managed to outlive her own flesh and blood.  So Annie wakes up to yet another dawn in her Catholic nursing home, shell of a l02 year old woman, and will never really know or comprehend the death of her own son.  Because, you see, that family was a long time ago, long before cancer, that most dreaded of  “C” words, had it’s say with my uncle.

I guess he had it real bad, and, at the end, the Good Lord showed pity and escorted Jimmy out of this, the best of all possible worlds. Well, now he’s gone…and I haven’t even had a chance to think about it until now…right this moment.  And I’m here to tell you that that really stinks, that it’s truly terrible because, you see, he was MY Uncle Jimmy.  Okay, maybe he was no earth-shattering big deal like a rock star or a head of state, but he was a member of my family and that should count for something, damnit. (pause)  He was really just a guy.  Just one of thousand’s of Uncle Jimmy’s who live a life, try to do everything right; make a home, make love, raise kids, raise hell, fight in wars, pay taxes, work, work and then work a little harder and never ask a soul for anything. No handouts for my Uncle Jimmy… never expected anything he couldn’t get without work…And I’m sorry for us, truly sorry for all of us because all of our dead and dying Uncle Jimmy’s don’t seem to matter to us anymore.

Family picnics…one particular family picnic, Uncle Jack’s beach house on Lake Erie, Fourth of July, 1968.   I try to beat one of my older cousins in a hot dog-eating contest. It’s my punk cousin Paul and there’s no way I’ll let him win, the bastard… I’m sick as hell, but I keep on going, shoving hot dog after hot dog down while I stare at his piggy little face, grinning as he slides one after another down his bottomless gullet… the bile in the back of my throat starts to build and the oppressive heat of this all American afternoon starts to close in on me as the screams of my relatives drowns out everything in my universe.

Badly beaten, I attempt to waddle to the bathroom up at the house.  Of course, I don’t make it, and to the delight and catcalls of my cousins, I sick-up right there on the lawn.  Death has to be better than this, but I feel a hand soothing my back and hear stern words of admonishment from Uncle Jimmy to my tormentors.  As he sits with me in the bathroom, telling me off-color salesman jokes, I proceed to lose half of my intestines, laughing.  He stayed with me the whole time.

But picnics are lost in a whirl of trans-continental families and busy lives that distance themselves from the “hassles” of relatives. A million ways to keep in touch, but with a cell phone stuck to our ears we still really can’t connect.  Was that a flower I just walked by?   Was that the sound of the ocean?  Hard to tell with so many wires jammed in my ears, so many screens for my eyes…and wouldn’t I just kill right now to get a whiff of one of Uncle Gene’s smelly old cigars as he trimmed my hair on a rainy Sunday afternoon in the attic of the old family Victorian?  And did my Mom really turn a cartwheel on our front lawn, and did Uncle Bert really sit with his fly open for an entire day, integrity intact, while brother Bob and I laughed till the mashed potatoes came out of our nose?   How many times did I hear Dad sing “just one more song” at a party while I lay in bed, listening to the grown ups party downstairs, smiling as I fell asleep …and isn’t it sad to realize that my Dad never got to meet my beautiful children? …and will they ever get sick in a hot dog-eating contest against one of their cousins?  I seriously doubt that my whole family will ever share the same room together at the same time.  Chicago and Cleveland are so far away.  And California may as well be at the end of the earth. (pause)

Can’t we see we are wasting valuable time?  Are we all too busy to realize that Uncle Jimmy died?  I can talk on a cell phone or cruise the internet all I want, but I cannot bring back the picnics of yesteryear or the gentle man who helped a sick little boy one blazing hot afternoon….

And excuse me for carrying on so, but I feel pretty lousy about the whole deal.  I promise I’ll feel better tomorrow.  (pause)

Lights begin to fade very slowly as the actor sings

“We were driving in the car with my Mom and Dad,
he was driving the car, us kids were driving him mad.
Dad looked at us, then he looked at his wife
As if to wonder where we’d all come from
Mom said “Dad, you know it last too long,
Before you know it…”