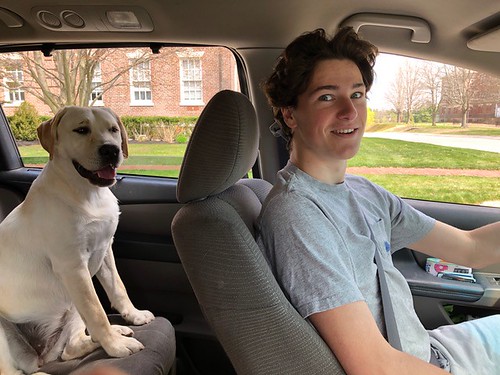 My grandson Jack turned 16 on April 4. He’s a tall, handsome kid with a winning smile and friendly personality.

Like other Massachusetts 16-year-olds, he couldn’t wait for the big day because it meant one thing — he could get his learner’s permit. Then, after taking driver’s ed, he’d make his appointment, take the on-the-road test and proudly have his driver’s license.

That was the plan until COVID-19 struck in mid-March, forcing everyone to stay at home and shutting down every Registry of Motor Vehicle office in the state.

But not to worry. Thanks to an inventive driving school and Zoom, Jack got his driver’s ed classwork out of the way in 10 days of on-line lessons. He aced the test and was ready to hit the road, practicing passing, parallel parking and four-point turns in his mom’s mini-van.

But, alas, the RMV offices were still not open, so Jack couldn’t get the real paper learning permit for a while. But he was eager to drive, and he’d already practiced a bit in the driveway and on some back country roads.

So his mom, Heather, figured “why not” on a sunny Sunday morning in early May. The deserted roadways of Devens, a vast, decommissioned Army base near their home, was the perfect locale for their on-the-road adventure.

“Let’s call Grammy,” Jack said to his mom, buckled in to the driver’s seat and confidently managing the gas pedal and brake as he cruised the empty thoroughfares.

“Oh, my God, Jackie’s driving,” I screamed when the FaceTime image of Jack appeared on the screen of my phone.

“He passed the test, so I decided to let him practice a little,” said Heather.

We talked a bit more, and his grandfather and I smiled at the sight of Jack in control in the driver’s seat.

Then, a few minutes later, our smiles turned to laughter. That happened when Heather texted a photo of Jack in the driver’s seat and there, sitting bolt upright behind him, was Tessa, the family’s beloved yellow lab.

“Jack and his passenger…a little driving practice today,” Heather wrote in her text.

“What a good passenger! No backseat driving!” Jack’s Aunt Wendy texted back.

That was a while ago. But I still can’t stop grinning every time I look at that picture of Jack in the driver’s seat, with Tessa behind him, riding along — the best backseat passenger, indeed!

Nancye Tuttle lives in Wells. A retired journalist, she writes freelance articles for several newspapers and takes classes at South Coast Senior College at York County Community College in Wells. Her grandson, Jack, lives in Massachusetts but enjoys summer living in Maine at his family’s Kennebunkport cottage. Tessa enjoys being anywhere Jack and the rest of her family are.

One Response to Best Back Seat Passenger