Jack McDonough had a long career in academic and corporate communications and the media as a writer and editor. He proudly identifies as an “ink-stained wretch.” Our readers know him as an occasional contributor to this blog and as a past essayist for the Sunrise public-affairs radio program at UMass Lowell. He and his wife Betty spend part of the winter each year in Florida, where he got the material for this essay. 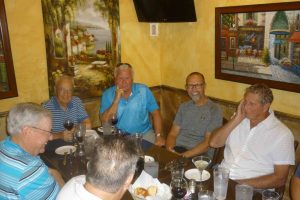 There’s a jug of Carlo Rossi red on the table at one end of the bocce court. That and a bag or two of snack food. And some plastic cups.

Eight guys are playing, four on each end. A few others sit at the table offering helpful observations.

Such as, “Hey, Pauly, I-95.” The implication being that Paul has rolled the ball way too fast – like Interstate speed — and it’s going to hit the back board and accomplish nothing.

Then there’ll be an argument over which ball is closer to the targeted little white pallino ball, the green one or the red one? A valuable point is at stake. A measurement ensues. There’s grudging acceptance. The game goes on. The winners play the next game and the losers sit.

This venue is a five-minute walk from where my wife and I spend a few winter months in Florida. I used to go down to the court to sit on a bench and watch the games. On a couple of occasions I was invited to play.

But this year was different! This year I was actually invited to join the gang. It didn’t hurt that the player who runs everything is an old Navy man like me. Wearing a cap with the name of my ship on it paid off.

No more sitting on one of the spectator benches. Now I was at the table at the end of the court with Carlo Rossi. I had become one of the guys. There are about two dozen in the club and I’m one of only five whose name doesn’t end in a vowel. I’m on the roster with Bruno and Motroni and Vitrano. How great is that?

And I knew I had really become one of them when they started ragging on me.

“Hey, Jack. Nice shot. Did the wind move the ball on you? Use both hands next time.”

Yes! There’s no greater feeling than getting verbally pummeled. You know what the kiss of death is? It sounds like this: “Oh, too bad, Jack. Nice try.” No. You don’t want that. You want sarcasm. You want abuse. You want derision. You want to be one of the guys.

I had the same experience decades earlier. That time it was a softball team. There was no Carlo Rossi on the bench but after most games we’d end up drinking beer at The House of Murphy, the bar that sponsored our team.

My introduction to that group was a little different. A friend told me he was on a team and the games were played not far from my apartment in Boston. So I showed up at practice one day and offered to shag fly balls. They had roster room for another player and I ended up staying with them for several years.

Same sarcasm. Same insults. If you took too many swings during batting practice, you’d hear, “Hey, are your hands bleedin’ yet? Get outta there.”

Guys act like that everywhere. Ball fields, dormitories, barracks. You name it. Getting verbally dumped on is the universal sign of acceptance.

What is it with the male psyche? To be insulted is wonderful. Politesse is not good.

You can find a lot of online sites that deal with insults, including observations such as “friends frequently insult each other in a manner intended to be cordial.” No, no, no. That doesn’t do it. “Cordial” means being genial. Warm hearted. Affable.

If one of your would-be teammates expresses warm-hearted congeniality, you know you’re a goner. Why is that? Beats me. But to quote the renowned philosopher Bill Parcells, “It is what it is.”

Got that? Hey. You listenin’ to me? Wake up.