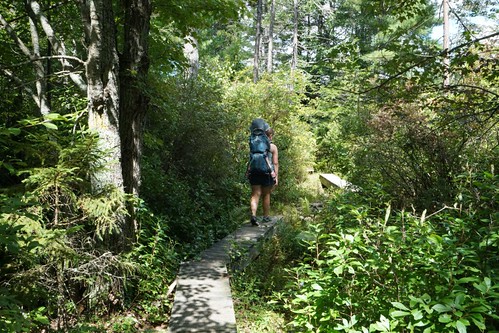 The Wapack Trail, photo courtes of Friends of the Wapack

On June 6, 2020, Emilie-Noelle Provost and Robert Hamilton of Lowell and Suzanne and Thomas Perry of Londonderry, New Hampshire, will hike the entire 21.5 Wapack Trail, which runs north-south from Ashburnham and Ashby, Massachusetts to Greenfield, New Hampshire. The hike, which is being called “Wapack Hike for the Wild,” will raise funds to support the Vermont-based Northeast Wilderness Trust’s effort to preserve a 15-acre parcel of unprotected land abutting the Binney Hill Wilderness, which the Wapack Trail passes through.

The hike will begin at Wapack National Wildlife Refuge in Greenfield, and end at Watatic Mountain State Wildlife Area in Ashburnham. Rain dates for the hike are June 7 and June 13.

One of the oldest interstate hiking trails in the U.S., the Wapack Trail opened in 1923. The trail traverses nine mountains, the largest of which is Pack Monadnock in Peterborough, New Hampshire, at 2,290 feet. The estimated total elevation gain for the 21.5-mile hike is 4,600 feet.

The Wapack Range is unique in that is it home to many plants, animals, and trees that are normally only found much farther north. These include blue spruce, trillium, reindeer lichen, blue bead lilly, moose, black bear, ruffled grouse, and snowshoe hare, as well as alpine bird species such as the boreal chickadee.

“I so appreciate that such a large wild area has been permanently preserved, especially considering that the development of open space and farmland is so rampant in northeastern Massachusetts and southern New Hampshire,” says Provost, 49, a writer, author, and the managing editor of Sensi Magazine Boston. “For me, hiking and spending time in the wilderness has been the best way to relieve the stress and anxiety brought on by the COVID-19 pandemic—something I think a lot of other people have discovered over the past few months.

“One of the reasons we want to do this fundriaser is so that people living in the Merrimack Valley and in southern New Hampshire will always be able to visit this beautiful wild place so close to home. Once land gets into the hands of developers, it’s gone forever,” Provost says. 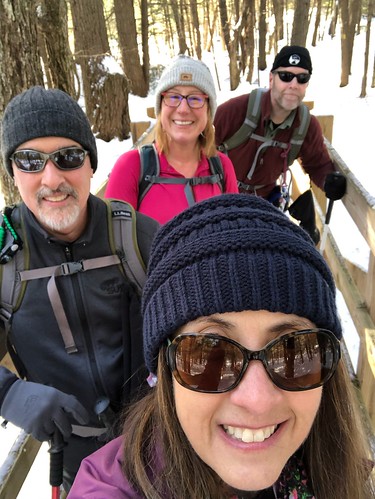 The four friends, who met decades ago at Framingham State University, are avid hikers and between the four of them, have climbed peaks in the White Mountains, Vermont, Maine, the Berkshires, Quebec, Norway, Switzerland, and France. Although they have all sectioned-hiked parts of the Wapack Trail in the past, none of them have hiked the entire 21.5-mile trail from end-to-end.

To date, the longest hike Provost and Hamilton have completed was 17 miles, a nine-hour trek covering three mountain peaks and several trails at Castle in the Clouds Conservation Area in New Hampshire’s Ossipee Range. The Perrys, both 53, have completed several long hikes, including a 31.5-mile loop hike of the Pemigewasset Wilderness in the White Mountains last summer.

“We had been talking about hiking the entire Wapack together for a while,” says Hamilton, 54, a sales executive for a German software company. “I think we decided to do the hike now, as a fundraiser, because current circumstances have made it clear that things we take for granted, things we believe will always be available to us, can suddenly dissapear. It’s about living our lives with intention.”

To make a donation to support the Wapack Hike for the Wild visit https://donorbox.org/wapack-hike-for-the-wild.

Emilie-Noelle Provost is the former editor in chief of 512 Media Inc., the publisher of Merrimack Valley Magazine. She is the author of the middle-grade novel, “The Blue Bottle,” published in 2018 by North Country Press, and continues to write two regular columns for Merrimack Valley Magazine including “Travel Advisory,” which she has authored since 2011, and “Living Madly,” a lifestyle column that has appeared in the magazine since 2017.

Currently, Provost is the managing editor of Sensi Magazine Boston. She writes marketing copy, web copy and press releases for various companies on a freelance basis, and has recently had short stories included the journal Résonance, a publication of the University of Maine, Orono, and in the anthology “Atlantic Currents: Connecting Cork and Lowell,” published in March 2020 by Loom Press. Her second novel, “The River Is Everywhere,” is expected to be released sometime in 2021.

One Response to Wapack Hike for the Wild