This week’s Throwback Thursday takes us back to June 3, 2013, and a visit to Lowell by Grammy Award winning singer/song writer Carole King. Paul Marion wrote the following blog post to document her visit which had her attend a campaign rally for Ed Markey who was then running for U.S. Senate.

Markey, who had been elected to the U.S. House of Representatives in 1976, was running in a special election called to fill the vacancy created when John Kerry resigned from the Senate to become President Obama’s Secretary of State. Markey defeated fellow Congressman Steve Lynch in the Democratic Primary and Republican nominee Gabriel Gomez in the general election. Markey was reelected to a full term in 2014 and seeks reelection this year but is being challenged in the Democratic primary by Congressman Joe Kennedy.

Although Paul’s initial blog post did not have pictures illustrating it, I attended the rally and have some photos from the event which I have added to this version of the post. 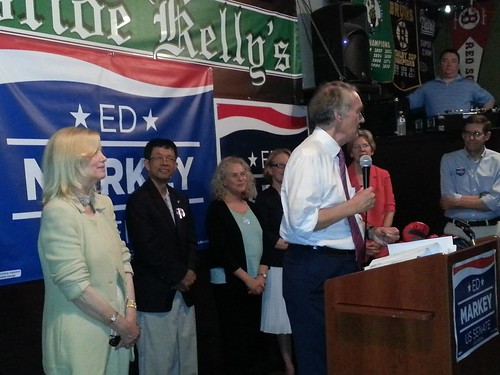 ‘You’ve Got a Friend’

Composer and singer Carole King visited Lowell last weekend to express her support for Congressman Ed Markey in his campaign to win election to the US Senate from Massachusetts. She says she is especially grateful for his support of public policy that addresses the impact of global warming. I was glad to learn that a person who lives in the American West believes she has a responsibility to stand up for a candidate for the Senate from the other side of the country because he will make a difference in the national dialogue about the climate change issue. Senators and all members of Congress are supposed to represent in some fashion all Americans when they get to Washington, D.C., not only the voters in their own districts or states. In some instances lately, we have not seen this mindset in practice. Secretary of State John Kerry while a Senator was sometimes criticized for being more focused on national and world matters than what is happening in Haverhill or Pittsfield. Senators have to navigate in local, national, and international waters. Ed Markey has a record of doing that. Carole King and a lot of other people know what he’s done. 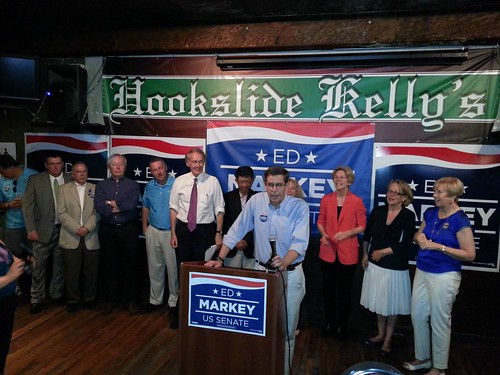 I’ve been impressed by the strong effort on his behalf in the Lowell area. The rally for Markey last Saturday showed that the Democrats do not want to be “Brown’d” in another special election. The ground game, the organizing, the visibility have created energy and movement that should help the candidate at the polls. US Sen. Elizabeth Warren and her boxing gloves sent a message at the rally in Hookslide Kelly’s the other day. Politics is vigorous in Lowell these days. And that’s a good thing. There’s a chain of action from City Council races through national contests. Lowell is a pivotal city.

It’s always encouraging to see a united front with folks like former Sen. Steve Panagiotakos standing with Congresswoman Niki Tsongas. I remember the night in February 2009 when then-state Sen. Panagiotakos, with Representatives Tom Golden, Kevin Murphy, and Dave Nangle, invited more than 100 community leaders to the Owl Diner for the “Breakfast After Dark” event when there was widespread worry about the weak economy and shrinking state budget. That night the many nonprofit organizations whose directors and staff serve the people of Lowell and Greater Lowell every day were recognized for their contributions. Midway through the event, the congresswoman arrived from Washington, D.C., to share the latest news about the federal budget. There was a sense of shared destiny and that it was a time to work together for the benefit of all. It was as if all Lowell was crowded into that diner.