Here’s a new feature for this site: Throwback Thursday. We’ll repost an article from the archives. Our first offering comes from 2007, the first year of this blog’s existence. It was written by Marie Sweeney about the rapidly forming race to succeed Marty Meehan in Congress. 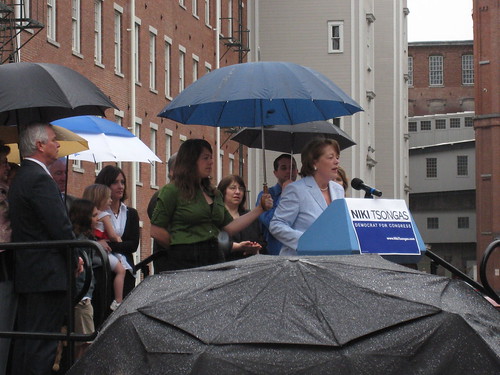 Women in the “Fabulous Fifth”

Scot Lehigh’s column in today’s Boston Globe, focuses on the issue of women in elected positions of power in New England – past and present. Currently women hold two US Senate seats from Maine (Snowe and Collins) the Governorship in Connecticut (Rell) and one of two seats in Congress (Shea-Porter) from New Hampshire. The Democratic Party Chair (might have just stepped down), State Senate President and Speaker of the House in NH are also women.

Connecticut, New Hampshire and Vermont also had women Governors in the 1970’s (Grasso), 80’s (Kunin) and 90’s (Shaheen). Of course, Massachusetts had Jane Swift as acting Governor but she chose not to run in her own right when Mitt Romney appeared on the political scene. With women as Lt. Governor, State Treasurer and now Attorney General and Senate President, as well as three formerly in the US Congress (Rogers, Heckler, Hicks) and Democratic Party Chair – Massachusetts has somewhat of a record with women in office.

All this was a lead-in to a discussion of “a woman in the House” from the 5th District. The fact of Massachusetts having only sent three women to Congress seems to make the MA-05 especially intriguing to Lehigh. Which is why the Democratic race to fill Marty Meehan’s Fifth District seat promises to be such an interesting affair: Not only is the front-runner a woman, but so is the candidate best positioned to challenge her.

As the special election scramble begins, the clear leader is Niki Tsongas, widow of former US Senator and Lowell legend Paul Tsongas, and a recognized community leader in her own right. But Eileen Donoghue, six-term Lowell city councilor and former mayor, also enjoys considerable support in the city that is the heart of the district — and the backing of some of the Fifth’s pivotal power brokers.

While listing prominent supporters of both women, it was clear that Lehigh couldn’t resist taking a poke at the position of the “cagy congressional coyote” – Congressman Marty Meehan and his supposed neutrality in the race. While heavy on the positives for Tsongas, Lehigh does credit Eileen Donoghue with her own strength and support. But though Tsongas supporters are portraying her as the only serious woman candidate, who undersells Donoghue, who is also expected to be strong in Greater Lowell and who has the potential to grow in northern tier communities like Haverhill, Lawrence, and Methuen, places without local favorites in the fight. Donoghue already enjoys the support of important figures such as state Senator Steven Panagiotakos and Mayor Bill Martin, both of Lowell. Mayor Bill Manzi and state Senator Steven Baddour, both of Methuen, are expected to endorse her shortly.

Lehigh gives the men in the Democratic race – Barry Finegold, Jamie Eldridge and Jim Miceli -only a passing glance and little chance while posing that Republican Jim Ogonowki “just might mount a serious challenge.” His conclusion: Still, at least at this point, the Fabulous Fifth seems likely to send a Democratic woman to Congress — and, by doing so, to nudge Massachusetts up into the later decades of the 20th century. With the race ready to become official when Marty signs his letter on May 9th and the Governor ready to declare Tuesday September 4th as Primary Day for this Special Election, look for the race in the “Fabulous Fifth” to ramp-up, speed-up and heat-up in the run-up to the voting on September 4th.

Here are the results of the September 4, 2007, Democratic Primary: