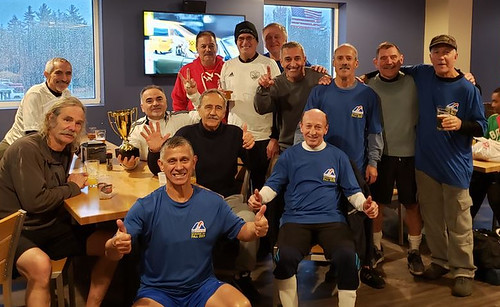 On Sunday morning, August 28th, some three thousand-five hundred soccer players, ranging in age from 30 to 70 kicked off the Fall 2005 season of The New England Over-the-Hill Soccer League. The men make up one hundred and ninety-six soccer teams from Derry and Hollis New Hampshire in the north, Leominster and Shrewsbury in the west, Salem and Ipswich on the sea, down to Marion on the border of Rhode Island. They are divided into age groups of over thirty, over forty, over fifty, and the fledgling over sixty-three. Some in the league are well known: John Smith, the Englishman who once kicked field goals for the Patriots, Francis Okarah, a former pillar of the New England Revolution defense, and, playing for the Natick over forty team in the Spring season, an athletic former B.C. quarterback who once awed the nation with a Hail Mary pass to Phelan.

There are many former professional or semi-professional players in the league. Most find their way to teams in division one or two out of the six or seven divisions in each age group, but there are exceptional players in every division. A team that finishes first in its division moves up; a team that finishes last in its division is relegated. New teams must begin at the bottom. Sometimes a new team, such as Leominster Uruguay, wins its division each spring and fall, and moves up rapidly to division one. Other teams languish in division six or seven for years.

I spoke recently with Alan Leao, who is the manager of the division one over fifty team Carcara, as well as one of its midfielders. A native of Bel Horizonte, Brazil, Alan played on the Junior Club E Athletico for the state of Minas Gerais as a youngster. In 1969, he accepted an offer to come to the United States and play forward for the Boston Astros, where his brother Wagner already played on the left wing. At the age of 56, Alan is still playing with his 59 year-old brother, but soccer has taken its toll on his body.

What drives a former professional player to continue to slug it out in an Over-the-Hill Soccer League two decades after retiring from professional sports? Listen to Alan Leao speak. A slim man with John Lennon sunglasses and a thick moustache, he is recovering from his second ankle surgery. “I was so used to living with that pain, but it feels better right now. I don’t go to any physical therapy. I do my own therapy.” His ankles appear permanently swollen. When asked about his soccer injuries, he sighs and leans back in his chair. “If I tell you about all the injuries I’ve had, you will write a Stephen King novel. I’ve had broken teeth, concussions. I fractured a collarbone playing goalie, knee injuries, broken toes. I broke my arm twice. And of course, my ankles. My ankles are the worst. The doctors have been telling me to stop playing for almost thirty years. ‘Alan, you gotta stop the soccer.’  I say ‘Sure.’  And the next time he tells me the same thing. The last time Doctor Morley saw me he said, ‘Alan, I think the glucosamine is helping your knees, they’re not wobbling as much as before.’ I said, ‘What about my ankles?’  He said, ‘You don’t have any ankles.’

‘One thing I learned from soccer. It’s mind over matter. You remember Gil da Costa who used to play with us on the Pepperell over 40?  He played a game for us with a broken ankle. A couple weeks before, some crazy guy from Wellesly got Gil with a slide tackle. He had a crack in his ankle, but we needed him—you know, it was a playoff game. He didn’t make it through the whole game, but he played. Most guys play with some injury, groin pulls, quad muscles, bad knees, because the body wears down, but you know what never dies? The competition never dies.” He pauses and searches for the right words, “I mean the competitive spirit never dies. And some of those over fifty guys are in tremendous shape. They push themselves harder than ever because they know they’re losing it.”

“How long will I keep playing?  I told my doctor till I’m seventy. I’m doing better now in a way, because when I played with the big clubs in Brazil, they used to have someone wrap your ankles for you. When we came here, we did it ourselves. But eventually, I couldn’t wrap my ankles anymore, because they swell up, and it cut off the circulation, and it was so painful I couldn’t play. So I came up with the idea of duct tape. And that’s gonna add a few years to my playing time, because it works great, except I’ve pulled all the hair off my shins. The guys say, ‘Oh, that looks like it hurts!’ when I take the tape off. I say, ‘You think that hurts, try moving on my ankles.’ And after the game, I pour the water out of my cooler and I put my feet in there with the ice. I tell you, I would dream about putting my feet in that ice bucket.”

“I’ll keep playing because I love the game. I understand the game. I enjoy the game. I even applauded Nigeria when they came back to beat Brazil, because it was a beautiful game. I don’t care who wins or who loses. I want to see a good game. And I keep playing because on the field I forget everything else. I see the game. I see the field, and who are the players, and how they’re organized. And it’s a pure thing. It’s an honest thing. We meet on a field. If you can beat me, good for you. If I beat you…” He shrugs, and smiles. He says goodbye, and hobbles off the field. Veteran of the soccer wars, a captain of championship teams, a playmaker, and a grandfather, held together with duct tape, still leading Carcara forward to the next playoff game, the next championship. And if it sounds corny to you, then you don’t understand. You’ve never felt what Alan has. The game is pure. And age? The old poet laureate said it better than anyone:

Though much is taken, much abides; and though
We are not now that strength which in old days
Moved earth and heaven; that which we are, we are;
One equal temper of heroic hearts,
Made weak by time and fate, but strong in will
To strive, to seek, to find, and not to yield.

That is the meaning of the phenomenon of the Over-the-Hill League. The competitive spirit never dies. And the spirit of men like Alan Leao will not go gently into old age. The game is pure. Good luck, Alan. Long may you play, and we’ll see you ‘round the pitch.

Note: I wrote this in 2005. Alan Leao is currently a manager-player for Nashua Carcara over 63.