Historian Paul Hudon sent us the latest from his Diary in the Time of Coronavirus. This week he invites readers into his room overlooking Pawtucket Falls on the Merrimack River. 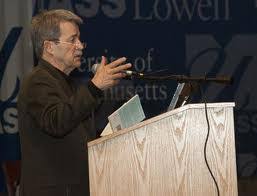 Diary in the Time of Coronavirus

Lord Manor, where I write this, sits on a piece of real-estate that was a different part of my life when it was a different sort of place. In the ‘50s, from ‘52 to ’56, I was a student at St Joseph’s High School for Boys, on Merrimack Street. Every school day during those years I walked from Gershom Avenue, where I lived, to the school, and back again. I figure this means I crossed over the Merrimack on the Moody Street bridge something like 1440 times in those four years. [5X36=180X4=740X2=1440] It was still Moody Street in those years, starting at City Hall and running clear up into Dracut. Later, the piece of it on the north side of the bridge was renamed Textile Avenue, and later still it became University. 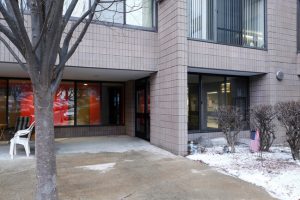 My visits to this place, 321 Pawtucket Street, were off the beaten track in the ‘50s, and certainly occasional. No more than half dozen times, if that. Three-twenty-one was the residence of the Marist Brothers who ran St Joseph’s in some kind of affiliation with St Jean Baptiste parish, and an arm’s-length relation with St Joseph’s High School for Girls.

Unlike Lord Manor, the brother’s house was situated by the sidewalk on Pawtucket, in-line with the other buildings on the street. Where now there’s Archambault Funeral Home’s parking lot. It was a fair to middling impressive brick structure, probably built in the 1870s or 80s. Its prime feature was a tower sort of thing that stood out from the facade, forming a vestibule on the ground floor. I never got much further than that on the inside which is why my memories of the place are all about what went on outside. As I remember—keep in mind I’m now in my 82nd year and memory does not improve with age—the lot ran all the way to the Northern Canal, rusticating as it went. There was quite a vegetable garden back there, and I think chickens were kept there, possibly rabbits.

This was the domain of Frère Louis Viateur, a silver-haired gentleman who was probably out of the 1880s himself. A habitant from central casting. He taught French to all four grades at St Joe’s. Mostly he would have us speaking or explain the rules of grammar; but two times a week he’d come in and tell us to take out a sheet of paper. It was time for a dictée. He spoke a hundred words or so from a French short story which we wrote down. He made sure, I think it must have been deliberate, that there were a dozen or more past participles in his dictation. He never collected those papers. We boys switched papers and corrected each other’s work while he spelt it out, sometimes on the blackboard. I still have trouble with past participles.

I was living the ‘50s in the twilight of Lowell’s Québecois moment. Then came the 60s and it all started to come apart. I was away most of the decade, at Georgetown, doing graduate work in French history. In 1968 I was back, my first year teaching at Merrimack College in North Andover, Mass. St Joseph’s High School for Boys closed that year, folded into Lowell Catholic High School. I never noticed.

The warrior’s life has been described as long periods of boredom broken by short, sudden bursts of terror. Lockdown, “home isolation,” feels like that.

Major fall-out in several directions from Dr Trump’s advisory on household disinfectants at last Thursday’s presser. First direction was his own. It looked for a while like he’d decided to give it up, withdraw from his daily confrontations with the WH press corps on the advice of his team. They were having a negative effect on the polls Parscale told him. But character will out. The lights and the cameras and the hostilities, they’re life.sustaining to him, his native environment. So he’s back at it, and of course he denies ever saying that flooding the lungs with a disinfectant would destroy the coronavirus. Likewise, one day to the next, he made the statement and denied the statement about having 5 million daily tests available ‘‘very soon.’’ I keep hearing the voice of Julie Kavner, “They’ll say anything when they’re courting.” (Sleepless in Seattle ?) Fenton thinks Trump is totally innocent of contradictions. “He thinks in seven second intervals, like anything feral. How can he know?”

Best one-liner came out of the mouth of Nasty Nancy, the Speaker. “They call that embalming.”

Most astute observation came from nailbender at Daily Kos (https://www.dailykos.com/stories/2020/4/24/1940203/-Hold-On-Just-Assume-for-a-Minute-that-His-Sarcasm-Excuse-Is-Actually-True?utm_campaign=trending).

This time. Trump did not use denial, he didn’t claim that he’d never made those remarks about injections. Instead he said it was “sarcasm.”  He just wanted to know “what would happen.” nailbender writes that Trump’s cover story, his explanation one day for what he said the day before, is no less heinous than  his ‘‘lethally idiotic’’ clinical propositions.

“Let that sink in,” nailbender writes. “He was just making an incredibly cruel, tasteless and sickening joke—without even a hint that he was trying to be funny—in his comments to a nation that is reeling from death, isolation, insecurity and dislocation, a nation that is seeking solace and reassurance.” Criminal indifference is the charge.

Say he’s not lying this time, if only for the novelty of it. “How is that even slightly less sick than the homicidal misinformation that he actually intended to say, and did indeed say, yesterday?” Thing is, I suspect that half of what Trump says, maybe more than half, he says just for that purpose. Damn the consequences for us individually, and to hell with what it does to our collective fabric. He needs to know how far he can go. He needs to move the finish line one joke at a time.

The data stream has become so dense it’s a challenge having to decide who or what is taking the lead, what the daily headline is, what the chapters titles, and what the title of the book. There is no doubt the virus itself is in charge. Joshua Lederberg said in the last century that only a virus could dictate terms to us humans, and now novel coronavirus has done just that. Then too, H. G. Wells predicted it in The War of the Worlds, in 1897. There’ve been two movie versions of his novel in my lifetime. Aliens from another planet invade the earth, and nothing we throw at them will stop them. But one-celled organisms do. Aliens have no immunity in our biome.

Have we made ourselves alien? Has capital become an invasive life.form for which we behave as vector? Life is the organization of signals. That’s the definition information technology has brought us to. Do we even know that? We don’t realize it, certainly Maybe that’s the title, The species that got ahead of itself. And died there.

I’m struggling for visual recall of the looks Angela Merkel would give our president when now and then they got into the same frame and we got to see them together in the dailies. That interests me just now because I’ve seen the stats on how the Federal Republic of Germany made out in its handling of the novel coronavirus. That’s the state Germans live under, and note that it’s federal.

The awful truth (but not for the Germans):

I’m not quoting our stats because it’s too depressing just thinking about them, and because they’re available online any number of places.

There’s no point getting into a rant about our situation. But we need to be sure that the point is made clear: This didn’t happen to us, it was made to happen. That it was made to happen when Trump delayed a positive reaction by his administration to the threat of a pandemic because he was convinced in his own mind that the virus was part of the Democratic Party’s vendetta, a continuation of impeachment by other means. It was about him. And, too bad for us, it was part of the plan of the gods, apparently, that his pathology fell in line with that virulent contempt most Americans have for the role of the state in all this. Quite a few are gathering in defiance of ‘sanitary ordinances.’ Some of them are armed.

Check-out “Education and Career” in Wikipedia’s entry for Angela Merkel.

*1st May
When good people make for bad citizens.
No reason to doubt there were ‘very good people’ in among the armed cohort at Lansing yesterday. Strictly speaking Trump had that right, as he did in August ’17 and the ‘Unite the Right’ in Charlottesville. Problem is Americans don’t put any space  between private and public. They’re idiots. The origin of ‘idiot’ survives in ‘idiosyncratic,’ and ‘idiopathic.’  It means ‘personal,’ ‘private,’ and by extension ‘f.off.’ Not what’s needed  in a time of collective threat.
*2nd May
The German case comes up again with this piece, “Even German Conservatives, Corporations make Green New Deal, Climate ‘Top Priority’ after Pandemic (https://www.juancole.com/2020/04/conservatives-corporations-priority.html). What it says it that public policy in Germany is defined by a view to Germany’s survival. Here in the States, policy is directed by a claque of grifters bent on sucking up as many dollars as can be had  (https://www.dailykos.com/stories/2020/4/18/1938376/-A-Kleptocratic-Feeding-Frenzy?utm_campaign=recent#). Here in the States we’re on our own.