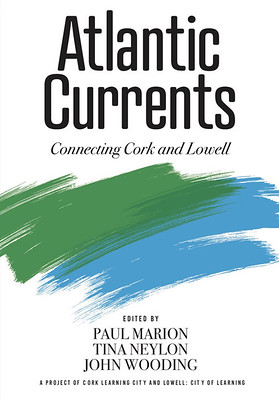 A Smorgasbord of Heart and Mind

Atlantic Currents is a celebration in print of two cities, Cork, Ireland, and Lowell, Massachusetts. Cork has been designated as a City of Learning by UNESCO and Lowell has applied for membership with coaching from colleagues in Cork. But that honor is not all they have in common. It is the shared aims of communal enrichment that the book pays homage to. It applauds the energy that makes these cities worthy of honor.

UNESCO defines learning much more broadly than simply academics, though both Cork and Lowell have their universities and other educational institutions. David Daniel partly describes that broader learning in a short essay in the book. As a teacher in a charter school that has no gym, he takes students for walks and runs year-round all over Lowell. Of the city he writes:

That’s a small sample of city learning, though it doesn’t include the theaters, art galleries, book clubs, music and dance events, ethnic celebrations, sports events, festivals, cross-cultural presentations, or even the exchange of pleasantries between two people born a continent apart, each getting to know the other and to feel a little more familiar with what might have seemed a strange or even threatening culture.

The stories in Atlantic Currents reveal the basic humanity across many worlds, age ranges, and economic strata. There are stories of the aftermath of the Vietnam War and of the Khmer Rouge genocide, of a man coming to terms with a murder he’s committed, of the suicide of a wealthy and successful young beauty, stories that grab your attention in the first sentence and have you still absorbed after the final one. And there are poems with the same intensity: poems that make you smile in recognition; a poem honoring the Indian past of Lowell; a poem that explores the meaningless cycle of birth, mundane existence and death; a poem that honors a housepainter father; a poem on gentrification; a poem about a mother explaining to a six-year old how he got inside her belly. And so much more!

Both cities have their festivals, which showcase parts of their culture. Among its thirty annual festivals, Cork has organized a two-day event called Cork Lifelong Learning Festival, which has as its motto: “Investigate! Participate! Celebrate!” According to Tina Neylon, the festival events take place “on sportsgrounds, in parks, in workplaces, libraries, theatres, on streets, in family and community centres and gardens.”  The program seeks to be inclusive, involving the disabled and migrants, and explores ways for environmental and economic sustainability.

With nearly seventy writers representing the two cities, Atlantic Currents gives you the flavor of both. The contributors include not only prize-winning poets and fiction writers, but reporters, historians, slam poets, rap artists, songwriters, playwrights, educators, librarians, attorneys, a publisher (Paul Marion), a Register of Deeds (Richard Howe), an ambassador, and story tellers of all ethnic and class distinctions. A smorgasbord of UNESCO-style learning!

Heart and mind – it is all here in Atlantic Currents: Connecting Cork and Lowell. 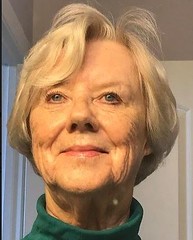 Jacquelyn Malone is the author of All Waters Run to Lethe and her poems have in many literary journals, including Poetry Magazine, Ploughshares, Cimarron Review, and Poetry Northwest. She has an MFA from Warren Wilson College and received a National Endowment for the Arts Fellowship Grant in poetry. She was instrumental in producing the Massachusetts Poetry Festival in Lowell in 2008 and 2009 and in Salem in April 2011.

Atlantic Currents: Connecting Cork and Lowell is available on the Loom Press website.

One Response to Review of ‘Atlantic Currents: Connecting Cork and Lowell’