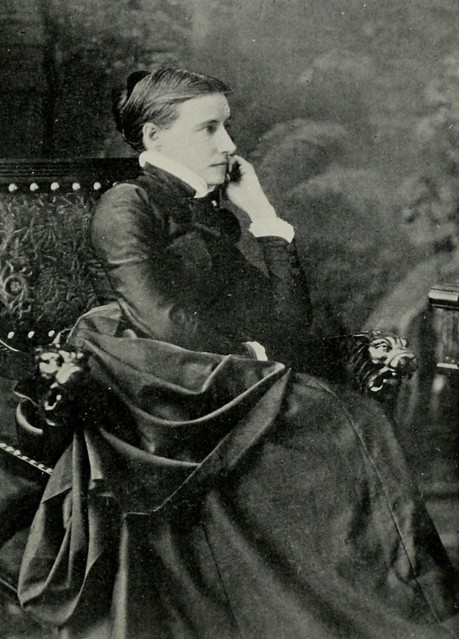 For Andover’s 350th Anniversary in 1996, Julie Mofford wrote a one-woman show based on Elizabeth Stuart Phelps’ Civil War short stories and her autobiography “Chapters From A Life,” with Julie’s daughter, Lauren, portraying the author. Julie also scripted “The Tenth of January,” a play based on Phelps’ story about the Pemberton Mill disaster for Immigrant City Archives in Lawrence.

A Feminist Author Ahead Of Her Time

Elizabeth Stuart Phelps(Ward) (1844-1911) is another outstanding Merrimack Valley writer to read and remember. Author of 57 works of fiction, poetry, and more than 200 short stories and essays, she was America’s best-selling author after the Civil War, second only to her Andover neighbor, Harriet Beecher Stowe.

Daughter of an Andover Theological Seminary professor, Phelps grew up in a traditional Victorian household where female roles were limited to “piety, purity, and domesticity.”  A women’s fulfillment derived from her husband’s achievements.  Phelps rebelled against the “relentless drudgery of domestic duty,” and the concept that a woman’s place was in the home. At a time when “all women rich or poor, are bound by society’s dependence upon men,” Phelps challenged social and gender norms.

By the age of ten, her stories appeared in youth magazines.  After receiving $25 for “A Sacrifice Consumed,” a Civil War story, Phelps realized she could make her way through life with a pen.

“I am proud to say I have always been a working woman and always had to be. When that first little story appeared in Harper’s, it occurred to me, with a throb of pleasure greater than I supposed life could hold, that I could take care of myself, and from that day to this, I have done so.” (Chapters From A Life, p. 79).

At 19, Phelps began teaching textile workers in tenements in Andover’s Abbot Village. “Hedged In,” her novel based on these experiences, featured ‘mill hands subsisting on bread and molasses, whose work scarcely allowed them to see the sun.’ Some literary historians consider Phelps “an early realist,” and “the first American novelist to deal with urban industrial problems.”

She focused on the lives of female factory workers.  Sip Garth in “The Silent Partner,” worked eleven and a half hours at her loom, then returned home “for washing, ironing, baking, sweeping, dusting, sewing, marketing, pumping, scrubbing, scouring.” Before writing this 1871 novel Phelps consulted the Massachusetts Bureau of Labor Statistics.

From Andover Hill in 1860, Phelps observed the fire that followed the Pemberton Mill Disaster, furious at not being permitted to accompany her brother “of the privileged sex,” to Lawrence.  After interviewing survivors, as well as physicians who treated victims and studying newspaper accounts, this investigative journalist wrote “The Tenth of January,” for Atlantic Magazine.

Phelps’ grief over her fiancé’s death after Antietam, grew into sympathy for “all the bereaved who suffered with me – the helpless women who loved and lost all in war without choice or protest – powerless to participate in the events governing their lives.”  According to Phelps, “The Gates Ajar” was “written to comfort women whose misery crowded the land…” A runaway best seller, it made Phelps financially independent and “the most astonished girl in North America.” (Chapters From A Life, p. 110).  Only ‘Uncle Tom’s Cabin’ sold more copies.

This internationally acclaimed book offered a comforting view of the afterlife, describing heaven as a place where the departed maintained characteristics they had on earth and continued to enjoy what pleased them here.  Professors would find libraries and musicians could still play pianos.  The author was severely criticized by conservative theologians.

Commenting on the book’s phenomenal success, one critic claimed, “Miss Phelps has already made $20,000 from Gates Ajar and at that rate, won’t be likely to shut them!”  She followed with two more books on spiritualism.

Phelps observed that the Civil War “created a world of poor widows and young spinsters without means of support.  Many might have married protectors and providers who never returned home and still wearing tattered blue coats, follow adventure West.”

“Now that slavery and the War of Rebellion have rolled away in fire and smoke, the development of women should be the next great question for America.”  Phelps championed the right of every woman to determine her own destiny and earn her own living.  She encouraged women to seek vocational fulfillment independent of men. Her strong female characters provided role models for readers and achieve success in professions traditionally unavailable to Victorian women though they frequently face tough choices between marriage and career.

Should “Doctor Zay” choose matrimony or medicine? This 1882 novel is considered the earliest American novel featuring a successful female doctor.  “The Story of Avis”(1877) describes a woman’s struggle to balance married life and the domesticity society expects of her with artistic talent.

In 1877, Phelps became the first woman to deliver a lecture series at Boston University. John Greenleaf Whittier called it “admirable in manner and matter” and said he’d never heard a woman speak with such magnetic power!”

“Burn the bustle!” Phelps campaigned relentlessly for fashion reform, urging women to “climb out of corsets” and get rid of ‘sweeping skirts.’ Her 1869 New England Women’s Club lecture was widely circulated as ‘What to Wear.’

“Why half the human race must concern themselves with looking pretty for the other half is beyond me!  The methods of dress practiced by women are a hindrance to realization of their mental possibilities.  Besides being expensive and uncomfortable, these styles endanger health… making us appear to have camel humps on our backs and market gardens upon our heads!”

A life-long reformer, Phelps also used the power of her pen for the causes of temperance and animal rights, even addressing Massachusetts State Legislature in 1904 on anti-vivisection.  Her work offers insight into 19th century social and cultural history, particularly regarding gender roles.  Phelps urged women’s “search for meaningful work,'” and considered female financial independence essential.  “I believe in women and in their right for the best possibilities in every department of life.”