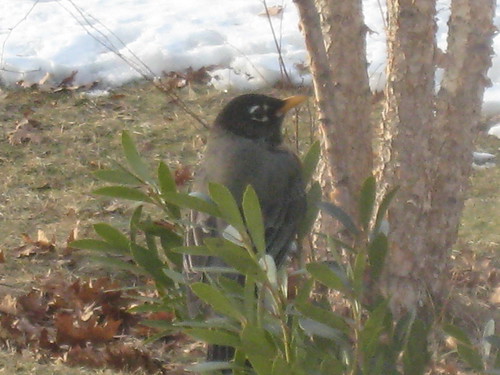 I’ve noticed a pair of robins who occasionally perch on the roof kitty-corner to our living room. So far, I’ve been flattering myself that this is some kind of Disney idyll — that the birds are enamored of my two young girls, and are checking on them. They look ready to burst into a song about sunny mornings and silk ribbons.

Today, the illusion was dispelled when I saw the duo flitting around gathering twigs and dried husks of pokeweed. They were looking for a place to build a nest and weren’t admiring us — they were gauging our threat level.

We’ll find out soon enough what rest they chose for nest and nestlings.

There is a small hiking area in my town where I can go and be alone or nearly so. Rarely do I see anyone there. I make the drive knowing some people would be critical of my decision, and I have my own doubts as to whether it’s the right thing to do. There are those who advocate for not leaving the home and yard for any but the most essential activities. After all, even well-intentioned humans can find an excuse to justify all manners of selfish behavior.

So, I went into the woods with a slight feeling of guilt, wondering if I was merely trespassing on land where I had no business.

As soon as I crossed the bridge from field into wood, I went off the path to increase my chances of not being seen, taking to the shadows like a thief or a hermit.

Eventually, I found two flat rocks remnants of an old quarry—and opened my backpack. Inside was a tripod, two thermoses (one orange and small, one silver and large), and a $15 magenta-colored Morakniv (sadly, I found no Dryad’s saddle enroute—this being my foraging blade). Hanging from my pack by a carabiner was a kuksa—one of those handmade-looking cups traditionally made by the Sami people of Scandinavia, having become trendy of late with bobo campers and redneck woodworkers. A kuksa is a terrible vessel for tea—unless you’re in the woods. There, its functionality shines: durable, dutiful and unobtrusive.

With the tripod, I set up my camera and broadcast a live chat to a handful of friends on Facebook, pouring out steaming leathery shou puerh tea from the thermoses, pausing to admire a trio of turkey vultures who alerted me to their presence with slowly spiraling shadows, and spoke in my rambling way about all sorts of topics: the longevity of Greenland sharks, the documentary “Hotel Coolgardie,” the types and philosophies of Chinese and Japanese tea ceremonies, my own reason for being out among the trees on a quiet Saturday.

It was Easter weekend, and the comments from friends and relatives turned to weighty matters of family, hope and regeneration. Such was the spirit of the day. The conversation ran its natural course, finishing as I poured out the final drops of tea. A few more moments of silence. Say goodbye. Click finish. Pack up.

The music of Townes Van Zandt.

One Response to Isolation Scenes