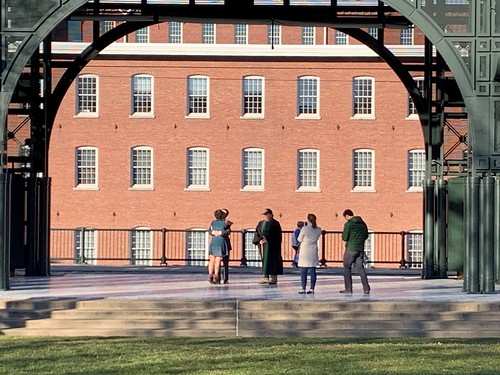 This past Friday was spent respecting social distance. But on a sunny afternoon, at the end of a tense week, I decided that it would be a good thing to take a bike ride along the river. My destination was the Boott Mills and Boarding House Park in Lowell. The park, becoming greener with Spring, is a close by retreat. On the stage at the park, I witnessed a coronavirus wedding.

My own possessions included a backpack with a book and some cool but watered-down iced tea. The wedding party consisted of a presiding justice of the peace, two friends as witnesses, and the smiling young couple, apparently having chosen not to postpone this matrimonial event. The presiding official wore a cassock, a vestment draped around his neck, and carried a cane and also had what appeared to be a Navy commander’s cap.

In this brave new world of hand-washing and avoidance of being too close to others, here was an ultimate human act of being bound together, until death would do them part. Was this to have been a church wedding? A traditional wedding with family, friends, flowers, pomp, music, and dancing? Had the invitations gone out for this very day? Of course, the couple could not have accounted for the virus that had secured so prominent a place on that invitation list.

The groom served as his own ring bearer. Digging into a side pocket and leaving time to spare, he grasped the rings carefully in his hand. Then summoned by the commander, he secured his ring. Then he placed the second ring on the finger of his bride to be. With a few other accidental attendees in the park, I was able to observe all of this, but was too distant to hear the words. My sense is that we all appreciated the scene, largely knew the vows, and did our best to imagine the circumstances. And then, finally, receiving permission – damn social distancing – an enthusiastic kiss. The bride and groom fully embracing each other and the moment. Then a  pivot from the kiss to a lengthy, slightly twirling hug. A light applause came up from the unrelated but appreciative observers. The couple’s witnesses took pictures but avoided hugs and handshakes. Call it a Spring day’s affirmation of life and marriage. A different kind of performance for Boarding House Park. A day to be remembered on this Friday, March 27, 2020.

Afterwards, biking back home, I imagined a day at the same venue years from now.

“Dianna,” says her mom, sitting on a comfortable blanket surrounded by hundreds of concert goers at the park.

“Do you see that stage up ahead?”

“Sure,” says Dianna, distracted and looking at her wafer slim iPhone 14.

“That is where your dad and I were married, ten years ago this month.”

“At a concert?” says Dianna, her parents now capturing some amount of her attention.

“It was different then,” adds her mom. “It was a hard, hard year, 2020. It was a year of something called a pandemic. It spread across the world. It changed a lot of plans. Luckily, we were all safe.”

The musicians appeared on the stage to gathering applause. The music started again.

I am appreciative of Dick Howe, Jr.’s invitation to once again contribute to his blog. My ambition for the column I am calling “Fred Notes” is to take the time granted by adversity to try to place elements of life into perspective. It may be expressed as an observation, an interview, or a story. I hope that you will enjoy and to respond with your own thoughts and comments.