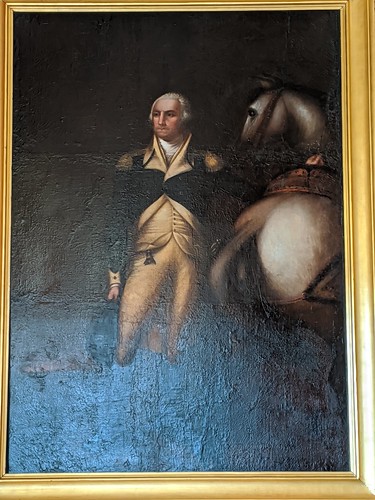 This morning the Trustees of the Pollard Memorial Library hosted a celebration of the restoration of the library’s “Washington at Dorchester Heights” painting. Done by local artist Samuel Howes, the painting is modeled on Gilbert Stuart’s classic painting of the same name.

The restoration was made possible through the generosity of Rosemary Noon and Paul Marion who donated money in honor of her late parents, Mary and Richard Noon. The Pollard Memorial Library Trustees and the Pollard Memorial Library Foundation contributed additional funds to the effort. Art restoration work was completed by Susan Jackson of Harvard Art (the frame); Gianfranco Pocobene Studio (the painting); and Clark Fine Art Services (removal and installation).

This morning’s celebration featured remarks by Lowell Mayor John Leahy and City Manager Eileen Donoghue. Donna Richards, chair of the PML Trustees was the Master of Ceremonies. I was asked to speak about the scene depicted in the painting. Here are the remarks I prepared along with some pictures from the event:

In Paul Revere’s Ride, a wonderful book about the opening hours of the American Revolution, historian David Hackett Fischer cited as evidence of the effectiveness of the colonial communications system that fact that before the British had finished crossing the Charles River on the start of their journey to Lexington and Concord early on the morning of April 19, 1775, word had reached Captain John Trull of the Tewksbury Minutemen who got out of bed and while still in his nightshirt, fired his musket out his bedroom window three times to alert Captain Joseph Varnum and the Minutemen of Dracut of the need to mobilize. To me, that story also illustrates that despite Lowell not being formed for another 50 years, that men who lived here where we live participated in the opening battles of the war that created the United States. 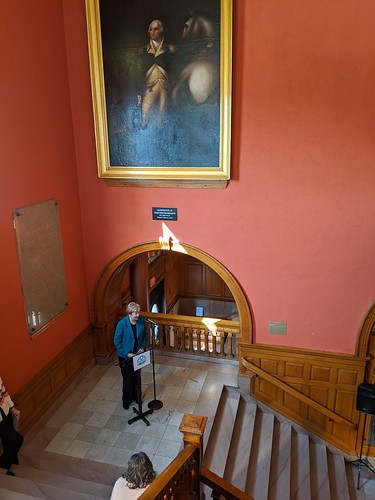 What I would like to do this morning, is to briefly tell the story of how we got from the battle of Lexington and Concord in April 1775 to the scene depicted in this painting which took place ten months and forty miles from here.

Paul Revere’s alert system mobilized citizen soldiers from across New England and soon 15,000 of them surrounded Boston. Much of the Boston we know today did not exist in colonial times. In 1775, Boston was essentially an island, connected to the mainland by a narrow causeway that ran to the southwest. To the north, east and south was Boston Harbor. Across the harbor to the north was Charlestown and some high ground known as Bunker Hill; to the south was Dorchester and some high ground known as Dorchester Heights.

Now one of the fundamental rules of military tactics is to possess the high ground, but neither the colonials nor the British occupied Bunker Hill or Dorchester Heights, at least not at first, mostly because neither felt strong enough to defend these hills from the certain attack that would follow their occupation.

That all changed on June 16, 1775. About 1200 colonial troops quietly occupied Bunker Hill and quickly dug in. When the British awoke on the morning of June 17, they saw colonial entrenchments in a commanding position on Bunker Hill. The British commanders immediately ordered an attack believing that the American rebels would flee in terror in the face of British regular troops. That did not happen. In fact, the Americans from behind their entrenchments, mowed down the British soldiers. The British reformed and attacked again with even more casualties and without success. Finally, a third attack was launched and the Americans ran out of ammunition and retreated. The British suffered more than 1000 casualties; the Americans nearly 500. While the British prevailed, one of their surviving officers said something like, a few more victories like this and we won’t have an army left.

Just three days before this battle took place, the Second Continental Congress, meeting in Philadelphia, appointed George Washington to be commander of the colonial troops around Boston. He arrived there in July 1775 and took command. As the British sat safely in Boston, Washington concentrated on training his troops and organizing his army.

One of the citizen soldiers who greatly impressed Washington was Henry Knox, a young man with no military experience. But Knox liked to read. In fact, he owned a bookstore. And the books he read most often were military textbooks. By 1775, through his reading he had made himself an expert in artillery and fortifications.

As the winter arrived, Knox offered Washington a suggestion. He, Knox, could travel 300 miles to the west to Fort Ticonderoga which had been captured in May. Ticonderoga was at the southern tip of Lake Champlain and had often been called the key to the continent, but the British had only stationed 10 soldiers there to maintain the fort and its 60 cannon. Washington ordered Knox to mount the expedition. 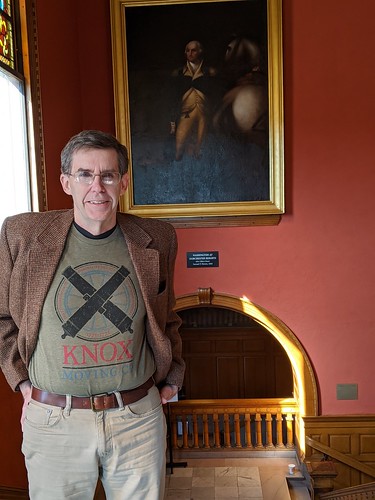 Traveling through the snow and cold, Knox and his men reached Ticonderoga on December 5, 1775. He hired dozens of oxen and had his men construct wooden sleds to transport the cannon back to Boston. Across the Hudson River and over the Berkshires they came on a 300 mile journey in the midst of winter. It took them three months but they arrived outside of Boston at the end of February 1776.

Then, on the evening of March 4, 1776, Washington’s army dragged those cannon up Dorchester Heights and constructed fortified positions around them. When the British awoke, they were stunned to find themselves staring into the barrels of 60 guns on the high ground south of the city. Despite memories of the cost of the Bunker Hill attack, the British prepared to assault Dorchester Heights but before the attack could be launched, a Nor’easter struck and did to the region what it would do to us today – no one could move.

For a group of rebels to force the retreat of the British Army was rightly considered a tremendous feat and the descendants of those rebels honored their achievement by creating a holiday in Suffolk County. This holiday was called Evacuation Day because it’s the day the British evacuated Boston in 1776. Of course, Dorchester Heights eventually became known as South Boston and the newer residents there despite their dislike for all things Yankee, had no problem with having a holiday on March 17. 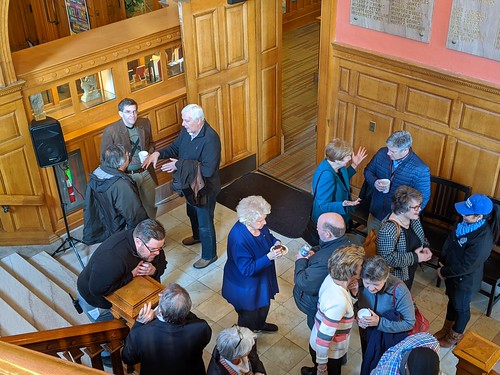 A reception followed the speaking program

And so George Washington was also honored for this great achievement of forcing the British out of Boston and we rightly honor him today with this restored painting. But it is said in the army that a good general understands tactics but a great general understands logistics. The feat of dragging 60 cannon through the Berkshires in the dead of winter was a great feat of logistics. Washington was wise enough to order the mission, but it was Henry Knox who carried it out. So I’d ask you to allow Henry to share in some of his commander’s glory which I think is especially fitting given Knox’s relationship with books and our presence here at the Pollard Memorial Library.