Fred Woods is familiar to many of us who served in the Lowell revival campaign in the Roaring ’80s. He goes back earlier in Lowell as part of Team Tsongas during Paul’s runs for the U.S. House and Senate—and he was there for the presidential push in 1991-92. Although known best as a media producer, he has written poems and published some of them, including one set into a sidewalk in Cambridge, Mass. With his wife, Nancy Bellows Woods, who was on the planning staff at the Preservation Commission in Lowell, Fred travels with the best of ’em. From Seattle, he sent us this new poem set in the Southwest. We look forward to more of his contributions in this space. These are his photographs.– PM 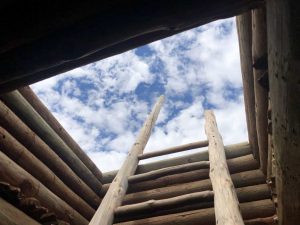 Looking up through the kiva

Not even bright sierras

were enough for Fray

and layer on layer build

higher up to please

nature with a church not big

but biggest and six towers

away from heathen ways

shaped to bricks to build

built a kiva and 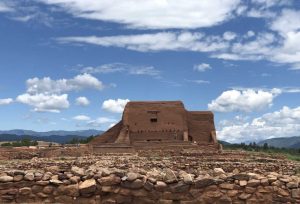 Note: When Spanish settlers and missionaries first came to Northern New Mexico in 1598 they found people living in more than 70 villages, “pueblos,” in and around the Rio Grande Valley. Pecos, or Cicuye, pueblo with more than 2000 inhabitants was one of the largest. Over the years Spanish occupiers grew increasingly oppressive, and 1680 the pueblos revolted, driving the Spanish out of their territory and destroying all the mission churches except one. Freed of the Spanish, the pueblo people again built underground kivas and resumed their traditional religious practices. Conflict among the pueblos paved the way for the Spanish reconquest in 1692.