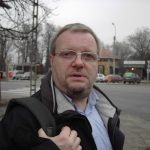 I have a connection to Lowell via your local writer Steve O’Connor. It was my first time in France, my first time grape picking, but another Englishman was doing his third year and he knew how to find the work. That was Steve’s problem. He didn’t know that it was hopeless marching around from grower to grower. They were spread out, the terrain was rough; you had to go to the cooperative where all the growers deposited their grapes at the press and ask around and you’d get hired the same day. We met Steve at a small café in St. Andre and took him along. Next to work, the thing he most longed for was a shower. He worked with us there in the south and tagged along when we moved up to the Beaujolais region, where we found work in the green rolling hills of Antonin Coquard’s extensive vineyards. We all got a cot, and there was a shower. 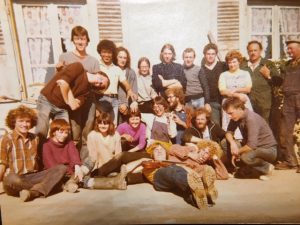 The grape pickers in France, c. 1980 (Malcolm on left leaning, Steve on the ground with fiddle on his chest).

It took a little time for Steve and me to forge the friendship that has lasted, mainly by letter and then by email, for forty years. At some point, Steve said the magic words “Shite and onions!,” and I recognized in this phrase said often by Stephen Dedalus’s father that we were both literary chaps. Steve had just completed his master’s at University College, Dublin. We’d read our share of Beckett, Joyce, Flann O’Brien, O’Casey, J.M.Synge; my order of preference was peculiar; I’d put J.M. Synge above them all.

After les vendanges, or grape harvests, were over, Steve and I got a job stacking firewood at some castle. We left there in the middle of our wood-stacking one day and went to Paris, making a few francs with Steve playing fiddle in the Metro beside his open case.

O’Connor was a good guy, easy-going, calm, just never trust him with tickets for the train; he made sure no one would ever find them, including himself. The first year we met the most lovely pair of southern French women you ever saw. It’ part of the lore of such things that beautiful girls become progressively more capricious over time. With Steve’s girl, the problem was the pull of the Church, or some strange combination of the Church and New Age mysticism; (that’s what he gets for his twelve years of Catholic school); mine simply believed in spontaneous actions–for herself, never for me. And some mysterious guy called Florent kept showing up. In the second year, it started to look like things were repeating themselves a bit too much, so our solution was to “faire le stop” meaning a hitch-hiking tour to Belgium and Holland. That resulted not in wine, women, and song as in France, but beer, old friends, and Old Masters in the Lowlands. It’s great to have had both. In our soiled clothes, we looked like a couple of kids who were strapped for bread, but people were so kind to us. We got free drinks in one bar and they even dry-cleaned Steve’s only jacket for free, though it didn’t look much better when they had finished.

I don’t remember exactly when we parted, but Steve went down to Bourgoin Jallieu; the mystic woman had got him a job in her brother’s gas station. I went on to Hungary, where I’ve mostly lived since then, teaching English and translating speeches, sheet music forewords, cd liner notes and books, mainly on the subject of classical music. Among our voluminous correspondence over the years, Steve and I have shared our writing, and he has asked me to contribute something to richardhowe.com. I’m now, somewhat vicariously, part of the literary history of the place Steve used to refer to as “le centre du monde,” Lowell, Massachusetts.—Malcolm Sharps

Author’s note: Twins and an informally adopted “third twin” fall in love with the same nurse when she treats them in her ward. The real twins have disastrous encounters, however, and it remains for the “third twin”–who even has to fake his illness–to be the one with whom she finds true love. One of the themes of the novel is obsession with television and film and the way it punctuates every occasion in our lives. The nurse and the three twins are determined that even a romantic evening isn’t going to prevent them watching their favorite programs.

“What place is there left for me to go now? Love? You once held out the chance for me to stop hating. Somehow things didn’t work out. Life? You gave me something to live for and then you took everything from me.”

Danny was coming out of his coma, uncertain if he was going into a better world. He was sufficiently aware to speak.

“In the book it was different. The guy makes friends with the mutant clam–it even joins a video library and converts to born-again Christianity–but he still can’t dissuade it from its demonic mission of revenge–he’s left with a terrible dilemma–kill his only friend or allow the clam to destroy Rhode Island.”

“That’s so sad. And after all that effort.”

The nurse’s sympathy was inadequately feigned, but Danny was deaf to any irony not his own.

“Yeah, but then he gets to eat the greatest chowder of his whole life.”

Carol Morgan would have been astounded to learn that she had been following the story for her personal pleasure. She had hated every dire minute, every dull, clichéd, childishly-conceived, woodenly-acted, crassly-written, badly-directed, perversely-edited, mawkishly-pessimistic and optimistically-saccharine by turns minute, but curiosity prompted her to wonder about what had really happened to the clam. Wouldn’t you know, they didn’t exactly make it all that clear what had become of anyone. The camera always looked away from what was most attracting your attention.

“The atomic blast must have destroyed everyone and everything. They were standing in its direct path. That must be the end.”

“They’re already making the next series.”

“But do we know for certain what happened to the clam?”

“The endings are never all that clear. Especially if you haven’t been following every week. You have to watch next time to find out for certain. I hope you weren’t disappointed.”

Staff Nurse Morgan flinched treating the suggestion as close to an insult. Disappointed by such an insignificant matter as a silly television programme? And as for wasting another Thursday to find out more.

Danny became fully alert, impressed by this. He was a collector of mottoes and this one made you think. Expect disappointment. You’ll never be disappointed. Just so.

“That’s quite a motto. Yes, deep. The more you think about it, I might borrow it myself if the IPR isn’t copyright restricted.”

She really was out of things. A complete marginal, Danny concluded, living her life entirely between the Men’s Medical ward and this little room. And what was it it smelt of in here? Such a strange combination of mundane odours. Rotting fruit and instant noodle mix and other less identifiable ones he shouldn’t enquire too deeply into. What was it she got up to here? How often did she have men visitors to her room? Lonely, single women were a mystery. Like inhabitants of another planet. In their isolation they might live by rules completely alien to normal earth standards and never get found out. While he was considering this, the nurse confirmed some of Danny’s most outlandish suspicions by sitting down without warning alarmingly close to him on the sofa; Danny felt a flush of unease, a whole tepid jug of it being poured down his neck and running all the way down to the shrunken tail at the tip of his spine. Staff Nurse Morgan, and all of Staff Nurse Morgan, he realised, was facing him, wearing a fairly significant expression, though what it signified he could only guess at. He felt he wouldn’t need to wait long to find out.

One Response to Malcolm Sharps: ‘TV Giant Clam’ (from a novel)