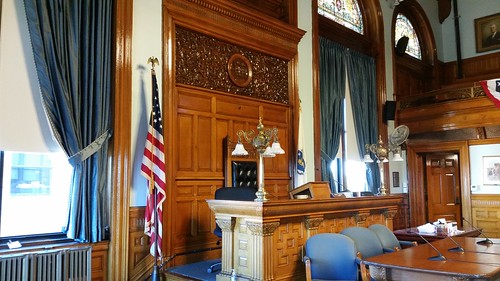 Here are some items of interest from the Agenda for the upcoming January 28, 2020, Lowell City Council meeting followed by the MINUTES of last Tuesday’s meeting. Both are edited to emphasize Council motions and responses and other reports or items that deserve attention

Councilor Mercier – Req. City Mgr. provide a report regarding the process of revenue generated by the use of empty lots charging people to park in and around the new court house.

Councilor Conway – Req. City Mgr. meet with DPW and other departments to explore the feasibility of using a “Chip – Disc” system (A-Tags) that is currently used in New York, Boston, Cambridge and other cities to identify companies that did work for trench repair and other project

Councilor Elliott – Req. City Mgr. have LPD provide a report regarding the number of response calls/missing persons reports from group homes throughout the City.

Councilor Chau – Req. City Mgr. invite Lowell General Hospital to make a presentation to the Council regarding their plans for providing health care services to the citizens of Lowell for the next two years.

Councilor Chau – Req. City Mgr. provide a report regarding the feasibility of holding a South East Asian New Year event at the JFK Plaza in April.

Councilor Chau – Req. City Mgr. provide an update regarding the status of signage for the area designated as Cambodia Town.

The City issued an RFP to sell the former Smith Baker Center for private redevelopment on July 2, 2019. The Coalition for a Better Acre (CBA) submitted the only response that proposes to create a performance hall and community center. The space would include programming for workforce development, arts, and education that will be modeled on other facilities in the region. However, CBA’s lack of experience with community center development, a long rehabilitation timeline, and critical identified funding that is from future competitive grant applications, was of concern to the RFP assessment committee.Given the City’s concerns identified in the RFP response assessment, the Department of Planning and Development (DPD) met with CBA and requested additional information to ensure that the rehabilitation plan is viable and will lead to the immediate stabilization of the building while the funds are raised for a long-term, large-scale project. CBA anticipates a project cost of more than $18 million and the City requested clarity on what costs are immediately required to stabilize and preserve the building. CBA is preparing the requested information now.

Process for direct election of Mayor by voters – This is the City Solicitor’s response to a motion by Councilor Elliott inquiring about the process to change the city charter to allow residents to elect the mayor.

I write in response to C. Elliott’s motion for a report on the manner and process in which the CityCharter could be amended to revise the way in which the City could allow residents to vote to elect the Mayor. As a Plan E municipality, the City Council currently selects a mayor via majority vote among the councilors-elect on inauguration day pursuant to M.G.L. c. 43, $97. A survey of the City Charters of other Plan E municipalities in Massachusetts found that this method was the typical mayoral selection method. For example, the City Charter of Cambridge, which is a Plan E municipality, adopts M.G.L., c.43, $$93-109 verbatim.  As a result,Cambridge’s mayor is selected via majority vote by the elected members of its City Council. Similar selection procedures can be seen in other communities that are not Plan E but have city council/aldermen arrangements, such as Everett. However, the City of Worcester, which is also a Plan E community, selects its mayor through a different procedure. Worcester’s City Council consists of eleven members, six councilors who serve in districts and five who serve at large. In Section 2-2(b) of Worcester’s City Charter, which was amended in 1985: “All candidates nominated in the preliminary election for the office of councilor at large…shall appear on the ballot as candidates for councilor at large in the regular municipal election and shall also be listed on a separate portion of the ballot as candidates  for the office of mayor. The candidate elected to the office of councilor at large and receiving the highest number of votes for the office of mayor shall be mayor. The candidate elected to the office of councilor at large and receiving the next highest number of votes for the office of mayor shall be vice-chair of the city council.” As a result, in Worcester the mayor is selected by popular vote by the electorate among only those candidates running for at large seats. Candidate running for district seats are ineligible to be mayor. Other than the selection process, the powers of the mayor of Worcester remain the same as in other Plan E municipalities.Lowell could adopt Worcester’s mayoral election process. Another option would be to adopt a process similar to, but not exactly the same as, Worcester’s process. For example, candidates for district seats could also be eligible to run at-large campaigns for Mayor. Should the City Council wish to amend the City Charter to modify the process for selecting a mayor, the preferred process would be through passage of a Special Act in keeping with theCity’s Home Rule powers.

MAYOR’S BUSINESS Presentation – Community Choice Aggregate (CCA).In City Council, M. Leahy introduced Jay Mason, registered speaker, who made presentation regarding Community Choice Aggregate Program. C. Elliott questioned opting in or out aspect of the program. Kathryn Moses (DPD) outlined the options available to consumers. C. Rourke questioned opting in versus opting out. C. Mercier noted that Council voted on matter a short time ago. C. Nuon noted the vote of the Council and that there should be an effort to have citizens opt back into the program. Stephen Malagodi, registered speaker, addressed the Council

Vote-Accept and Expend 100,000 from EOPSS re FY20 Municipal Staffing award Lowell Fire Dept. In City Council, Read twice, full reading waived with no objections. Motion to adopt by C. Rourke, seconded by C. Samaras. Adopted per Roll Call vote 9 yeas. So voted. C. Elliott commented on the grants and noted the use for them. Manager Donoghue noted the grants and how they would be used; including alleviating overtime costs to keep fire stations open. C. Mercier commented on the process for obtaining the grants. Manager Donoghue recognized the efforts of Maryann Ballotta for securing grants. Ms. Ballotta outlined the procedures used to obtain grants and how they are used. C. Conway commented on the effort involved and noted that it eases some budget concerns.

In City Council, M. Leahy provided appointments to various subcommittees to the body.In City Council, Motion to adopt and accept accompanying order by C. Elliott, seconded by C. Drinkwater. So voted.8. PETITIONS Claims – (3) Property Damage.In City Council, Motion to refer to Law Department for report and recommendation by C. Samaras, seconded by C. Mercier. So voted. C. Conway questioned the claims process including time of review; costs; payouts; and communications with petitioners. Solicitor O’Connor outlined the process for claims noting each claim may be handles differently. C. Mercier commented on thirty day limit in which to file certain claims.

Councilor Elliott – Req. City Council vote to request Statehouse delegation work with Administration to fund 4 million dollar earmark in Bond Bill – H4549 – “Act Providing for Capital Repairs and Improvements” – for the study, design and make capital improvements for a public safety facility with fire and police services in the City of Lowell.In City Council, seconded by C. Nuon, referred to City Manager. So voted. C. Elliott noted that earmarks were in place and commented on the efforts of the working group to identify them. Motion by C. Elliott, seconded by C. Rourke to amend to include report regarding parking bond bill. So voted. Manager Donoghue noted that a letter from the administration would be more effective than a formal resolution and that she would forward the interest of the Council. C. Rourke questioned time frame for parking lot and future plans for private parking. Manager Donoghue outlined existing project and possible private ventures concerning parking. C. Chau questioned process of earmarking funds at the State level. Manager Donoghue commented on some funds and how they were to be used. C. Samaras noted new court house is close to opening. C. Rourke noted that the opening of court house would be done in stages. C. Elliott questioned plans for interim parking. Manager Donoghue commented on possible locations for interim parking as well as the need for it. C. Nuon commented on satellite at Cross Point.

Councilor Elliott – Req. City Mgr./DPD report on status of properties located at 246.1 Market Street; the Power House and Coal Pocket Buildings.In City Council, seconded by C. Nuon, referred to City Manager/DPD. So voted. C. Elliott requested the report noting the location is downtown and something needs to be done on the blighted properties.

Councilor Samaras – Req. City Mgr. have Supt. Of Police provide a report regarding action taken to address violence in the downtown district at closing time of the establishments; additionally work with bar owners to develop solutions to address ongoing issues inside their respective establishments.In City Council, seconded by C. Mercier, referred to City Manager. So voted. C. Samaras commented on investigating possible change in late night closing times downtown; data should include the use of resources to patrol the area and identify trouble locations. C. Elliott noted it is time to change hours of operation for establishments. C. Conway noted that data should be used so that there can be a safety assessment as well. C. Mercier noted that the area is a neighborhood in the City and that they should be treated as such. C. Chau noted the need to research data and that problem bars should be identified and afford protection for properly manage bars. Manager Donoghue noted the issue remains and there will be an extensive report. C. Elliott noted that State Police have also provided resources to patrol downtown.

Councilor Conway – Req. City Mgr. provide update regarding employee incentive program offered by the City.In City Council, seconded by C. Rourke, referred to City Manager. So voted. C. Conway requested update noting the talent pool of employees in the City. Manager Donoghue noted that there was a current ordinance and that a selection committee will be formed.