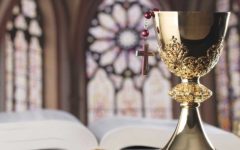 “Do you believe in ghosts?” his wife had once asked.

The empty church is full of ghosts. They huddle in the pews, immigrants whispering fervent prayers and American-born families who had inherited the faith of their forebears. His own childish self stands horrified before the depiction of Station VI of the Via Crucis; Jesus is scourged and crowned with thorns.  The boy can almost feel the cruel lash, and he wonders what happens to men’s hearts when they don a breastplate and a crested helmet.

The old man senses that child beside him or within him now. His grandparents and his mother kneel as the altar boy shakes a clear sweet jangle from the hand bells and the priest, his back to the congregation, raises the Host and incants in Latin. The only words the boy recognizes are Agnus Dei, the Lamb of God, gentle and pure.

The great organ sets the air around him trembling while women in pillbox hats or head scarves and somber men in suit jackets advance in single file to receive Communion. The boy sits with his third-grade class. The dark and austere figure of Sister Barbara St. Michael raises a hand for the students to rise and join the sacramental line. A powerful voice now joins the organ, and the boy glances over his shoulder to see his father in the loft with the hymnal open in his hands. He is singing Hibernia’s Champion, All Hail.

Borne on wings of charity, to Erin’s coast you flew

Bade Satan from her valleys flee, and his dark shrines o’erthrew

The ghosts mill through the empty church while his father’s voice echoes amid the marble columns and from the vaulted ceilings. His gaze turns upward through the incense-laden air to those reaches where faded paintings adorn the heights above the archways of the nave and transept; the prophets and saints of the Faith in billowing robes; the angels of heaven interceding in the affairs of the earthbound.

The boy held fast to that faith, but as the years moved on, the young man began to see it as a spiritual metaphor rather than a literal truth. And now the old man recalls a night, sitting on the stone wall of an old cemetery drinking beer with Tommy Murray under lowering oaks. The two of them looked out over the tilted stones splotched with the shadows cast by a porcelain moon. His friend raised his beer in some kind of resigned salute and said, “When you’re dead, you’re deader than you’ll ever be.” That seemed to sum it all up pretty well though something in the mind rebelled.

The music has stopped, the smell of incense faded. Silence reigns over the rows of dark empty pews. The weight of the past begins to oppress the old man, and he turns and walks toward the exit, toward a day uncolored by stained glass, unburdened by the weight of two thousand years of tradition, out of the gaze of the dead. Steps taken in this empty church are portentous; each one resounds in the impassable chasm between what was and what is.

He needs to walk again where his steps fall without an echo, where today is not suffused with yesterday. He whispers to the dear shadows of his mother and father that he has done his best. The old man no longer hopes for heaven, nor does he fear hell. He doesn’t believe in the miraculous birth or in the resurrection, but he does believe in ghosts, for they people the vacant rooms and murmur in these silent spaces until at last we join them.