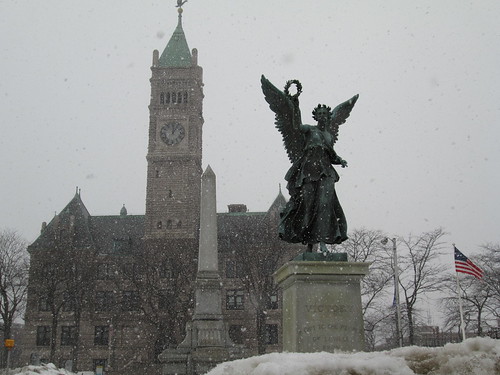 Each year since the birth of this blog I’ve posted a “year in review” article that highlighted some of the big local events of the year just completed. Although I stepped away from blogging for most of 2019, I hope to resume posting on a regular basis in 2020. However, I anticipate this site heading in a slightly different direction, with more about Lowell history and culture with just a touch of local politics. That said, here are some noteworthy events from 2019:

Lowell changes its method of electing City Councilors. In settling the pending lawsuit which alleged that the system of electing all councilors and school committee members in an at large, winner take all method, violated the Federal Voting Rights Act by diluting the impact of minority voters, the city council agreed to change the method of electing local officials. After much study and a non-binding referendum, the council chose a system that will elect 11 city councilors (two more than there are now) with 8 elected from districts and 3 elected citywide. School committee elections will also change with four members being elected from districts (each school committee district will consist of two council districts) and two members being elected citywide. The mayor will still be elected by councilors by majority vote on inauguration day. This change will take effect in the 2021 city election and districts will be drawn based on the results of the 2020 census.

2019 City Election. This November’s city election resulted in the replacement of one-third of the city council and one-third of the school committee albeit for different reasons. With the council, two incumbents, Ed Kennedy and Jim Milinazzo, chose not to run for re-election and a third incumbent, Karen Cirillo, withdrew after the preliminary because of illness. Replacing them on the council will be John Drinkwater who made his Lowell political debut in 2018 by finishing a strong second in that year’s Democratic primary for state senator; Sokhary Chau, who finished tenth in the 2017 council race; and former city councilor Dan Rourke who lost in 2017 after serving two terms on the council. For the school committee, incumbents Gerry Nutter and Dominik Lay lost. They will be replaced by first-time candidates Mike Dillon and Hilary Clark.

Notable Public Sector Retirements. As mentioned above, City Councilor Jim Milinazzo did not seek re-election this year with his departure being more of a retirement than a “pursue other opportunities” move. Also this year, the Lowell Plan’s longtime director Jim Cook retired. At Lowell National Historical Park, Deputy Superintendent Peter Aucella retired too. I group these three together because they came into public service in Lowell in the late 1970s and early 1980s and all played key roles in Lowell’s renaissance and have stayed involved in city political and public life ever since. Collectively, they provide us with an enormous store of institutional memory. While they have all retired, they are all (I believe) sticking around Lowell so it’s not like they will suddenly disappear. Still, their official departure marks a significant milestone in the city’s history.

Mill City Grows Leadership Change – It was 2011 when Mill City Grows burst on the Lowell scene by promoting neighborhood gardens and access to fresh food. The organization has grown steadily in stature, reach and influence. In 2019, it’s cofounders, Francey Slater and Lydia Sisson, officially stepped away from the organization. Because they did a splendid job in planning their departure and organizational succession, Mill City Grows continues to thrive in Lowell.

Elizabeth Warren for President – Fresh off her overwhelming reelection to the U.S. Senate in 2018, Elizabeth Warren announced her candidacy for President on a cold day in early 2019. On the strength of her detailed plans, her prolific fundraising and her own strengths as a campaigner, she shot to the top tier of Democratic candidates. Conventional wisdom says her standing slipped a bit in recent months, but we’ll have a better sense of her prospects in about six weeks with the Iowa caucus and the New Hampshire primary.

New Representatives in Congress and the State House. Lori Trahan took office as our representative in Congress in January and was immediately immersed in the cauldron of national politics. Whatever she envisioned doing in her 12th month in office, voting to impeach the president probably was not among the acts she imagined. But she’s handled it very well and has asserted strong local leadership in the fight to keep the Spinners baseball team in Lowell and affiliated with the Red Sox. At the statehouse, newly elected State Senator Ed Kennedy drew upon his long experience in local and county government to leapfrog any learning curve and quickly took strong stands on the many important issues that came before the Senate.

Hand-held cell phone ban. The state legislature finally voted to outlaw the use of hand-held cell phones while driving a motor vehicle. The law was enacted in 2019 but does not take effect until February 23, 2020. Offenders are entitled to one warning; after that the fines escalate from $100 to $250 to $500. Although this is a statewide measure, given the quite visible propensity of many Lowell drivers to pay more attention to their phones than the road, this new law will have a definite local effect.