John Wooding recently retired from his position as professor in the Department of Political Science at UMass Lowell. He is an occasional contributor to this blog. Born in Northampton, England, John is a U.S. citizen now, but retains strong ties to the UK through family, friends, and colleagues. He offers his take on the results of the UK election this week. Does it matter to our readers what happened? Most likely the answer is “yes” because of international repercussions of the decisive win by the Conservative Party. Prime Minister Boris Johnson is determined to end UK membership in the European Union as was preferred in a referendum three years ago, even though it was a close result.–PM 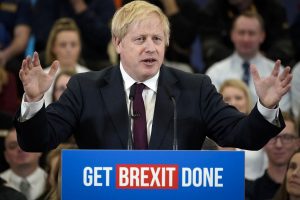 “In A Deep and Dark December”: The UK Election

This past Thursday, the Brits went to the polls to elect a new government, the first December general election in close to 100 years. Unusual timing for an extraordinary election. The results are now in, and the Conservative Party gained a substantial majority in Parliament, ensuring that Boris Johnson will continue as Prime Minister. It also means that Britain will leave the European Union (EU) and that Johnson’s slogan about Brexit—“Get it Done!”— will, indeed, be fulfilled.

Over the previous week, the polls had shown that the Conservatives would likely win, beating their rivals, the Labour Party, by a small margin. Of course, the polls got it wrong. In the end, the Conservatives won 365 seats in the UK Parliament to Labour’s 203 (there are 650 seats in the UK Parliament). A massive win, big-enough to enable Johnson to pursue Brexit after years of negotiations and extensions. Perhaps the biggest news here was Labour’s losses in the old, traditional bastions of Labour support in the North of England. Overall, this was the worst performance by Labour since World War Two.

The other big winner was the Scottish National Party (SNP), gaining 13 new seats. The SNP now has 48 MPs. Among losers, the Democratic Unionists in Northern Ireland (often a source of support for the Tories) lost two seats, and the balance of power in Northern Ireland is in flux, raising questions about the future of Northern Ireland and the Irish Republic. On top of all that the leader of the Liberal-Democrats (the third largest party) lost her seat.

So, what does all this mean? The election was about Brexit. The leaders of the two main parties (the UK is what political scientists call a “dominant two-party system”) are two of the most unpopular leaders in British political history. This vote was not about them directly, but it was about which party and leaders the electorate thought could end the disastrous and disturbing story of Brexit. The three years since the referendum have been catastrophic for Britain. The country has become deeply divided, the constant efforts to negotiate Britain’s exit (and the political shenanigans that have marked those efforts) created an unprecedented political crisis. The entire political class is viewed with profound skepticism, and, sometimes hatred, by the general public. In addition, traditional Labour supporters shifted to the Conservatives in large numbers. Not, perhaps, a permanent defection, but certainly a potent reminder that the old party identifications have all but disappeared. Some of the poor voting for the traditional party of the rich and, even, some of the wealthy voting Labour, thinking that just—maybe—this would result in a call for a new referendum and an end to Brexit (old-style British conservatism was traditionally internationalist in outlook). As The Economist (not a magazine I generally agree with) rightly points out, Johnson did what Trump did—created a coalition between the rich and the poor around cultural matters, although the less charitable might define such “matters” as xenophobia, homophobia, and racism. The dog whistles in the UK are as ubiquitous as they are in the U. S. Brexit is still the code for anti-immigrant, isolationist sentiment, and a desperate longing for an imagined glorious past.

The EU has divided both parties, and their basis of support—both Conservative and Labour supporters (and the parties themselves) have been pro and con since the UK joined the European Economic Union back in 1973.

What are we seeing? On the Right: anti-immigration vitriol, the belief that a bunch of European bureaucrats are controlling British society, the blatant appeal to nationalism, and the cynical pandering to working folks’ sense of being forgotten in the shiny and sparkling global economy. Sound familiar? On the Left: ambivalence about the EU has long dogged the party intellectuals and the old-school socialists. Many of these argued that the EU is just another big club of rich folks and multinational corporate capitalism. Or, as others in the Labour and progressive movements reasoned over the years, EU membership strengthens social welfare programs, social justice, and the rights of workers.

Throw into this mix the collapse of British global power and influence, the demise of manufacturing and the union jobs it represented, the rapid and international growth of the service economy, and the changing demographics of Britain, and you have a potent and toxic stew that challenges all the assumptions made about who votes for what and whom. And, in the current election, an unpopular and uncharismatic leader who has advocated a return to Labour’s socialist roots failed to offer a significant alternative to Johnson’s “Get it Done.” 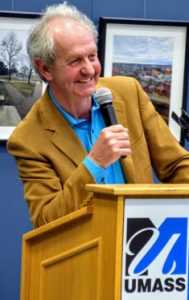 In a completely unscientific survey of my friends and family back in the UK, the thing I heard most was, “At least if we vote for Boris, this thing will end.” Despite all the learned analysis and the endless talking heads pontificating on what happened in the UK last week, I certainly wouldn’t discount the idea that many went to the polls and voted for the Conservatives because they simply can’t stand any more of Brexit. In other words, perhaps this was not some profound ideological shift but rather, for many, the desire to put an end to this damn thing?

Add to all this a large helping of lies, propaganda, and the influence of the gutter and tabloid press in the UK (often from both sides, but more often from the Right), and you end up with what is politely called disinformation—but more precisely complete fabrications and falsehoods. And all these problems are massively compounded in the age of social networking: the UK can undoubtedly match the U.S. for the obscenities and distortions that appear on your iPhone and Facebook page.

So, Johnson will take the UK out of the EU by the end of January, but this won’t end the struggle. The negotiations and back-and-forth will continue, and the damage may well be enormous: the fate of Ireland lies in the balance as there seems to be no answer for what might happen if a custom barrier ends up once again separating the North from the Republic. Whatever transpires, there’s no good outcome. Nationalist sentiment is increasing and Unionists are digging in their heels. Both sides are unhappy with the current proposals, and the economic consequences for the Republic are potentially enormous. The same goes for the UK, where some economists have predicted a four percent cut in Gross National Product over the next ten years and massive dislocations for industry immediately if there is a no-deal Brexit, together with the potential for food and medical shortages when the British moat is reestablished figuratively between the island and continent. And this does not even embrace the staggering number of laws and regulations that will need to be re-written when the UK separates from Europe.

And then there’s Scotland. The likelihood of a repeat referendum on independence for Scotland has shot up like the mercury in a thermometer on the first hot summer day. There is every likelihood that Scotland will become an independent state and petition to join the EU. You could hardly blame them.

In all of this, why should Americans care? Well, there is the special relationship with America’s oldest ally, and what transpires there will inevitably affect the U.S. Of course, Brexit’s impact on the EU, on Ireland, and the potential for dislocation of global trade is inevitable and mostly unknown. But, perhaps, most of all, Johnson’s victory suggests that the Democrats and those who want to see an end to Trump in 2020 need to recognize that the opposition must have a likable and electable leader, that the alternative policies and ideas they promote must be clear and appealing to a wide range of voters (especially those who feel left out by the relentless pursuit of the neo-liberal project these past decades), and that focusing solely on trying to oust an unlikeable and unpopular leader is not a winning strategy.

While it is always dangerous to make too much of similarities between the UK and the U.S. there are clearly comparable tropes and causes that go way beyond arrogant and power-hungry leaders with bad hair. You have been warned.

3 Responses to What Happened in the UK Election? John Wooding’s View