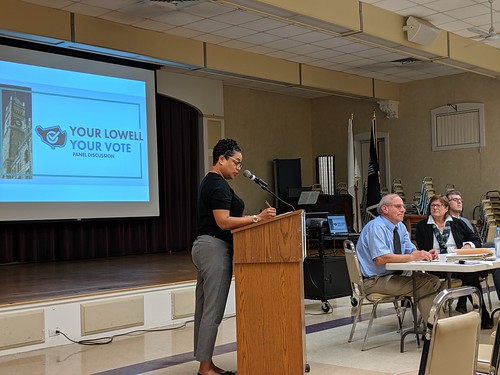 On Monday, October 7, 2019, City Manager Eileen Donoghue and the city’s Law Department convened a panel discussion on the two new election system options that will appear on the November 5, 2019, municipal election ballot.

I attended the session but didn’t take many notes. Fortunately, another attendee, Joe Smith, recorded much of what was said and agreed to share his notes. Here they are:

The Change to Lowell’s Voting System

Lowell must change its voting system to comply with the Voting Rights Act as agreed in a court settlement that has been captured in a Consent Decree.  Within that agreement there were several options that Lowell could adopt in compliance with that Decree.  The Lowell City council narrowed those to 2 options and will present those options on the ballot as a non-binding referendum on November 5th, 2019.  The City Council will then select a single option using the referendum results as guidance in their selection.

The two options selected for further examination are Ranked Choice Voting (RCV) and a Hybrid 8-3 System (8 District Councilors, 3 At-Large Councilors).  With RCV the number of councilors will remain at 9, and school committee members will remain at 6 (plus the Mayor).  With the Hybrid System the number of councilors will increase to 11, while the school committee remains at 6.

Although these are the two options available, not all the details of each will be settled before selecting the one to go forward.   Those details will be settled when the final option is selected, and will likely be captured in a revised City Charter with approval of the Court for compliance with the Consent Decree, and with the approval of the State for compliance with State Laws.

The Moderator initiated the discussion and referred to the Voting Rights Act and its subsequent clarification to provide the basis for the change in voting system.  She said it was clear that the City would lose a court case if it had not settled, and the costs of that loss would be significant.  She then used examples of prior court cases on the subject to indicate how other communities resolved similar lawsuits, and the follow up results of the change in those communities, with mixed results.  In any case, she provided a firm basis for the change that Lowell needs to enact.

The Hybrid 8-3 Proponent outlined benefits of the system, the primary one being the geographic diversity of elected officials that was ensured, and the likely ethnic diversity that would follow.  He listed other benefits such as making campaigns more affordable and likely increasing participation in the process.

The Cambridge Commissioner described the voting process in that community.  Apparently, Cambridge still counts the ballots by hand, and as a result they need to hire a staff of about 30 counters (in addition to the poll workers) to go through the process.  It is a lengthy process and only those being elected on the first count are known the night of the election.  The second and subsequent counts are done the next day to fill out the election.  Cambridge is apparently in the process of computerizing this process, and she described it as a fairly long (up to 2 years) undertaking to not only do the job technically, but getting the State approvals and certification of the computer process.

The Worcester Commission described the process that they use.  Two items of note with that, 1) in the districts a preliminary election is held if there are more than 2 candidates, and 2) the district maps are updated with each census (every 10 years).

The RCV system is one where the voter ranks their choices, first preference gets #1 vote, second preference gets #2 vote, and so on  – exactly how many votes are allowed is one of the details that needs to be settled (I would suggest 9 for council, 6 for school committee).   That should be the easy part once the voters are educated on the system.

Now that the thresholds are established the votes are counted and any candidate that meets or exceeds the threshold for that race is declared “elected”.  Due to the math, it is impossible that all seats are filled on the first count.

So now the fun begins – first of all the excess votes (the number over the threshold that any candidate receives) are redistributed via an algorithm to the second choices on those candidates’ ballots.  For example, let’s assume the top vote receiver for city council receives 2200 #1 votes, well over the threshold of 1401.  In that case the “excess” is calculated as 2200 – 1401 or 799.  Then the ratio of that number to the candidates total #1 votes is calculated as 799/2200 and used as a weighting factor to apply to the second choices on those 2200 ballots and then that number of votes is “transferred” to the #2 selections.  That process continues until all candidates’ excess votes have been transferred to other candidates.

Because Cambridge is hand counting ballots (as opposed to a computer algorithm) they used a different method of transferring excess votes.  Although that method is statistically accurate, there is some randomness to the results depending on what precinct is used to start the count.  Unfortunately, that method is captured in the City Charter so even now with the transition to computer counting, it is repeated.  That should not be an issue for Lowell, as long as the City captures the counting method in its Charter before creating the computer algorithms.

The Hybrid 8-3 System does not require ranking of choices, but there are other complications to the ballot.  With 8 districts there will have to be 8 sets of ballots, one for each district.  That does not complicate things for the voter, but it will require the election commission to create and distribute 8 sets of ballots.

Once the ballots are set and distributed, the counting is similar to the current system and should provide no unique challenges to the election commission.

As noted earlier, the City Council will have final say on which of the two systems will be selected (decision in December 2019).  However, their decision should be informed by the voter selections in November.  One possible issue with the November ballot question is that it will be in the form of 2 question, each a yes/no selection of the two candidate options.  For a voter’s intent to be meaningful there must be one “yes” vote and one “no” vote.  If either both “yes” or both “no” they cancel each other out, and although counted, will not make a difference in the final result.

Details to be Finalized

The details to be finalized will likely have to be approved by the court so that the intent of the Consent Decree is retained.  These are some of the items that need to be finalized.

For RCV the number of selections provided on the ballot should be tied down.  If you consider a ballot with 18 candidates in the left column, and each with a row of choices (#1, #2, #3 et cetera) you could create a burdensome ballot with many columns, and it would be tedious for the voter.  (This is why I would recommend not more than the number of seats available).  And there could be more than 18 candidates, making the challenge of ranking all of them even more difficult.

For RCV the computer algorithm must be defined, approve, implemented and certified.  That process will take time and money and should be started early if that is the choice.

For the Hybrid System the main challenge will be to settle the districts.  They need to reflect the results of the 2020 census, but that data won’t be formally released until April 1st, 2021.  That will be too late for the large amount of work needed in the run-up to the November (or September preliminary) election.  The City will apparently hire an independent agency to define the districts in accordance with the provisions of the Consent Decree.  They will either have to use the 2010 census data, or preferably the unofficial 2020 census data to start that process, maybe making some final adjustments when the official data are released.

In defining the 8 districts they will likely have to subdivide each into 4 precincts to comply with State law that limits precincts to 4000 residents.  So, we should end up with 8 Districts (maybe called Wards) each with 4 precincts for a total of 32 precincts (there are currently 33).  Each of these precincts should have approximately the same number of residents.  In addition, as a result of the Consent Decree, these precincts must be defined so that the Districts that they comprise must have a majority of the eligible voters in two of those Districts be minorities, as defined in the Consent Decree as a combination of SE Asian ethnicity or Spanish ethnicity.  There is a clear distinction between the number of residents and the number of eligible voters (voting age citizens), so whereas these Districts may have similar number of residents, the eligible voters may differ by quite a bit, and the actual voters even more so.

There will be costs for both of the systems to be implemented and maintained.

For RCV the primary added cost will be developing the computer algorithm, getting approvals, implementing them and getting it certified.  I believe Cambridge is going through a similar process now at a cost of about $350,000.  In addition, there may be costs to modernize the precinct level voting equipment, but that should apply no matter which option is selected.  Most of the RCV costs will be non-recurring so they are basically one-time costs.

For the Hybrid 8-3 the primary cost will be for the independent agency tasked with defining the districts and getting the approvals necessary.  These costs may be complicated by the timing of the data from the 2020 census and the need to update the results when the final data is released.

Comparison of the Options

With the primary intent of the change being to comply with the Voting Rights laws as interpreted by the Consent Decree we should assume that both options achieve compliance since they are part of the settlement agreement.

The RCV Proponent will point to the fact that the RCV system will not depend on the minority population being segregated into districts, but rather they can elect their candidates without regard to where they live in the City.

The Hybrid 8-3 Proponent will point to the fact that the smaller districts (compared to the whole city) will make it easier for candidates to compete, and in doing so encourage more participation in the voting process.

Both Proponents made compelling cases for supporting their respective options.  Although the costs of each are different, they are minor factors and probably should not play too much in the decision process.  More likely it is the two key issues mentioned above that should be weighed in the mind of the voters and subsequently the city council when arriving at the decision.  And once that decision is made there is a lot of work to be done, as it is a case of the “devil is in the details.”