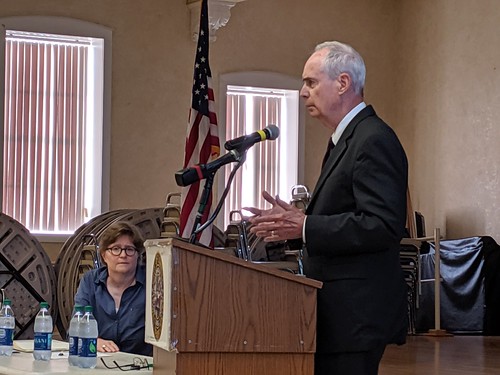 The city of Lowell hosted an information session last evening at the Lowell Senior Center to acquaint residents with the election system options available in the settlement of the lawsuit against the city for alleged violations of the federal Voting Rights Act. The primary speaker was Professor Theodore Arrington who has been retained by the city as its expert witness for statistics and voting systems. City Solicitor Christine O’Connor assisted in answering questions.

Professor Arrington explained that the plaintiffs brought the lawsuit under Section 2 of the Voting Rights Act of 1965, specifically the portion of Section 2 that outlaws “vote dilution.” Most claims in this section allege that a city’s use of at-large/multimember elections (as we have in Lowell) prevent minority voters from casting sufficient votes to elect their preferred candidates thereby allowing a cohesive majority group to win every seat in every election.

The lead case that interprets this section of the law, Thornburg v. Gingles, a 1986 U.S. Supreme Court decision, established a three part statistical test to determine a violation. Professor Arrington emphasized that the evidence needed to win a lawsuit like this was entirely statistical and that intent was not relevant. He then said that when he reviewed census data for Lowell and historic and detailed election results, he concluded that the plaintiffs passed “the Gingles test” and would win at trial. For that reason, he said the City Council was prudent to have settled the case since going to trial would have cost the city millions of dollars in legal fees and would have further divided the city politically.

Most of the presentation was spent reviewing the settlement in which the parties agreed to four different voting methods that were all acceptable to the plaintiffs. It is up to the City Council, no later than December 3, 2019, to choose one of those systems to be used in future Lowell city elections beginning in 2021.

The settlement also gives the City Council the option of designating two of the possible voting methods as “finalists” and placing a referendum question on the November 2019 city election ballot which would ask voters to express their preference of those two choices.

Professor Arrington explained that the council is not required to put these questions on the ballot, nor is it required to accept the one that gets the most votes in the referendum, but the reason for that is a legal one. It is the council’s responsibility to make the decision and the council cannot legally delegate that responsibility to the voters by making the referendum a binding one. Although he never came right out and said it, Professor Arrington clearly implied that the council would almost certainly be guided by the will of the voters as expressed in the referendum.

As for the four systems, here they are:

So those are the four options. Remember, the plaintiffs in the lawsuit have already expressed their preference: they would be content with any of these four. It is now up to the 9 current city councilors to choose which system will be used in Lowell beginning with the 2021 city election.

In the coming days, I will try to write more about this issue, sharing some of the questions that have arisen at the information sessions I have attended.