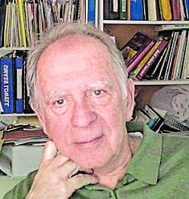 My friend and mentor Charles Nikitopoulos of Lowell, Mass., passed away a few days ago. His obituary is here. I want to share my thoughts about what he meant to me as well as to the community and university of which he was a part for decades. He came to Lowell at six years old from Greece, and made a life and a living in the city. I never met a better person. He was the definition of humanitarian and citizen, on top of being the kind of husband, father, grandfather, friend, teacher, runner, and gardener that we all want to be.

I have a hundred things to say about Charlie, and will say more in a follow up post on this blog, but I know him well enough to think he might want me to start by posting a poem in tribute to him. He sometimes commented on posts on this blog under the name Kosta. He was Internet-savvy very early. I can hear him saying, “Paul, put up a poem on the blog.”

Of all the activities Charlie was engaged in, he had a special place for poetry in his personal journey. He found dozens of opportunities to bring poets and poems into the life of the city, from events sponsored by the Hellenic Culture Society to his editorial work on the innovative online bioregional journal at UMass Lowell called The Bridge Review. And he wrote haiku and other poetry. In his house in the Highlands neighborhood, one bookcase has a long shelf of poetry books that he collected and referred to regularly. He pushed for Lowell to establish a Poet Laureate position. As I mentioned, I’ll write another post with more recollections about him.

Here’s one of Charlie’s poems from The Bridge Review (1998 issue). He wrote this in a writing workshop sponsored by the Hellenic Culture Society, which included Mary Sampas, Walter Bacigalupo and Mary Bacigalupo, Xanthe Mangiavas, Eleni Zohdi, and others.

Every summer I grew my father’s tomatoes.

I trimmed, weeded, and watered,

And planted in the most sunny spaces,

Usually, to no avail.

Every summer in a shady yard

Behind a five-family on Lombard Street,

I remember him sitting in his chair,

This summer, after an inconvenient illness,

I discovered that tomato vines dutifully

Sipping a Sam Adams in my backyard chair,

Now here’s one for Charlie. In 2004, Athens, Greece, hosted the summer Olympics. Organizers in the Greek-American community in Lowell produced a companion event at the Lowell High School auditorium with songs, dances, and more. I’m of French Canadian-American background, 100 percent, but have always been welcomed warmly in the Greek community in Lowell, which explains why I was invited to write something for the Lowell celebration, a local cultural Olympics. I didn’t know what to write for the special occasion until I found myself in a plane descending on Montreal, Canada, and saw the stadium built for the Olympics in 1976. And I thought about those cultural Olympians in the Hellenic community in Lowell, of whom Charlie was a leading light. Charlie was a culture-keeper, a memory worker who looked forward as much as to the past.

Listening as a Sport

On a morning when ponds near Montreal are giving up their ice,

The Air Canada jet banks low over the white stadium

Docked like a mythic ship on the old Olympics site.

I close the in-flight magazine, whose cover touts the coming Athens games,

Contests that will write themselves into the record in this jagged time.

Greek and non-Greek, we’ll all be philhellenes until the flame recedes.

Among the most devoted spectators will be the cultural regulars

They lean in to catch each gesture.

They squeeze story-sponges when they talk and teach.

A documentary about Sparta on a rainy night downtown.

Eighty crowd a cooking demonstration at a church festival.

Two busloads of them ride to Manhattan to see Mycenaean art.

At a piano recital, 200 applaud for a Greek-American prodigy.

They are the muscular memory workers—

As elite as Kenyan runners in every April’s marathon.

Make room for these champions when the anthem resounds.