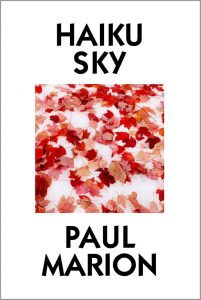 My new collection of poems is published by Brendan Gaylord of SuperLargePrint.com, a specialty publisher of books featuring extra-large print, twice the size of the large-print books available in public libraries, for people with sight challenges. Brendan takes books and parts of books that are in the public domain, meaning beyond copyright restrictions so that anyone can bring them into print, and produces his extraordinary volumes to serve a slice of the reading public. He began making one-off books for his grandmother when her eyes were weakening and she still wanted to read from actual books. From there, he realized a business opportunity may be at hand.

When I saw the books at the home of his mom and dad, Susan and Charlie Gaylord of Newburyport, I asked Brendan if he would be interested in doing a book of haiku. He liked the idea. The haiku in this book were written in the past 40 years. Every once in a while I’d get the haiku bug and sit down to compose the small poems.

With the South Common haiku series in the book (2012), I tried to create one a day in my head while I walked Ringo the dog in the park. I’d come back home and write out the lines, revising if necessary, and then posting immediately on Facebook to keep the process in the moment as much as possible. The Hurricane Coup haiku were written during Hurricane Bob, August 1991, the same day as a coup was in motion in the Soviet Union (the coup failed). There’s another sequence called Riverwalk Haiku with poems based on observations and happenings along the Merrimack in the early 2000s. The book concludes with a section of haiku on scattered subjects.

If you are interested in the haiku or want to support Brendan’s larger mission of helping people with sight challenges, the book can be ordered at this link.

The photograph on the cover is by Jennifer Myers, an image of brilliant maple leaves on the ground in the Acre neighborhood after a fall snowstorm last year. As soon as I saw the image posted on Facebook, I knew it would make a striking cover image—without knowing that it would be an excellent choice for the haiku book. The image itself is a visual haiku with the simple but startling combination of vivid leaves and fresh snow. I think the Japanese haiku writers would approve.

One Response to ‘Haiku Sky’ and SuperLargePrint.com