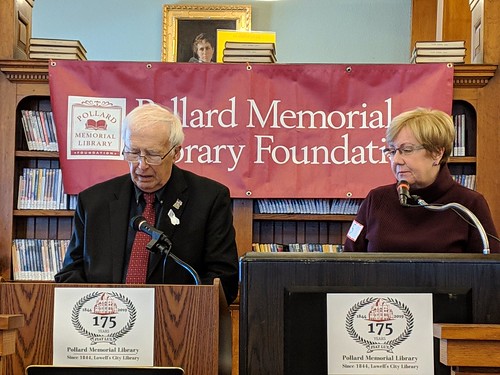 Mayor Bill Samaras reading from On The Road while City Manager Eileen Donoghue waits to begin reading her section.

On The Road Marathon

The Second Annual On The Road Marathon was held yesterday at the Pollard Memorial Library and at the Middlesex Community College Academic Arts Center (formerly known as the Rialto Building). Organized by PML’s community librarian Sean Thibodeau and inspired by New Bedford’s marathon reading of Moby Dick, this Lowell event featured more than one hundred volunteer readers taking turns to read Jack Kerouac’s iconic book, On the Road, out loud, from start to finish. 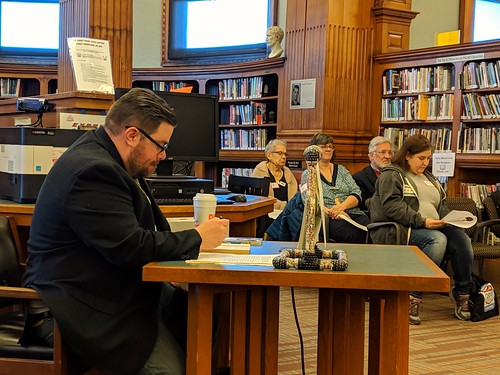 Sean Thibodeau, the maestro of the On the Road Marathon

If you are interested in Lowell and Kerouac, check out Paul Marion’s blogpost from earlier this week in which Paul writes about an event held back on March 17, 1986, to benefit the newly formed Jack Kerouac organization in Lowell. Participants in the 1986 event included fellow Beat poets Allen Ginsberg and Gregory Corso.

Also, check out the MRT website for information on tickets to The Haunted Life, a new play adapted from a 1944 Kerouac work which begins performances on March 20. 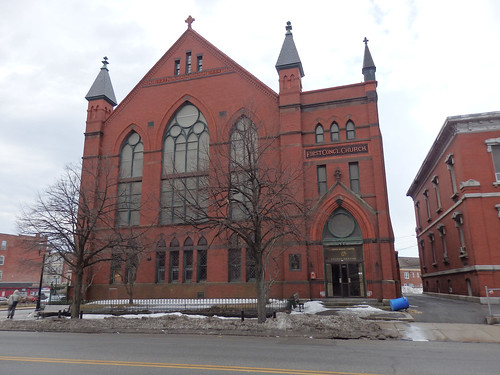 A report in this week’s city council packet seems to announce the death of the Coalition for a Better Acre’s efforts to transform the vacant Smith Baker Center into a community center and performance space. The last I heard, CBA was locked in protracted negotiations over the purchase of the building from the city of Lowell pursuant to an RFP from back in 2015. (Here’s a CBA blog post from a year ago that describes the organization’s vision for the site).

This new report states in part, “after considerable work by CBA and the City’s Law Department to complete the property disposition, the RFP was cancelled in 2018.” Cancelled? I guess I missed that announcement.

Here’s some background: The red brick Smith Baker Center which is just across Merrimack Street from City Hall and the Pollard Memorial Library was constructed in 1886 as the First Congregational Church. Under the leadership of the Reverend Smith Baker (Smith was his first name), the church thrived for many years. However, by the 1960s, the city’s population of church-going Protestants had shrunken and several churches merged together, the First Congregational being one of them.

In 1975, the church sold the property to the city of Lowell for $85,000. The city used it primarily for the Lowell Senior Center which was located on the first floor. Because the area around the church was already built up when the church was constructed in 1886, the dimensions of the available lot were more square than rectangular, so the interior of the church was atypical as far as churches go in that it mirrored the shape of the lot (square, not rectangle). The upper floor of the building – the church portion – was built more like a theater than a traditional church with stadium style seating on three sides of the altar. Consequently, when the space ceased being used as a church, it made an excellent performance venue that featured acts such as

The Smith Baker was also used by the Lowell Opera Company, the Merrimack Repertory Theater production of the Lowell Play in 1980s, Command Performance operatic group, Lowell Memorial Auditorium for either Nunsense or Sister Act (nuns musical), Angkor Dance Troupe, Masters of the Steel Guitar presented by the National Council for the Traditional Arts, and others.

With the opening of the privately-owned-but-rented-by-the-city senior center at Broadway and Fletcher Street in 2002, the Smith Baker Center was left vacant and has remained so ever since. Even worse, leaks in the roof and elsewhere have been neglected leading to accelerated decay of the interior of the building (something I’m sure makes it unattractive to potential developers). 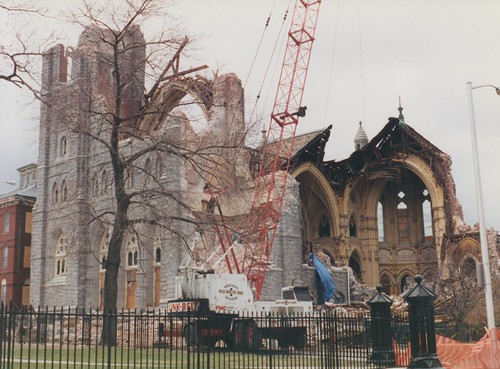 This new report goes on to say that the city DPD is drafting a new RFP which it expects to publish this coming spring. It sounds like the architectural equivalent of a late fourth quarter Hail Mary pass in football. Are we looking at a replay of the St. Peter’s Church saga where unrepaired roof leaks inevitably led to the necessity of razing the entire building in a classic example of demolition by neglect.

It will be interesting to hear what questions councilors will have on Tuesday night. 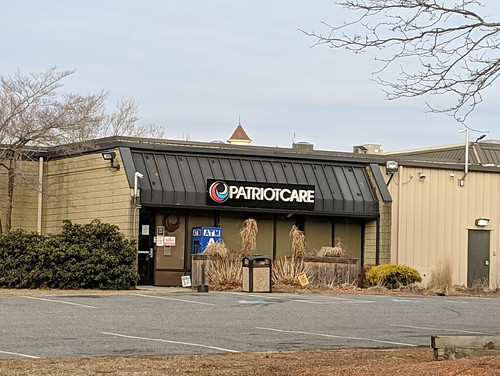 Retail Marijuana not yet open for business

On Thursday, the state Cannabis Control Commission did give its final approval to Patriot Care to begin cultivating adult-use marijuana at its Lincoln Street facility in Lowell according to a Lowell Sun story. The same story reported that formal approval for Patriot’s retail facility on Industrial Ave is expected later this month. 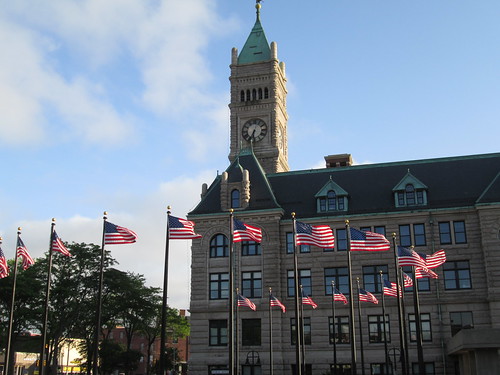 At last Tuesday’s council meeting there was a discussion of “bad bills” submitted by the school department to the city council in the hopes of payment. Although the matter was continued pending the receipt of additional information, those councilors who spoke on the report did not seem inclined to bail out the schools with additional funding.

Here’s how it works at the state level (which I assume mirrors the city’s procedures). The state legislature (or the city council at the local level) appropriates a certain amount of money for a department for the fiscal year. Let’s say the department wants to buy a new computer. Here are the steps that must be followed:

The system works pretty well provided you follow the rules. It also requires some self-discipline and some advanced planning because unlike an individual, you can’t just visit the Amazon website and order something any time the spirit moves you. You have to follow the procedure I describe in the preceding paragraph.

Let’s say you took delivery of that computer on June 29 and received the invoice along with it, but you went on vacation the next day and completely forgot about the invoice which was buried under a stack of papers on your desk. You didn’t remember the invoice until August 15 when the vendor called looking for payment. It’s now too late to submit the invoice for payment, because the budget office has closed out the books on that fiscal year and any money that was left over reverted back as “free cash” or whatever it might be called. And because the item you received was purchased with Fiscal Year 2019 funds, you cannot use money from Fiscal Year 2020 to pay that bill from the prior fiscal year.

Your invoice is now a “bad bill.” The only way to pay the vendor is through special legislation (by the state legislature for state entities) or by a vote of the city council (for city entities).

Now it’s inevitable that one or two bills slip into this bad bill category each year. That’s why there is a process to pay the bad bills. But the process is purposely made difficult to provide an incentive to do it right in the first place.

On Tuesday night, councilors were looking for a firm list of actual bad bills (as opposed to other liabilities the school department is trying to get the city to pay) and an explanation of what each of the bad bills is for. That list, when it is presented back to the council in a future meeting, will be pretty good evidence of the scale of the problem in the school department’s budget office under the previous regime.