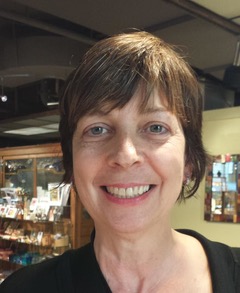 Starting last fall, my blogger-colleague Paul Marion began posting updates on local writers and poets who Paul found were doing “interesting and substantial things” with their work. That effort has yielded 22 writer profiles and has reminded us of others who should be included on the roster and introduced us to people new to the community.

Emily Ferrara is in that latter category. She is primarily a poet but is experimenting with the visual arts, especially painting, drawing and photography. She works out of a studio at the Gates Block and exhibits her photography at the Arts League of Lowell (ALL) Coop Gallery and two years ago moved to Lowell from the Worcester area. The reason she was in Worcester was because of her 30+ year career in health care and medicine as an educator, grant writer, project manager and advocate. She maintains a faculty appointment at UMass Medical School where she has taught doctor-patient communication, cultural competence in medicine, creative writing.

Because I like speaking with writers and because I’m always interested in why someone moves to Lowell (a consequence of my long-ago observation that most people aspired to leave the city), I recently met Emily at Brewed Awakening to learn more about her and her work.

Google her name – Emily Ferrara – and you’ll find that she is already a substantial and respected poet. (Check out her profile on Poets & Writers website). Her poems are published in literary journals, magazines and anthologies, and she has been featured on the public radio program “The Poet and the Poem at the Library of Congress.” She is a Pushcart Prize nominee, and winner of the Frank O’Hara Award from the Worcester County Poetry Association. Most recently, her poems appear in Poet Trees, an art book of photographs and the poems inspired by them.

In her award-winning poetry collection, The Alchemy of Grief, (Bordighera Press 2007) Emily explores a mother’s grief following the death of her 19-year-old son.  In one of the poems, “Bad News in the ER”, she uses dialogue to convey the rawness of the ER experience. She explained that the experience depicted in the poem was surreal because as a professor who taught doctors in training how to break bad news, she found her own receipt of the catastrophic news about her son both devastating as a mother but also an involuntary exercise in evaluating the doctor’s technique. This incredibly powerful poem is available online.

Emily was drawn to Lowell by the city’s vibrant arts scene and while she is doing much with the visual arts, she still sees herself as a poet first. She hopes to also become active in Literary Lowell – look for her as a reader at next weekend’s On The Road Marathon – and would love to help create a virtual clearinghouse of activities, readings and events to publicize the breadth of offerings and raise the profile of Literary Lowell.

As for what’s next for her as a writer, Emily said that she is at work on a new manuscript, challenging herself to experiment with a new lexicon.  “I’ve sworn off words my life has overused.  It’s too easy to fall back on the familiar,” she says, “both in language and in form.  What better way to experiment than in a new city, especially one known as a breeding ground for reinvention.”

Emily closed our talk by saying her dream is to bring poetry, literature and the arts into right relation with social justice, empowerment and public health movements.

2 Responses to Emily Ferrara: Drawn to Lowell by the Arts