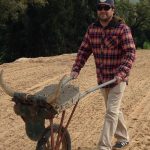 Checking in with writer, poet, and multifarious arts guy Dave Robinson, we learned that he’s back from a Writer-in-Residence gig at Cultívamos Cultura in São Luis, Portugal. He was at the arts center in a dual role with his wife and creative partner, Anna Isaak-Ross, an accomplished artist as well as being part of the professional staff at the UMass Lowell Art Department. Anna did a photography residency at the center a few years ago.

While in Portugal, he and Anna collaborated on a project documenting the Portuguese-made Famel motorcycles in the tiny inland towns and small cities of the Alentejo region. They are producing a photography book with the encouragement of Cultivamos Cultura, the UML Art Department, and others.

Dave says, “The book will feature more than 20 Famel owners from 18 to 92 years old! The images and text highlight the beauty of the landscape and culture. The book looks at daily, mostly rural, working life in a place that has mostly avoided complete modernization as seen in other parts of Europe.” He anticipates book-launchings on both sides of the Atlantic next summer.

The author of the substantial Sweeney in Effable, Dave has a new collection of poems that he has sent to several publishers for consideration. The manuscript is a mix of new and older work, including a sonnet cycle exploring the adventures of a high school hockey team. The sonnets link to Dave’s fictional home base, Seawell (blend elements of Seabrook, N.H., and Lowell), the stomping ground and surfing zone for the above-mentioned Sweeney character.

Dave, Anna, and their two children were chased from their North Andover residence by the natural gas disaster in the area this fall. They fared better than a lot of people, but the crisis kept them in temporary housing for a long stretch. They’re back in place, fortunately. Some readers will remember Dave with the Urban Village Arts Series at the National Park Visitor Center several years ago. After Lowell High School, he earned degrees at the University of New Hampshire and San Diego State University (MFA in Creative Writing).

In the photo, Dave has a set of bull horns mounted on an old Famel motorcycle tire. It is the first tool the locals use to begin training horses how to fight bulls in the Portuguese style and tradition.