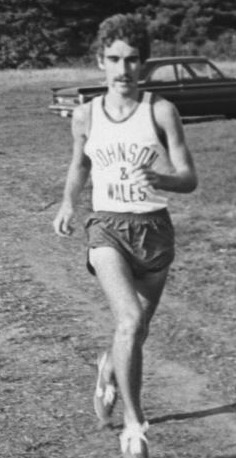 Bob Hodge grew up in Lowell and went on to graduate from Lowell High (1973) and University of Lowell (1990). He was (and still is) one the greatest runners to come out of this region. He’s also a writer, having previously shared stories with us about his experiences with road races and as a student at LHS. Here Bob tells a Thanksgiving tale from his time at Johnson & Wales College in Providence, Rhode Island which beautifully captures what life was like in 1973.

I was just finishing my first semester at Johnson & Wales JC in Providence, a C student who excelled in typing class. I wish I still had the keyboard skills I had then. Cross Country running was prominent that Fall as it was for many years and I had a solid season finishing 14th in the JC Nationals in Tallahassee, Florida, also my first time.

I remember we flew Pan American and they were using “real” silverware. My roommate decided to pocket the silverware for our dorm room collection which came in handy when we made some meals on a hotplate. He got nailed by airport security.

After the season wound down a teammate from Connecticut asked me if I wanted go home with him and run the Manchester Connecticut Thanksgiving Day Road Race. I called my family to tell them that I would not be home for Thanksgiving.

In 1973 this was already a historic race that had originated back in 1927. The final stretch is a parade route lined with thousands of spectators for the race. I was in good fitness shape from the Cross Country Campaign and I went right out with the leaders who were some of the best runners in New England.

The course is a bit short of five miles and the early miles are more challenging. That combined with going out hard to separate myself from the pack caused me, at the half way mark to lose some ground on the leaders although I was still running strong. On the final stretch with the enthusiastic crowds I was running neck and neck, back and forth with someone I did not recognize. Turned out it was future teammate Bill Rodgers. We finished 5th and 6th.

The local newspaper (which was also a race sponsor) provided plenty of coverage with photos of the top ten men. My teammate as I remember didn’t run so well and seemed irritated as we went for a short jog after the race.

When we arrived back at his house he immediately began doing yard work with his dad and also some other kind of home improvement projects. I suppose I should have offered to help but I just went and showered. “Bobby, my dad does this every time I come home he makes me work with him.” I replied, “Sorry Buddy” and he answered, “Yeah me too, by the way when are you heading home? I can give you a ride to the bus station”

Going home? I thought, I guess no Turkey for me today. He gave me a ride to the bus station but there were no busses heading anywhere near Lowell that afternoon. I hardly had any money anyway. I asked, “Can you drop me by the highway instead?” and there I landed mid-afternoon on Thanksgiving Day with nary a car in sight.

Well I stood there and then I sat there, Arlo Guthrie’s Alice’s Restaurant playing in my head, when a muscle car convertible with the top down and a young couple in it pulled
over. “Hop in. where you heading?”

“Eventually, Lowell, but if I can get to Providence tonight I’ve got a place to stay hopefully.” They smirked and looked me over and laughed and peeled out of there.

They were high as kites and blasting Led Zeppelin. I crouched down trying to keep warm in the back seat and said my prayers. It was dark when we arrived outside Providence. They dumped me off by the side of the highway and I wasn’t even sure where I was.

I walked for about an hour until I got to my dorm building on Weybosset Street. It was dark inside and the building was locked up tight. I contemplated calling home for a ride but I did not want to ruin their Thanksgiving. I had no idea what I was gonna do.

Then the door opened and it was the custodian. “What are you doing out here?” I told him my sob story and he let me in. “I could get in trouble letting you in here so keep your mouth shut about it. Stay in your room and I will be back in the morning to let you out.”

I was pretty freaked out alone in the building and I went to bed hungry! The custodian came back early and I went out for a run and bought some donuts and coffee. After that I headed to the highway and a truck came along immediately and gave me a ride all the way to the Lowell Connector.

I walked home from there, opened the fridge, and devoured some leftover turkey.