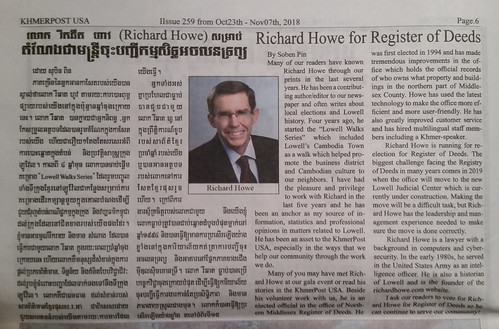 The KhmerPost USA, the Lowell-based Cambodian-English biweekly newspaper, has endorsed my re-election as Register of Deeds. Here is the English language version of the endorsement:

Many of our readers have known Richard Howe through our prints in the last several years. He has been a contributing author/editor to our newspaper and often writes about local elections and Lowell history. Four years ago, he started the “Lowell Walks Series” which included Lowell’s Cambodia Town as a walk which helped promote the business district and Cambodian culture to our neighbors. I have had the pleasure and privilege to work with Richard in the last five years and he has been an anchor as my source of information, statistics and professional opinions in matters related to Lowell. He has been an asset to the KhmerPost USA, especially in the ways that we help our community through the work we do.

Many of you may have met Richard Howe at our gala event or read his stories in the KhmerPost USA. Beside his volunteer work with us, he is an elected official in the office of Northern Middlesex Register of Deeds. He was first elected in 1994 and has made tremendous improvements in the office which holds the official records of who owns what property and buildings in the northern part of Middlesex County. Howe has used the latest technology to make the office more efficient and more user-friendly. He has also greatly improved customer service and has hired multilingual staff members including a Khmer-speaker.

Richard Howe is running for re-election for Register of Deeds. The biggest challenge facing the Registry of Deeds in many years comes in 2019 when the office will move to the new Lowell Judicial Center which is currently under construction. Making the move will be a difficult task, but Richard Howe has the leadership and management experience needed to make sure the move is done correctly.

Richard Howe is a lawyer with a background in computers and cybersecurity. In the early 1980s, he served in the United States Army as an intelligence officer. He is also a historian of Lowell and is the founder of the richardhowe.com website.

I ask our readers to vote for Richard Howe for Register of Deeds so he can continue to serve our community! 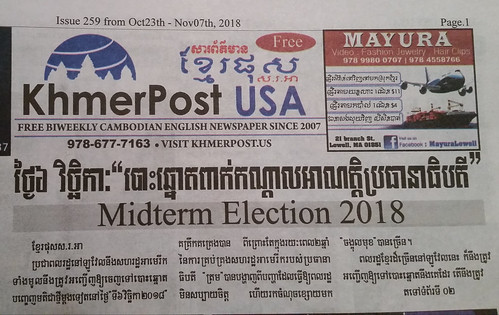