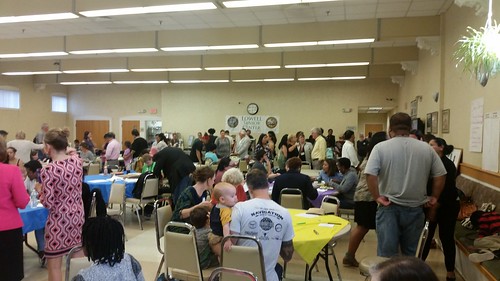 Last Wednesday night several hundred people gathered at the Lowell Senior Center for the first meeting of the Citywide Family Council, the new name for the Citywide Parent Council which had ceased operation over the past five or ten years. This week’s event was hosted by the Lowell Public Schools, Project LEARN, and the Working Cities Lowell Initiative. The event was held in conjunction with the Coalition for a Better Acre’s monthly CHOPPED dinner which often draws a big crowd.

From 1994 through 2008 – the years that my son was a student in the Lowell Public Schools – I was involved in the Citywide Parent Council. I thought it was an important organization that accomplished much to benefit the students and families of the Lowell Public Schools. I also thought that its eventual demise was a lost to the school system. That’s why its revival is such good news.

I’m not sure what the exact objectives of the revived group are – the advertisement for the Wednesday event said “Attendees will help inform district decisions and make every Lowell Public Schools student’s experience better.” – but it might be helpful to share some background information on what the Citywide Parent Council was and how it operated.

The CPC came into existence long before I was involved but my sense is that it flowed from the state’s landmark education reform legislation from the early 1990s. That law overhauled much about the public schools, shifting much of the power formerly held by elected school committees to school superintendents and principals. It also radically changed the state’s school funding formula, much to the benefit of cities like Lowell. (It’s the same funding formula that has not changed through the years and now fails to provide many cities with the education funding needed to meet the goals of ed reform which is why we often hear of the need to “update” the formula).

By the time I became involved in the mid 1990s, here is how the Citywide Parent Council worked: The parents of each school elected two representatives to the Citywide Parent Council (I believe Lowell High was allotted six or eight reps). The CPC would meet once each month during the school year to address issues of citywide importance. So if there was an issue unique to a single school, that issue was to be addressed within that one school community; but by coming together on a regular basis, school representatives could identify those issues that affected more than a single school. It was those issues that the CPC would focus upon.

And how did this “focus” manifest itself? Once an issue was identified, the CPC executive board (which planned future meetings) would place the issue on the agenda for the next meeting. They would also invite guests with information relevant to the issue to participate in the meeting. Also, the CPC executive board met monthly with the Superintendent of Schools (back then, it was George Tsapatsaris). The board would explain the concern raised with the Superintendent who would then direct relevant school staff members to attend and participate in the meeting. And if the issue warranted it, the Superintendent would take immediate action to address it.

The Citywide Parent Council had added reach by regularly appearing on local media. A few days before each monthly meeting, CPC representatives would appear on the WCAP radio morning show to discuss the purpose of the meeting and to invite everyone to attend. CPC representatives were always available to Lowell Sun reporters with a comment on stories about the Lowell Public Schools. And for a time, parents who had taken training at Lowell Telecommunications Corporation, signed out cameras and microphones and videotaped CPC meetings for subsequent telecast on the city’s education channel.

(This was all before Facebook, Twitter and the ready availability of the internet. Today with all of those digital tools, the ability to expand the reach of an organization such as the Citywide Family Council is greatly enhanced).

George Tsapatsaris had a vision of how the Citywide Parent Council should work: He said that each school had two organizations that involved parents. One was the local Parent Teacher Council which was often involved with fund raising for the school through things like Election Day bake sales, or sponsoring events for the school community like Science Night or an Ice Cream Social.

The other school-level organization was the School Site Council. This was something mandated by the Education Reform Law. It required every principal to organize a School Site Council that consisted of the principal, teachers, other staff members, parents and community representatives. Although the principal had final authority over most issues, the principal was prohibited from making major school policy decisions without first consulting with the SSC.

Remembering that each school was authorized two representatives to the Citywide Parent Council, George’s vision was that for each school, one of the CPC parent reps would be a member of the school’s Parent Teacher Council and the other would be a member of the School Site Council. That way, those two parents would each hear directly from the two parent groups in the school and convey issues raised that way to the entire Citywide Parent Council and, conversely, decisions made or matters discussed by the full CPC would be relayed back to the two parent organizations at each school.

I always thought this was a brilliant concept, but it put considerable time demands on parents who got involved which, I think, eventually shrunk the pool of parents willing to participate.

George Tsapatsaris retired in 2000 and was succeeded by Karla Brooks Baehr who was a strong advocate of the Citywide Parent Council, continuing to meet monthly with the CPC Executive Board and supporting the full CPC monthly meetings with staff and resources.

Superintendent Baehr once said, “The only time you can have meaningful reform in the public schools is when parents make a pain in the [neck] of themselves.” Her tenure as superintendent ended at the same time my son graduated from Lowell High which also brought an end to my involvement in the Citywide Parent Council.

Not having been involved in CPC after 2008, I don’t know the reasons for its disappearance from the public school scene. But now it’s back, with a name that’s slightly changed and perhaps a mission that is altered from the original. The important thing is that parents be encouraged to provide meaningful and substantive input into the operation of the Lowell Public Schools. Tuesday was a great start. 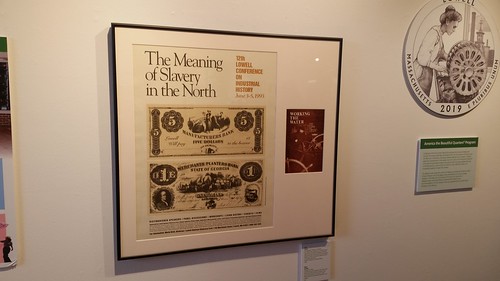 The Brush Art Gallery at 246 Market Street launched a great new exhibit yesterday, “Making Connections: The 40th Anniversary of Lowell National Historical Park.” It’s a wonderful exhibit, filled with many interesting photos, posters and artifacts. If you’re a longtime Lowellian, it revives memories of past milestones and programs of the National Park. If you’re new to the city, it’s a great way to learn how the Park’s current manifestation came to be. The exhibit continues through November 3, 2018. 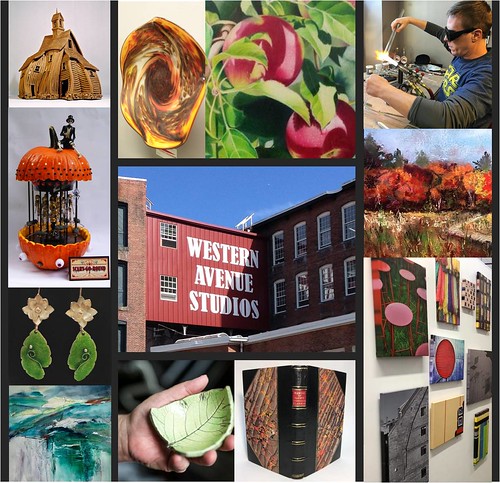 The first Saturday of every month is a great time for art lovers in Lowell, but that will especially be the case next weekend, October 6 and 7, when Western Avenue Studios holds its ARToberfest weekend. Western Ave has five-acres of floor space that hold more than 300 artists, the largest collection of artists on one place east of the Mississippi River, I believe. In addition to artists opening their studios, doing demonstrations, and selling their artwork, there will also be food trucks and craft beer. ARToberfest is held from noon to 5pm both Saturday and Sunday of next weekend. 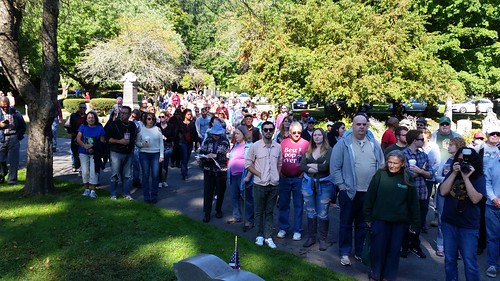 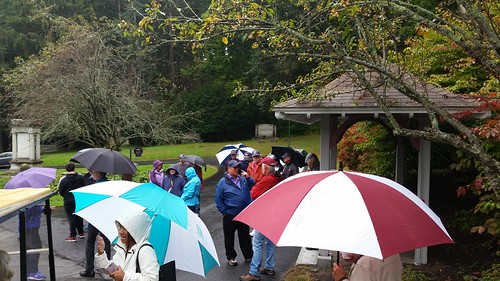 Thanks to all who attended this fall’s Lowell Cemetery tours. With rain threatening on Friday afternoon, just 25 people participated in that day’s tour. But Saturday morning’s tour made up for that with 187 participants. Please check back in March for dates for the Spring 2019 tours. 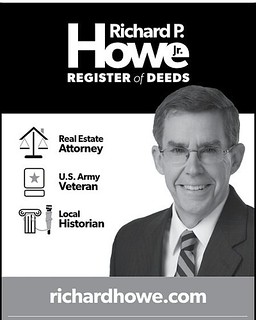 The Howe campaign will hold a reception tomorrow night at the UMass Lowell Inn & Conference Center from 5:30 to 7:30 pm. The suggested donation range is $25 – $50 – $100, but everyone is welcome to attend regardless of any contribution. We’ll also be asking for volunteers for various election tasks which will pick up in intensity as election day approaches.