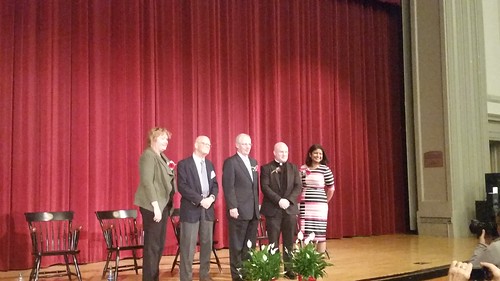 Ken Wallace previews this year’s Lowell High School Distinguished Alumni ceremony. The names of the 2018 inductees will be announced early next week.

LOWELL—-The city’s high school has certainly gone through a rough couple of years as the community was deeply divided over keeping the school downtown or building a new campus-type facility on the Lowell/Tewksbury line. The debate got pretty rough and often the facts were pretty distorted. Good friends saw relationships shattered.

But the issue was ultimately decided in the most democratic way.  The people voted and 61 percent said to keep the High School downtown. I would like to think the majority of the people who voted for downtown did so as a matter of pride, a matter of history and because in a city like Lowell, a central location makes a lot of sense.

LHS has a lot of history and an amazing alumni. The high school was born during a major controversy between residents and the powerful mill owners who at the time paid the entire cost of public school up to the eighth grade.  The citizens in the 1820s felt it was time for Lowell to expand to a high school. The mill owners said “No,” that an eighth grade education for the children of mill workers was adequate.
Back then, the issue also went to the citizens of Lowell who voted in favor of adding a high school, even if they had to pay for it.

In 1826, Lowell welcomed its first high school class. In a short time, Lowell became the first city in the state to have a co-ed high school and an integrated high school.

The first class, by the way, included two men who became governors, one of Massachusetts, the other of New Hampshire. It also included a student who went onto great success in business and at one time was among the wealthiest men in New England.

I bring this all up because I just finished reading the biographies of the five people who will be inducted as the 2018 class of Distinguished Alumni of LHS later this year. The committee is in the process of contacting the inductees and planning for the ceremony in the fall.

This year’s inductees include four men and one woman, all of whom have had wonderful careers in a wide variety of fields including medicine, government, education and the military. Beyond successful careers, I was struck by the common thread of human kindness that clearly marked the lives of these LHS graduates.

The doctor, who was also a pilot, flew a rented plane to remote Indian reservations and provided free medical care to people who had no services.  Later, for a month at a time, he would bring free care to outposts around the world and volunteered his time and money at various homeless shelters. The woman, who was a trailblazer for women in the military, actually spoke out to the then President of the United States about the way men of color were treated in the military. All five were deeply involved in their communities and honored the code of giving back.

I don’t wish to relive the high school controversy but would like to remind the folks who pay for our public schools that they have much to be proud of in the LHS graduates they have sent out to do good in the world. The new facility will enhance the opportunity to create new generations of folks who will continue to make a difference.