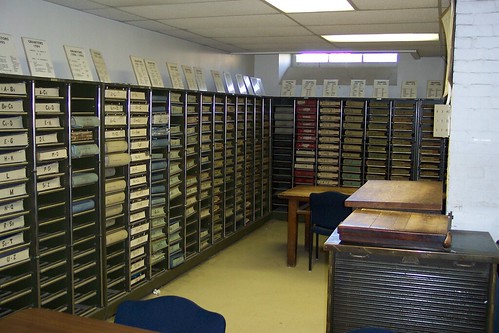 From hand-copied book pages in cursive to digital images that have never existed on paper, the records at the Registry of Deeds have become more accessible through the evolution of information technology. Here’s the story of how that has happened at the Middlesex North Registry of Deeds:

One of the basics of the Massachusetts land records system is that the registry of deeds only makes a copy of the original real estate document which is returned to its owner once the official copy is made. That’s how the system worked back in the 1600s and that’s how it works today. However, the tools we use to make and maintain those copies have changed through the years.

From the 1600s up until 1924, registry clerks would hand-copy original documents using pen and ink. Rather than file these copies by address or owner name, the registry inserted these copies into bound record books in the order they were received. Each book was given a number and each page within the book was also numbered. The book and page number where the document could be found became the unique identifier of that document. That same book and page numbering system is still in use today despite major changes in how records are created and stored.

The first big change in record-creation came in 1924 when the registry began using typewriters to make the official copies of recorded documents. Subsequent changes in record-creation accompanied new technologies. For instance, during World War II, the use of microfilm as a document storage medium became widespread and affordable. Soon after the war, the Registry of Deeds adopted that technology to create backup copies of records that could be stored safely offsite. (The previous disaster recovery plan relied on “fireproof steel storage cabinets” located within the registry).

Along with microfilm as a storage medium came the ability to make highly-legible paper prints from the microfilmed document image. This new technology not only save a substantial amount of employee time that was previously devoted to retyping entire documents, it also yielded an exact replica of the original document, complete with signatures, stamps and other markings. Beginning in 1949, these paper prints from microfilm were used to create the pages of registry record books.

This method of creating record book pages from microfilm prints continued up until 1995, the year I became register of deeds. Just a few months earlier, in November 1994, the registry had installed its first computerized document scanner, a Wang product, of course. Registry personnel would scan newly recorded documents to produce digital images that could be viewed on public workstations at the registry and via a dialup modem for remote users (who were charged for access). But the same digital image intended to be viewed on screen would also yield an excellent paper print of the recorded document, so we switched book production from paper prints from microfilm created to paper prints from scanned images. Not only did the scanned image create better quality book pages, they could also be produced in-house with existing personnel and equipment which resulted in substantial cost savings and a much faster method of getting books on the shelf.

Scanning digital images of original paper documents remain the primary means of creating official registry document copies today. However, we did stop producing paper record books in 2001, both as a cost-savings measure and because we were running out of shelf space to store the new books. Thereafter, the official registry copy of a recorded document was a digital image with microfilm backup. Although paper record books are no more, the same book and page numbering system continues as the primary method of identifying documents.

To provide some idea of the savings that this shift away from paper created, consider that from 1855 (the year this registry opened) up until 2001 (when the last paper book was printed) the registry had accumulated 12,442 record books. In the 17 years since then, we have created 19,700 digital-image only record books. Given that the cost of producing a single record book in 2001 was approximately $50 in paper, plastic cover, printer toner and employee time, that has yielded savings of $985,000 in 2001 dollars, not to mention the additional costs for shelving and floor space for that many additional physical books.

Advances in technology continue to cause Registry of Deeds procedures to evolve. In 2005, Middlesex North became the first registry of deeds in Massachusetts to implement a full program of electronic document recording. This allows attorneys, lenders and other real estate professionals who sign-up for secure internet connections with the registry of deeds to record documents electronically. By that method, the submitter scans the original paper document at his or her office and transmits the document image and indexing information electronically to the registry. At the registry, the incoming image fills the screen of a recording terminal. If all is in order, the registry employee clicks “record” and the document is immediately filed in the registry records with recording fees being paid by an electronic transfer of funds from the submitter’s bank to the registry’s bank. In 2017, electronic recording accounted for 55 percent of all recordings at the Middlesex North Registry of Deeds.

The next generation of electronic recording, already legal and feasible but not widely used, involves documents that are created, displayed, executed and acknowledged purely in electronic form. The Middlesex North Registry of Deeds is already capable of accepting such recordings which will become more widely used as younger home buyers who have known nothing but electronic commerce, force the real estate and lending industry to dispense with paper and transition entirely to digital transactions.

One Response to The Evolution of Land Records