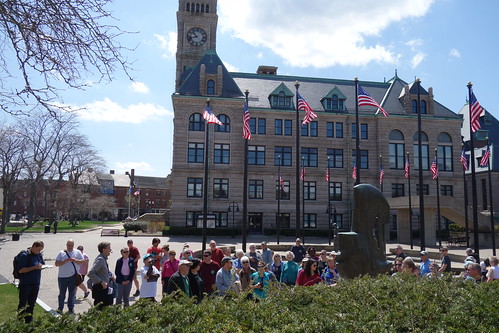 I was unable to watch the Tuesday, May 8, 2018, Lowell City Council meeting live, but viewed a replay on LTC. Here are my notes from the meeting:

Presentation by School Department on FY19 school budget. School Committee member Jackie Doherty speaks of the inadequacy of the “foundation budget” required by the state. She says the cuts proposed this year “are not sustainable” particularly nearly $1mil cut from Lowell High despite “amazing progress” shown at the high school in attendance and academics. These cuts will reverse those positive trends. She asks the council to fully reimburse the school for its Medicaid expenses (schools provide the services, state reimburses, city keeps the reimbursement). She also asks the city council to lobby the state to change the foundation budget.

Councilor Elliott agrees the city should join with other communities to urge the legislature to adjust the foundation budget so that it’s fairer. Says he would like to hear from the City Manager on this but he thinks it should be done at a joint subcommittee meeting.

Councilor Mercier says she is concerned about people losing jobs when cuts are made. She says the cuts should be made from the top not from the people at the lower levels. She also makes a motion that the council pass a resolution urging the state legislature to adjust the foundation budget.

Councilor Kennedy says he supports the special meeting. He says the “maintenance of effort” schedule has always been a point of disagreement between the schools and the city. He’d like to go through it in detail and reach agreements about what should and should not be included in that. He says the state’s refusal to fund charter schools also contributes to this problem. The state puts the cost of charter schools on the backs of city’s like Lowell. This year, charter schools will cost the city $21 mil even after the state’s charter school reimbursement.

Councilor Nuon says legislators from across the Commonwealth should commit to changing the foundation formula. He also says he is troubled by the proposed cuts of teachers and library aides. Councilor Milinazzo says he supports both motions. Councilor Conway asks the school committee to look for other areas to make cuts because some of those proposed don’t make much sense to him. Councilor Cirillo says it’s important to fix this so the same problem doesn’t reoccur. Councilor Leahy says the same thing.

City Manager Donoghue says the foundation budget was created back in 1993. That formula has only been tweaked a few times since then. In her time in the senate, they worked on this extensively, but she does say that the state has shirked its responsibility to keep the formula up to day. Then she says that having served as mayor of Lowell, she knows very well the importance of the schools to the city. But she adds that the city has a very tight budget and many issues that must be addressed. No city departments received increases; almost all are facing cuts. The draft city budget includes a 2% tax increase plus taking $2mil from the stabilization fund. She says to fund the $3+ mil needed by the schools would require another 2.5% increase in taxes. And this budget does not include raises in FY19 yet all city employee contracts are up for renewal this year. She goes through all the various pressures on city budget. She does say she would not recommend anything that causes a large tax increase.

C) Paving – DPW director explains the process for determining which streets get paved each year.

G) Broadcasting from Mayor’s Reception Room: Report estimated $170,000. Councilor Kennedy questions the amount. It turns out it was pay for a comprehensive solution for replacing equipment in the council chamber and adding cameras to the Mayor’s Reception Room. Kennedy says that in light of the fiscal constraints, he only wanted the minimum. City Manager Donoghue says she bring back a more detailed report with various options. Discussion about whether the matter should be taken up in Executive Session, but solicitor says this discussion is only about training not about that particular incident and the portion to be discussed is already a public record.

H) Lowell Police Dept. Training – Chief Taylor explains that the report provides a comprehensive overview of all types of training at the police department. He says they take training very seriously. Says the city provides little funding for training but the Lowell Police provide a lot of training for other police departments. This provides revenue that is then used to pay for training. Goes into greater detail on additional training, on updated policies and procedures. He says it took longer than anticipated to find the proper training for civilian detention attendants.

City Manager Donoghue thanks Supt Taylor for his 30+ years of service to the city of Lowell (he retires on Tuesday).

Resolution – Support MA House Bill 2683 Senate Bill 1845 (An Act to Protect Consumers of Gas and Electricity from paying for leaks of gas). Jay Mason speaks. Explains how leaking gas contributes to global warming. He adds that we should be moving towards alternate energy sources and not sticking with technology that is harmful to all of us. Representative from local Sierra Club says the club supports this resolution. Councilor Kennedy says National Grid purposely ignores smaller leaks and allows gas consumers to pay for the escaping gas.

Economic Development SC May 8, 2018. Meeting earlier today heard a proposal to build a Hilton Hotel in Hamilton Canal District. Referred it to DPD.

Leahy – Req. City Mgr. work with DPW to develop best practices for inventory control as it pertains to land and buildings in the City.

Mercier – Req. City Mgr. provide a report regarding why sidewalks are not being done as part of paving projects in the City; in addition fined ways and means to do same. (per example C. St.)

Nuon – Req. City Mgr. have Law Dept. draft an ordinance which would require City bid construction/development projects of a certain size which may involve TIF’s and within the Hamilton Canal Innovative District adhere to minimum work force standards for the employment of minorities and women which mirror current State/Federal requirements.

Conway – Req. City Mgr. report on the status of the crossing light at Douglas Road and Andover Street.

Conway – Req. City Mgr. provide update on road construction at the VFW Highway across the street from Top Donut and the Aiken Street Bridge.

Samaras – Req. City Mgr. have DPW look into repaving the playground at the Rogers School.