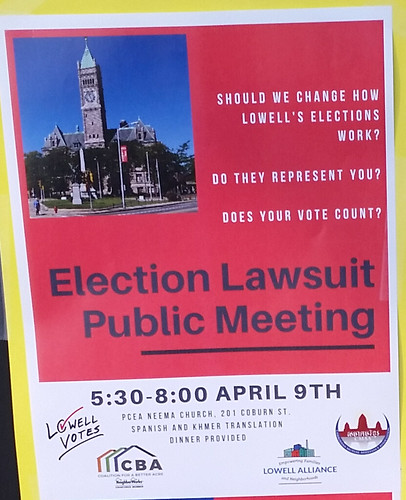 Mimi Parseghian attended last week’s public meeting on the lawsuit brought by some Lowell residents against the city for alleged violations of the Federal Voting Rights Act. Here’s her report:

Last Monday, April 9, a public gathering took place at the P.C.E.A. Neema Church, located on Coburn Street. It is the worship house of the Greater Lowell Kenyan-American community. The meeting, sponsored by four Lowell civic organization, Cambodian Mutual Assistance Association (CMAA), Lowell Votes, Coalition for a Better Acre (C.B.A.) and Lowell Alliance,  focused on two areas: one, increasing civic participation from the underrepresented groups in our City and the second, on the federal lawsuit filed last May by a dozen Lowell residents “alleging that the city’s municipal election system discriminates against minorities.”

The evening agenda consisted of two Power Point Presentations; one on the voting process and the other on the possible redistricting map. We also gathered into small discussion groups to exchange our opinion and our experiences with election participation and interaction with our local government.

The majority of the discussion focused on what avenues must be open to encourage everyone to interact with the various government agencies as well as elected officials. We also talked about the “obstacles” to voting.

The focal point of the evening was the presentation, Oren Sellstrom, litigation director for the Lawyers’ Committee for Civil Rights and Economic Justice, the group that filed the lawsuit on behalf of the plaintiffs.  He was accompanied by one of the attorneys from the Boston law firm Ropes & Gray, who have a legal team representing the plaintiffs on a pro bono basis.  Attorney Stellstrom outlined the basis of the lawsuit, gave us an update and detailed what the plans are going forward.

Lowell Telecommunications Corporation (LTC), our local access stations, filmed the meeting. If if you want to learn more on the subject, please watch and listen to Attorney Sellstrom remarks when LTC uploads the video. It is essential that we have an informed public so that the discussion and decisions are made in the best interest of the entire City.

Although there was a large crowd at the start, some had to leave to attend other community events that night. This was a good beginning for a public discussion that is necessary if we are going to come to some mutual understanding without the acrimony that occurred during the Lowell High School renovation debate.

It was a positive sign to see four City Councilors present and engaged. Councilors Karen Cirillo, Vesna Nuon, Rodney Elliott and Ed Kennedy were in attendance. I do not know how many Councilors want to come up with a plan rather than have the courts decide.  Although, there is a Sub-Committee appointed to address this issue, “City Council Ad Hoc Charter Review – Voting District Representation,” they have not yet met.  The previous Council’s same sub-committee met once last fall.

I realize that a lot of the discussion by the City Council and the Administration needs to be in Executive Session but isn’t there is an equal obligation for the City Government to provide some kind of statement to the public as to what our position is and what we intend to do. Attorney Stellstrom believes that the judgement will be rendered prior to the next election, fall 2019.

Attorney Sellstrom provided statistics during his presentation. Two stood out for me. First, the Lowell Public School System is about 70% majority-minority.  The City’s population is on the “cusp” of becoming majority-minority.

By far for me the highlight of the evening was meeting and interacting with Lowellians that I would not have the opportunity to meet otherwise. I am referring to a young man who came from Nepal to Lowell 2 years ago with his family. I am also referring to a mother and her young adult son who came from Liberia a few years ago. They love being here, want to be part of the community and cannot wait to become citizens.