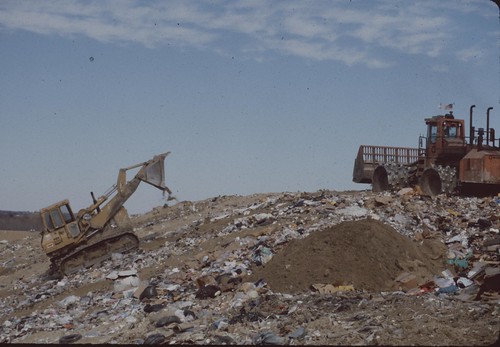 I suspect everyone knows that plastic bags are harmful to the environment. The very qualities that make them useful – they are lightweight, strong, inexpensive and water proof – also make them a problem. They do not biodegrade which means they do not deteriorate naturally, they only fragment into smaller pieces that do not deteriorate. Because they are lightweight and cheap, people are often careless in disposing of them, so they add to our problems with litter. Also, they are difficult to recycle and are not supposed to be placed in our green recycling bins (when they are, they tend to clog up the machines that separate our single-stream recycling materials).

When City Councilor Karen Cirillo proposed a modified plastic bag ban for Lowell at last Tuesday’s council meeting, most of her colleagues gave it a lukewarm reception. (Councilor Kennedy was the one exception to that, speaking strongly in support of the concept). The council did send it to the council’s environmental subcommittee for further study by a 7 to 2 vote (Councilors Mercier and Elliott opposed). As I understand it, the environmental subcommittee for this council will consist of Councilors Cirillo (chair), Elliott and Kennedy.

When the environmental committee does take it up, hopefully its members will devote plenty of time to the issue and take testimony from the public and from experts, both in the environment but also in retail, since one concern expressed by councilors was that if plastic bags are banned, the substitute – presumably paper – will be more expensive which would add to the fiscal burden of those already living in poverty or on fixed incomes.

Besides the cost argument, several councilors said that a bill that would accomplish this statewide is pending in the legislature and that the city should wait for the legislature to act. I suspect that if you spoke with members of the legislature, they would say it would be easier for them to pass this bill if more municipalities went ahead and enacted it first.

Then we had the “we live in Lowell, not Cambridge” argument. Ed Kennedy pushed back against that sentiment, saying “We might not be Cambridge, but we are Lowell and we should discuss this.”

The next night, while catching up on the Sunday Globe, I noticed this item: “Haverhill to look into banning plastic bags,” a short piece that said the following:

Haverhill may soon join the other 61 communities in Massachusetts that have banned single-use plastic shopping bags. City Councilors Michael McGonagle and Mary Ellen Daly O’Brien are leading the effort. “My kids call the bags ‘urban tumbleweeds,’” said McGonagle. “Eliminating them would pay dividends to the city for years to come.” Daly O’Brien encouraged Haverhill to follow Newburyport’s example and eliminate the use of the bags that may hurt the environment, especially wildlife. The council unanimously voted to charge the Community Advisory subcommittee with researching whether to require stores to use paper bags if shoppers do not bring their own reusable bags.

I wonder how many in Haverhill used the “We’re Haverhill, not Cambridge” argument in opposition. None of the Haverhill councilors, apparently, since they voted unanimously to at least study the measure.

The Sierra Club website has a lot of information on the harm caused by plastic bags and the measures being taken in Massachusetts to curtail their use. It also states that there are 61 cities and towns in Massachusetts that have implemented plastic bag bans along with a matrix showing the various ordinances.

That’s not bad company for Lowell to be in.

Finally, if you survey young people in Lowell, or young people going to school in Lowell, I doubt this is a controversial issue. Most of them place protecting the environment pretty high up on their list of priorities, and they are not content to wait for someone else to act. Consequently, if a community like Lowell wants to attract and keep young people, embracing measures that help protect the environment will help do that.

All candidates running for Lowell City Council fall under the Massachusetts Office of Campaign and Political Finance (OCPF) for fund raising, campaign spending, and financial reporting. Each candidate must file a 2017 year-end report by midnight on Monday, but all of the more frequent election year reports on which that one is based have already been filed.

The OCPF website is very transparent. For each candidate, it shows who contributed how much, and how the money was spent. While many other factors affect the outcome of a political race, money has a big impact. To gauge how much of an impact money had on the 2016 Lowell City Council race, I’ve listed below the 18 candidates in order of finish. I visited each candidate’s page on the OCPF website, and did a query for all activity between January 1, 2017 and December 31, 2017. The bi-monthly bank reports showed how much each candidate had on hand at the start of the year, and how much was left at the end of the year. The “data” report showed how much was raised and how much was spent during the year. (And let me acknowledge in advance, the numbers do not always add up, so you’re welcome to drill down into the details to find out why).

Before going through the numbers for each candidate, here are the highlights:

Here are the numbers for each candidate for calendar year 2017: 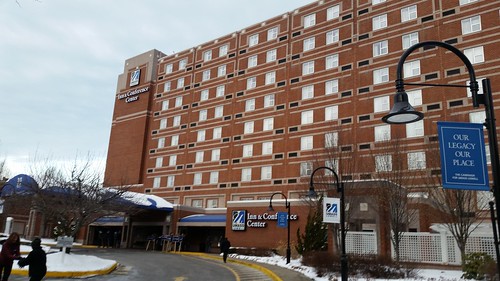 Approximately 200 candidates, campaigners and activists gathered this weekend at the UMass Lowell Inn & Conference Center for the Massachusetts Democratic Campaign Institute. Attendees were offered three separate “tracks” of sessions: one for present and future candidates; another for campaign workers; and a third for activists. Enthusiasm was high, especially among the many women in attendance. And current campaigns, especially those for the Third Congressional District and for statewide offices, were much in evidence. 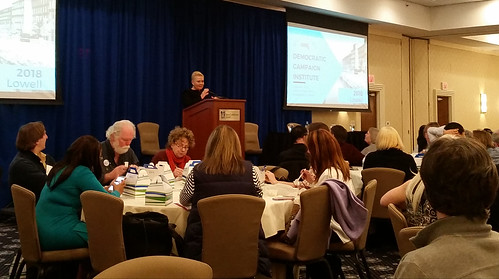 The keynote speaker yesterday was Mary Anne Marsh, a very savvy and experienced Massachusetts political operative who is now a principal in the Dewey Square political consulting group and a frequent presence on state and national media as a Democratic political analyst.

I took notes during her speech, and while the following is by no means a verbatim transcript, it captures much of what she said:

As bad as Trump is, the best thing is how everyone has responded to him. When the going got tough, everyone got tough on Trump, especially women. There is a straight line from the Women’s Marches that came the day after Trump was inaugurated to everything that has come since, especially the protests against the Travel Ban and the #MeToo movement. Women have been energized politically as is evident from the results of the Virginia state election and the special US Senate election in Alabama. Women have shifted the balance of power and women have led the way.

What has happen also instructs us on what is needed going forward. Electing Democrats is the bare minimum that is needed. This is about saving our democracy. It’s a much bigger cause. In 2015, I said publicly that Donald Trump would be the Republican nominee. Everyone thought I was crazy but that is what happened. I saw it coming, and I say what I see, not what I wish or what I want.

Today, I see our democracy being dismantled with a sledge hammer by Donald Trump every single day. You have to stand up every day to what they are doing.

For far too long, people took our democracy for granted. People didn’t vote; they didn’t protest; they didn’t pay attention. They took things for granted, for instance, that Hillary Clinton would win the presidency. In 2001, despite ample intelligence that told us that terrorists were planning to crash planes into the World Trade Center, we could not imagine that happening, so we did nothing about it. The same thing happened in the 2016 election. Everyone assumed Hillary Clinton would win. They couldn’t imagine the alternative.

In a democracy, it’s supposed to be majority rule. It’s not rule by the 35% who support Trump, nor is it rule by Trump’s staff, nor is it rule by Trump himself. But that’s exactly where we are heading. Consider this: we are all comfortable with having three high ranking generals placed in top civilian positions at the head of our government just to stop Donald Trump from impulsively doing something to threaten our collective safety. Consider that Donald Trump is making money from the government every single day, especially with his many trips to Mar a Lago. Just before the election, there were payoffs to many women to keep them silent. Where did that money come from; where did it go? These are the kind of things that are destroying our democracy.

Each of you must ask yourself what will you do? What side of side of history will you be on? Will you set an example?

Two weeks ago, Donald Trump was told that there would be a Democratic wave in 2018. He dismissed that, citing how unified the country had become behind George W. Bush after 9/11. What did he mean by that? What is he talking about? What does he intend to do?

The Mass Democratic Campaign Institute continues today at the ICC (although it will be done in plenty of time for the Patriots’ game). 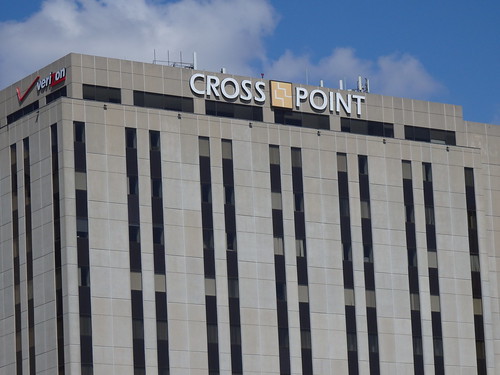 I don’t profess to understand how this ultra-high end real estate financing and ownership works. I assume we won’t see a “under new management” sign on the site, nor will we notice anything different. I do know that the transaction enriched the Commonwealth of Massachusetts by $1,036,032, due to the deeds excise tax collected when the deed was recorded. (The tax is assessed at a rate of $2.28 per $500 of purchase price).

$227 million! Quite a change from the $525,000 purchase price for the same buildings back in 1994 at the Wang foreclosure auction.

In other real estate news, the Massachusetts Supreme Judicial Court issued its decision this week in the case of Grand Manor Condominium Association, et al, vs. City of Lowell. Back in the 1980s, the city sold a parcel of land to developers who constructed the Grand Manor Condominium complex on it. Unfortunately for all involved, decades ago, the city had used this site as a dump which means all kinds of things are buried beneath the condominiums. When hazardous waste was discovered within the past decade, the condo association sued the city under the Massachusetts Oil and Hazardous Material Release Prevention Act. In the Superior Court, a judge dismissed the case, ruling that the suit had not been filed within the applicable statute of limitations. This week, the SJC reversed that decision, holding that the suit was filed on a timely basis and remanding the case back to the Superior Court. I’m not sure of all the implications of this, but I believe this state statute (MGL c.21E) creates strict liability, so this may yet prove costly to the city. 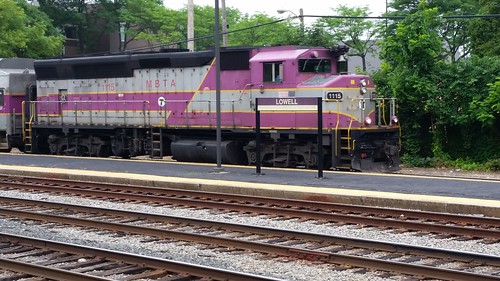 Finally, the Union Leader reported this week that New Hampshire governor Chris Sununu, who had previously opposed an extension of commuter rail service from Lowell to Nashua, Manchester and Concord, NH, has now included $4 million to study the proposal in a recently released 10-year state transportation plan.